Ivan Zoot, director of education for Andis, took the challenge to break three Guinness World Records for hair cutting and was successful across the board. Zoot set up shop at Rooster's Men's Grooming Center in Austin, Texas and he and his Andis Clipper sped through 340 hair cuts in 24 hours, beating the previous record of 300. He performed 34 cuts in one hour, eliminating  the old record of 23 and recorded the fastest hair cut--55 seconds, breaking the previous record of one minute 11 seconds. The cuts were monitored by Guinness-approved witnesses. The event was co-sponsored by Woody's Men's Grooming products and all proceeds were donated to two charities: Children with Hair Loss and Big Brothers, Big Sisters of Central Texas. "These incredible results show that the Andis revolution cutting system, perfected over ten years, is superior for improving hair cutting efficiency," said Zoot. "Andis' well-designed, high quality tools combined with this cutting system make it possible. For more information, visit www.andis.com 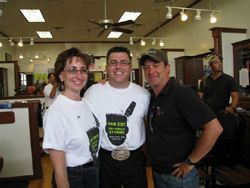 Take a tour of the D Anthony Salon in Nyack, NY and see it through the eyes of owner D Anthony.

Amika Team to Be Honored by City of Hope

The amika team will be honored with the City of Hope Spirit of Life Award.

Beard Oil and After-Shave Gel are introduced with more products to roll out in months to come.

Regis and EEG entered into an agreement pursuant to which Regis will sell its interest in EEG in exchange for de minimis cash compensation, an exclusive private label supply agreement, and an employer of choice arrangement.

The winning team will travel to Milan in March to represent at the worldwide competition.

A strong presence, impactful branding, and so many offerings in one spot made the new BBI booth one busy place.