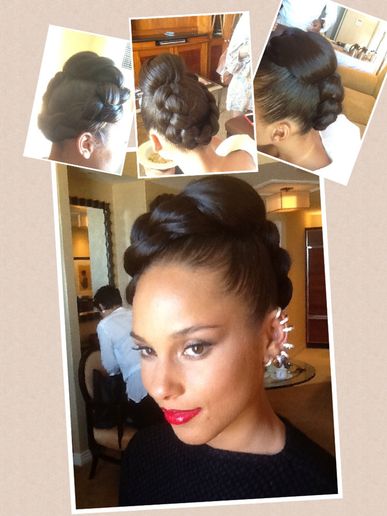 At the Billboard Music Awards May 20, 2012, Alicia Keys sported a body-hugging, long-sleeved black Azzedine Alaia gown that screamed chic. Though, we doubt it was comfortable to rock that look, given the Vegas high temps that beg for minis—Keyes certainly pulled it off!

Her glittery shadow, top-lid-only liner and red lips showed off her flawless skin—while her body jewelry and multi-pierced ears added some glitz the stars' glamorous look.

Keys won't only be remembered for her outstanding performance alongside Stevie Wonder, but for her slicked-back, elaborate braided hair style, created by editorial and celebrity stylist Tippi Shorter.

"This style was an editorial take on the braid I did for Alicia in her No One video," Shorter says. "It just seemed perfect for the dress and the show."

Keys’ hair was first shampooed and conditioned with the smoothing collection from Hair by Tippi Shorter. A revitazling mist was used to detangle and protect the hair from the hot Vegas sun. Then, her hair was blown smooth using the Brazilian Heat After Dark 1900 watt AC motor dryer. 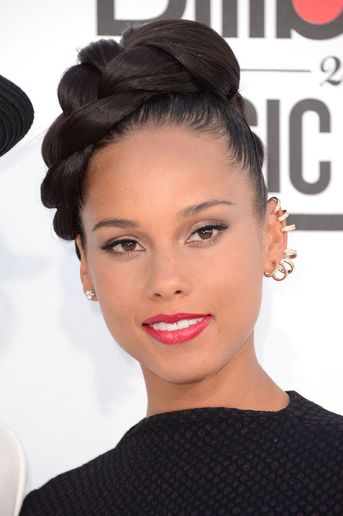 Next, her hair was gathered in a high ponytail and secured with a bungee band. A pliable wax fwas used to smooth the hair and prevent flyaways.

Then, Shorter used a small amount of the wax on her fingertips, as she braided the ponytail—adding in pieces of human hair extensions to make the braid bigger and wider. Then, she wrapped the braid around, crown-like until she came up with the shape that had balance and elegance for the "white carpet." "Baby" bobby pins were used to secure the look.