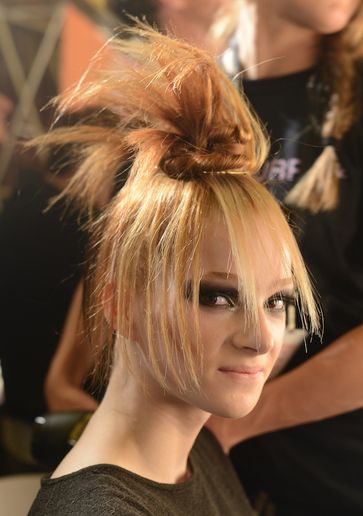 At Melbourne Spring Fashion Week 2012, Kevin Murphy really wanted to make a statement for the hair at RMIT and Heroes of Tomorrow. To achieve this, he created a futuristic Mohawk shape that was seamless. “Because the shape was so hard and structured, I used soft golds and apricot, peach blondes and soft chocolate browns,” he says. “I wanted the hair to almost look like crystal caves in Mexico.”

Murphy’s inspiration was largely drawn from the Manga cartoons of Japan, especially Astro Boy. “There was such a wealth of creativity in this show with so much passion from the students who helped create it," says Murphy. "They were excited to see their outfits showcased. It became so emotional to feel the passion and excitement.”

The look was pulled into two ponytails, one containing all the back and sides of the hair and one on top of the head. The ponytails were tied into knots and little spikes were left out. “I added weaves to the perimeters of the hair and used KEVIN.MURPHY’s TEXTURE.MASTER and a blow dryer to hold them in place. The spikes were then pulled forward and the pieces were blunt cut to finish,” says Murphy.

STEP 1: The hair was pulled into a ponytail that included the back and sides using a horse shoe section.

STEP 2: The top section was made into the second ponytail.

STEP 3: The two ponies were tied into knots and the ends were left out and ironed so they looked spiky.

STEP 4: Short extensions were placed around the perimeter of the horse shoe section.

STEP 5: TEXTURE.MASTER spray was sprayed onto the extensions and a dryer was used to blow them into position.

STEP 6: Multi-colored pieces of golds, peaches and chocolate browns in the hair were used to make the thick streaks. Each model had around 6 to 8 pieces in various colors.

STEP 7: Once the ends were set and dried with a great deal of TEXTURE.MASTER, the pieces were cut blunt to give the hair a strong solid look.

The individuals who make up the workforce behind salons and barbershops around the country are asking their elected officials to #KeepUsWorking safely through the global pandemic.

The Most Read MODERN SALON Stories of 2020

While COVID-19 relief was a guiding theme, our community proved that pandemic pains won’t stop their love of trendy bobs and silver white color transformations. Here are MODERN SALON’s top stories of 2020. Missed some? Now's your chance catch up.

The J.Protect lighting system disinfects up to 99.9% of pathogens in indoor spaces and is safe to use when employees and customers are present.

Sonsoles Gonzalez created Better Not Younger specifically for aging hair, changing the landscape for women who have long been underrepresented in beauty.

This New Air Purifier Can Help Eliminate Viruses in Your Salon

Because of the increased risk of infections in closed environments, clean air is an important consideration for businesses. So, allow us to introduce you to AiroDoctor, a compact and powerful air purifier and sterilizer that could benefit salons.

From a new convergence between healthcare and wellness to a much bigger focus on nature, immunity and “home wellness” to wellness expanding its boundaries to once-taboo issues like sex, money and death

The campaign is set to underscore these values that propel the brand to be “a friend to hair, hairstylists, to her, him, them and you.”