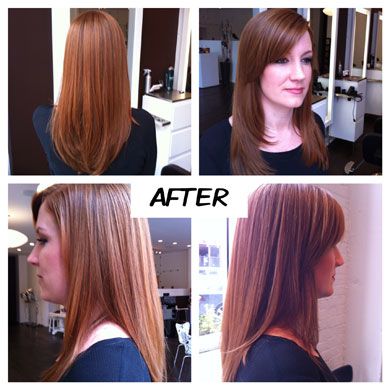 MODERN's own Katharine Cook has had the same look for years. Granted, it's a beautiful look, but she was ready for a change. She turned to Chicago's Genacelli Salon owner Joseph Cartagena, president of Cosmetologists Chicago, for the big change.

Helping Cartagena for the day was Erica Everson, who works with Genacelli at his neighboring salon, East Studio.

"Katharine came in with a Level 7 color naturally at the base--she was close to a 6, but definitely a 7," Cartagena says. "She was between a 7/8 on her ends with highlights and lowlights. The goal really is to create a red that doesn't  'scream,' and has a natural finish with lots of variation."

"The cut itself is very simple," he says. "She had quite a bit of layering on the bottom, but not enough in the interior. Using the Alternating Layering technique, we're going to be taking vertical panels, releasing the tension, and cutting one section from short to long, and the next section from long to short. The result is an organic-looking movement that's really beautiful."

WE WANT TO SEE YOUR WORK! Want to be modernsalon.com's next featured artist? Send your work, and info on how you did it (color formulas, steps on styling or cutting method, etc) to MODERN's Alison Shipley ashipley@vancepublishing.com.

My NuDo Rejuvenating Shampoo is formulated with invigorating ingredients for visible results within 2 to 3 weeks.

Because no one knows sore arches and heels like hairdressers, this foot spray can ease some of the pain.

It has been one year since the World Health Organization declared we were living in a pandemic. The stress of this reality can impact our health, physically and mentally. Here are tips to help us stay well from an award-winning scientist who has devoted his career to mental health and researching the brain.