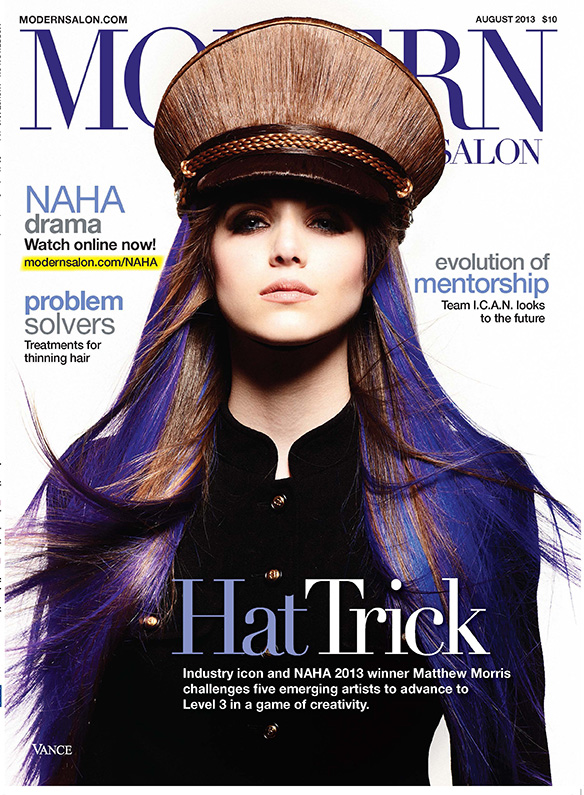 The Matthew Morris Salon in Denver, Colorado, offers five levels of hairdressers to its clientele. Each level is based on talent, experience and expertise. The photoshoot for this cover was created by salon owner Matthew Morris and five Level 2 hairdressers, each with an eye to Level 3.

Reaching Level 3 requires intense creativity, including portfolio building, story boarding and presentation. “The level system was created to inspire creative interpretation, teaching Level 2 artists to take their visions and inspiration and be able to communicate visually through photoshoots,” Morris says. “This evolves the contenders to the next phase of their careers, teaching them to not only to do great hair but to also create great hair for a photo.” This level takes the skill of the artist to the next level, preparing each to be on the Matthew Morris Design Team and eventually the Education Team.

According to Morris, who knows a thing or two about professional photoshoots (he’s a regular at the North American Hairstyling Awards and was featured on season 3 of Shear Genius), Level 2 stylists Meredith Boles, Jillian Berres, Chrissy Neidig, Lori Fleagle and Jessica Painter are “so amazing” that he decided to do something unique to truly challenge them.

“I’ve been thinking about the ‘Hair Hat’ concept for several months,” says Morris. “I decided this was the perfect time to enlist the help of these five artists to bring the concept to life.” Morris had what he called a “pow wow” to go over the details, direction and concept, and then stepped away. “I knew it was going to be hard for them to envision,” he says, “but I wanted to make that part of the learning exercise.”

Knowing it was a challenge, Morris appreciated the struggles and obstacles the artists faced. “They learned so much from this process,” he says. “In addition to creating the hats, they participated in the casting of models, fittings, make-up concepts, lighting and hair design. They were part of the process from beginning to end.”

Although Morris acknowledges that he was the leader, he feels that his team made this shoot cover worthy. “I knew they were going to wow me,” he says, “but they ended up wowing themselves as well. They had never seen a shoot from beginning to end. They can now appreciate the whole concept. It was a great moment for all of us when we saw the final pictures. I am so proud of them.”

And there is great news. Not only does each now have a cover to her credit, each has now reached Level 3!

How to Take Your Consultations to the Next Level? Ask Hair AI™

Proprietary technology and advanced artificial intelligence display magnified images and evaluate the conditions of the scalp and hair strand.

Going ‘green’ shouldn’t sacrifice quality, and the professional beauty industry should have more options to be sustainably beautiful.

Save Me From Hair Care Committed to Suicide Prevention

Study Reveals Phoenix is the World's Best City for the Skin

After measuring nine different factors that impact skin health in 80 cities around the world, Chemberry names Phoenix, Arizona, as the world's best city for the skin.

UV Exposure from Indoor Sources Can Be Damaging Skin

Many of my patients are shocked to learn that we also get UV exposure through the windows in our homes and cars. And are we experiencing damage from blue light from our screens?