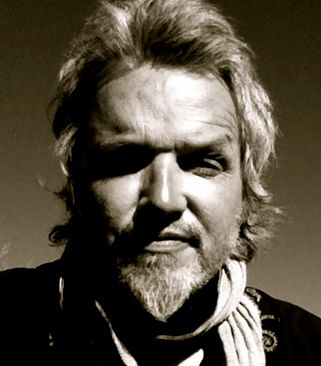 Industry Icon: There are more but I would definitely say Christiaan and Robert Lobeta.

Career Other than Hairdressing: Music. I play guitar and piano.

Now reading: I go online a lot to explore and read. I am really interested in the zeitgeist, in what people are thinking.

Day Off Pursuits: There are no off days when you are always paying attention.

Title of your autobiography: Now that I’ve made it past 40, it would be "Enough".

Before I hit 40, it would have been called "More".

Michael Baker, Creative Director at Neil TSP, co-director for Serious Business education event, editorial stylist and founder of the 2nd Hand Scissor Project, like a rock star, got into beauty for the girls.

“I was really into girls and when I saw so many of them in beauty school, well, I thought it would be a whole lot of fun to hang out with girls all day. After school, I went to work with one of the coolest salons in Witchita, Kansas with people who knew the difference between great and good so striving to be great always continued in my career.”

One of Baker’s good Kansas friends was a then-unknown makeup artist named Sonja Kashuk. (Today, her namesake line of cosmetics is sold in Target stores around the world.) “Sonja had just moved to New York and she was working with this hairdresser named Christiaan. I told her I would love to be able to watch him work and, one day, Sonya calls and this guy gets on the phone and says, ‘Yo, Baker, write some thoughts, send me some pictures and we’ll see what we can do.”

I spent two and a half weeks writing a letter, took two dozen Polaroids but couldn’t find the right picture to send him. I was in the salon and there was this great image of a model walking down a cobblestone street and there was a quote on it that said, roughly, ‘If man wants to do great work, he has to have ambition for beautiful things and disgust for ugly things.’ So I wrote that down along with a note to Christiaan that said, ‘Christiaan, the universe says I’m supposed to be there, I promise you won’t have to hold my hand, give me a shot.’ Three days before the show, I get a call, ‘Yo, Baker, get your ass to New York.’ And three days later, I’m there and we’re doing Calvin Klein, Donna Karan and I’m holding sweaty bobby pins in my hands. That started my whole career.”

In the early 90’s, with the explosion of music video channels, Los Angeles became the place to be. “I moved to LA and I moved next door to this camera man who worked for the director Julian Temple and within two days I was doing a Tom Petty video.” He would go on to work with celebrities Janet Jackson, Stevie Nicks, Bridget Fonda, Jennifer Beals and more.

“The problem with living in LA and being a hairdresser and you’re running with Billy Idol, you start thinking you can live like that.” Saying he was “lucky to get out because many didn’t” Baker went to Miami. “During the 90’s, I had been hopping down there to do some freelance work because it was fun and easy. One day I am riding my bike and I see my old friend Van Counsel and his wife Suzie.” Again, being where the action is led Baker to his next stint, five years at Van Michael Salon in Atlanta, Georgia.

Today, along with his wife Debra Neil Baker, he keeps salons and beauty businesses connected to the hairdresser through Neil TSP, an Aveda distributorship and salon business support company. Baker acts as a liason to the hairdresser. One of his teaching tools he calls the 5x5 station, the size of the average stylists’ station. “It’s your stage and when you step in that five foot radius, you are performing for your customer. Have a script, know what you want to say and do, be prepared and you will have better results in the end.”

“I have given away 65 scissors to young hairdressers and they are so grateful. They send me these really moving messages on Facebook.”

Baker’s next act may include the reveal of a new cutting tool he has invented. Stay tuned!

From Sanitation to Social Media, Andis Advises These Strategies for Navigating COVID-19 Crisis

Andis offers talking points for shops that are open as well as shops that are closed, plus social media best practices and sanitation tips. Thanks, Andis.