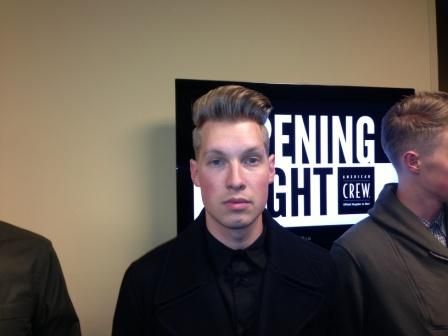 THE EVENT: On November 3, 2013 in Denver, CO, American Crew gathered together their All-Star educators, Team Crew members, employees, distribution partners, All-Star challenge contestants and hundreds of stylists to share in the excitement of their new collection debut, runway show and announcement of their All-Star Challenge winners.

THE CHALLENGE WINNERS: In a styling competition where challengers are asked to interpret the “American Crew Man” Bradford Davison of Blind Barber in Los Angeles captured top honors, including a $5,000 prize, Patrick Chai of Michael John Salon in West Los Angeles and last year’s U.S. winner and Hannah Schnobrich of Gent Cuts and Grooming in St. Paul, MN, were named first and second runners up, respectively, and took home $2,000 each.

The 2014 COLLECTION and RUNWAY: Team Crew, the accomplished stylists who represent the brand to the salon world, presented the worldwide debut of “The Independent,” the company’s 2014 Collection. Taking inspiration from different decades and creating inspiring shapes structured with American Crew styling products, the new collection will soon debut worldwide.

“Each of the three haircuts from the collection features three distinctly different finishes, proving that a masterful haircut can have multiple personalities in the cleverest of ways,” said Craig Hanson, American Crew’s creative director.

In addition, the team of American Crew artists created a runway show to inspire the audience with three looks:

Riviera: Focuses on classics yet keeps it fresh and interesting with slicked back hair that shuns volume.

Ground Crew: Pays homage to the men loading luggage and marshaling airplanes. This guy keeps it simple and straightforward.

Crewathon: Features the visor with classic barbering skills flaunted in the high taper with scalp exposure and a visor front.

CREW GLOBAL: Davison and Rozenberg will receive an all-expenses-paid trip to Lisbon, Portugal, to represent the United States and Canada, respectively. They will compete against the All-Star Challenge winners from 15 countries for the ultimate prize—the title of American Crew All-Star Challenge Grand Champion—during a photo shoot with internationally renowned photographer David Roemer.

FINAL WORD: Martin Flaherty, senior vice president of business development for Colomer Beauty Brands, said of Opening Night’s energy and the gathering of American Crew stakeholders: “What a great privilege it was to host all of them in the same room for the first time ever. The common vision and inspiration for 2014 that we now share will give us a jump-start on the new year!”

Why Every Hairdresser Should Keep These Barbering Tools In Their Kits

Why should every stylist keep what are considered "barber tools" in their kits? These four barber/stylists tell you why.

The company is expeditiously moving forward to manufacture more than 20,000 units of an 80% alcohol spray formula, which will be donated to high-need groups who are facing shortages, such as Southern California first responders, Los Angeles police officers, and low-income families with young children.

Through Beauty Changes Lives, CND and the Horst Rechelbacher Foundation redirect scholarship funds into relief grants for service providers impacted by COVID-19, and are rallying other companies to follow their lead.

The All-Star Challenge encourages barbers and hair stylists from across the globe to showcase their top-tier technique and skill by creating original looks.

R+Co launched a custom home-delivery program for salons and their clients to to support their favorite salons and provide clients with convenient ways to get their favorite products. Each R+Co salon was provided a unique link to to share with each product sale earning a 40% commission.

Learn more about Eva Scrivo, owner of the Eva Scrivo Salon and Academy in NYC. Scrivo is known for not just her signature balayage technique, but for creating beauty wherever she goes.

As Congress works to develop a Coronavirus economic stimulus package, the Professional Beauty Association works to get the 45B FICA Tip Tax Credit included. Find out how you can help!

These steps will lead you from fear into action. Stylists and salon owners will find usable information that will help steer them through these troubled waters.

In response to the coronavirus pandemic, Genbook wants to inspire the public to spread love by getting them to support their favorite service-based businesses.

MODERN SALON: Standing with the Industry In Good Times and Bad

A message from our president during this moment in time to remind you that MODERN's got your back.