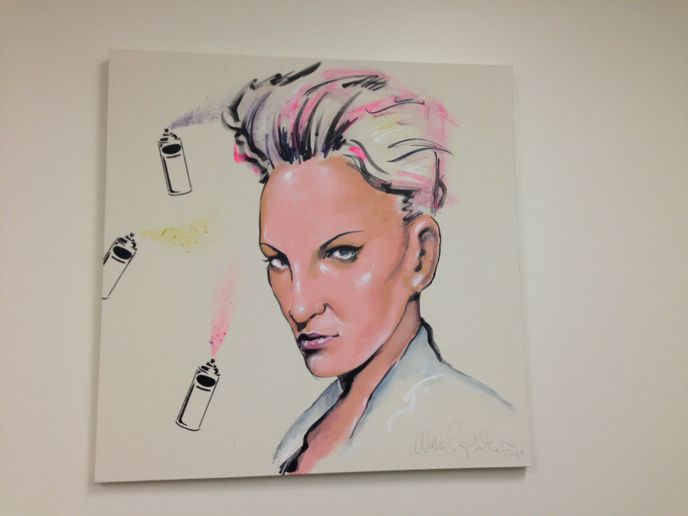 In 2013, MODERN SALON was delighted to work with the team at Pravana led by Pravana’s International Artistic Educator Alan Papaleo on a beautiful photo shoot that demonstrated the versatility of their VIVIDS haircolor line and illustrated how they can be an entry point to introducing pops of color on a client. Papaleo, in addition to being a salon owner and educator, is also an accomplished fine artist. In this video, Papaleo works off the final image that was published in MODERN SALON, recreating a paint-on-canvas version of the photograph but instead of oils or watercolors, Papaleo worked exclusively with Pravana Vivid shades. These rich pigments produced vibrant results and the finished painting hangs in the reception area of Pravana’s new headquarters.

“I’ve always said that hair is art that you can part,” says Papaleo. “The technique using the Vivids was a lot like I would do with hair. I wanted to show creativity with color. “

Follow This Beauty Hero Giving Hope to the Hopeless

She travels the world, sharing her story, offering training, guidance, and a love for the transforming power of beauty.

Get To Know: Joanne Sorbello

This Artistic Director's Advice for Stylists Just Starting Out

And more with Cassie Siskovic, the National Artistic Director of AlfaParf Milano, including her first tattoo and guilty pleasure!

12 Things to Know About the Eco Chic Style of @jayne_edosalon

Jayne Matthews walks the walk, designing her own life to meet her hair esthetic.

Here's the Best Way to Care for Your Clippers

Plus a suggestion for saving something you'll find in most new clipper boxes...and most people just throw it away.  Not this pro, though...

MAKEOVER: From Blonde To Pink (Consultation Is Key)

This guest initially came in wanting a consultation as she was interested in pastel hair, but unsure of exactly what she wanted. After a deep conversation, both client and colorist agreed on a gorgeous pink.

Julie Kandalec is the real deal in the nail world. She has done just about everything as a celebrity manicurist including fashion week, editorial and advertising campaigns and red carpet. Here she gives her top tips on working with celebrities as well as some of her favorite (and not so favorite) moments in her 20 year journey.