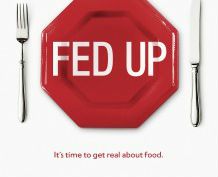 A new documentary set for a May 9 release aims to shake Americans out of their sugar rush. Fed Up, narrated by Katie Couric and directed by Stephanie Soechtig, targets sugar as the cause of many common health problems and the prime reason the film says today’s children are expected to live shorter lives than their parents did.

In an interview that NYC doctor and author Frank Lipman conducted with Fed Up producer Laurie David, the Oscar-winner who also produced An Inconvenient Truth, David cited research revealing that sugar is more addictive than alcohol and tobacco.

“Sugar alters the brain chemistry to produce cravings,” David told Lipman. “We’re not talking about the two teaspoons you put in your coffee. We’re talking about the loads of sugar that’s added to all the foods we are eating every day. Of the 600,000 items sold in the supermarket, 80 percent have added sugar.”

David urges everyone to go back to cooking food from fresh ingredients. Ask your school to get rid of the vending machines and plant a school garden instead.

“Our hope is that Fed Up can be a catalyst for honest discussion and action,” David said in the interview. “We can’t just change one thing, however; we have to change a lot of things.”

Click here to read the Grocery Manufacturers Association’s response to the movie.

The producer has launched a nationwide challenge to give up sugar for 10 days. If you sign up for this challenge at FedUpMovie.com and follow the initiative on social media at #FedUpChallenge, you will receive 10 days of tips to keep you motivated.