In 1989, hairdressers in the U.S. and Canada were artistic, passionate professionals doing incredible creative and technical work. However, this work was largely unrecognized by both consumers and peers. The beauty industry was missing the right platform to showcase its most talented individuals. 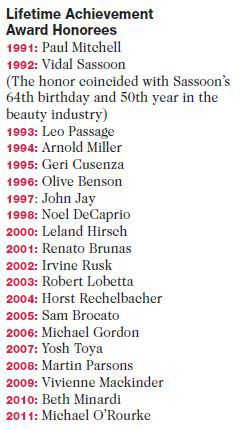 MODERN SALON and Redken recognized this need to celebrate creative excellence in hair design, and through the joint vision of MODERN’s then publisher Mike Ross and Redken’s Paula Kent Meehan, the North American Hairstyling Awards were born.

“The original idea was two-fold: to recognize the best in hairdressing and to generate the interest at the consumer level as part of an all-industry effort to elevate the image of the hairdresser in the mind of the public,” says Mary Atherton, senior VP of communications at Wella North America and former MODERN SALON editor-in-chief.

“There were very few hairdressers who were generally known and respected, and so it was difficult to take routine business-building actions like raise prices or expose clients to new services,” she says.

Inspired by The British Hairstyling Awards, MODERN and Redken cosponsored the first event during the Midwest Beauty Show (now America’s Beauty Show) in March 1989, and the tradition of celebrating the hairdresser at NAHA began.

The First NAHA
The first NAHAs were awarded in six categories, with finalists judged and selected by the MODERN staff.

“Initially for the prelims, we distributed full sets of duplicated slides to the judges,” Atherton says. “We would carousel the slides and look at them projected on a screen in small groups.”

After MODERN editors chose finalists, an independent panel of prestigious judges would determine the winners in each category. They based their decisions on originality, creativity, style, fashion appeal and technical execution.

This portion of the judging was “an event in itself,” Atherton says. “Judging was extremely hard. Photoshop was in its infancy, and top-notch hair fashion photography was not available everywhere in the country as it is now. Many entries had technical problems that had nothing to do with the hair. We looked at hundreds and hundreds of slides. But in the end, what’s great always stands out.”

Winning stylists were flown to Chicago courtesy of Redken for the awards presentation. Redken’s Ann Mincey, one of the creators of NAHA, said at the time, “Our intention was to make this an industry-wide event, and I think our diverse and talented pool of applicants and prestigious group of guest presenters demonstrated that our efforts were successful.”

Net proceeds and entry fees from the contest—$50 per submission for stylists and $25 for students as well as a $2,000 contribution from Redken—were donated to the American Foundation for AIDS Research (Am-FAR). Nearly $10,000 was donated the first year.

The Early Years
With a successful first year under their belts, MODERN and Redken continued to nurture NAHA and set it up for growth and notoriety.

Redken hired Suzanne Munshower as a public relations manager in 1989 with the understanding that half her job would be to take over producing NAHA, which was going into its second year.

“My task was to make it big and famous,” Munshower says. “It was great fun, but also a challenge. The hardest part was getting stylists to enter,” she adds. “Photographic competitions in the U.S. were so new then.”

The fun part then was—and still is—the event itself. Munshower and the rest of the Redken and MODERN teams made the decision to turn the NAHA ceremony into the beauty industry’s Oscars.

“The great thing was the response from the industry’s famous hairdressers to support us and take part,” says Munshower. “There was a longing for this type of national recognition.”

Guest presenters at the first NAHA included Vidal Sassoon Academies’ Tim Hartley and Annie Humphries as well as industry icons Charlie Miller, Trevor Sorbie, Irvine Rusk and Xenon. And the event was emceed by two of the people who were instrumental in creating NAHA—MODERN SALON then-Executive Editor Jackie Summers and Redken’s Ann Mincey.

“I was terrified—I hated public speaking—and I was so glad when it was over,” Summers says. “It’s so nice now to relax in the audience while skilled professionals handle the stage work! I didn’t really imagine it would be the prestigious competition it is today. But I’m really pleased and proud it is, and that I can say I’m one of the original ‘NAHA Mamas.’”

The parade of beauty legends presenting at NAHA continued through the early ’90s with big names like Anthony Mascolo, Yosh Toya, Sam Brocato, Michael Gordon, Beth Minardi, Dwight Miller and many more. Few people turned NAHA down when asked to be presenters.

After the first two years of the event, new sponsors were introduced in 1991, which began a long tradition of many industry sponsors. BBSI (Beauty and Barber Supply Institute), Belvedere, Clairol, JPMS, Styling Research Company and Trevor Sorbie International joined MODERN SALON and Redken as sponsors in this pivotal year.

The Evolution
Through the decades, judging, categories, sponsorship, and the NAHA ceremony itself evolved with the trends and technology of the times.

The actual location of NAHA also changed regularly for many years. After spending the first three years in Chicago at the Midwest Show (now ABS), NAHA was held in January or February through much of the 1990s in California during the Winter Buyer’s Conference. In 1998 it was held in August in Las Vegas during the BBSI, and then skipped 1999 to move to Los Angeles in February 2000 during International Cosmetology Exposition (ICE), where it stayed for two years.

In 2002 and 2003, NAHA found its home at The Salon Association’s annual Symposium in January before finally landing at Cosmoprof/PBA’s Beauty Week in 2004, where it is still held in Las Vegas every July.

Early on, NAHA organizers recognized the need to use the ceremony to celebrate the industry’s creativity and provide inspiration.

In 1994, the tradition of opening NAHA with an artistic presentation began with Team NAHA wowing the crowd. The tradition continued through the ’90s with notable artists like Xenon, Eric Fisher, Luis Alvarez, Ginger Boyle, Christopher and Sonya Dove, Vivienne Mackinder, Jeanne Braa and many more participating. Eventually, the artists who participated in the artistic presentations were representative of that year’s NAHA sponsors.

In 2000, another new element was added to NAHA—notable salon industry hosts. Steven Brooks, owner of Diva Studio in Las Vegas, and Mary Brunetti, former Hairstylist of the Year, hosted the program and a Team NAHA performed and represented sponsors.

When NAHA debuted in Las Vegas with Cosmoprof in 2004, it unveiled a new format and a celebrity emcee—Carson Kressley of the TV show Queer Eye for the Straight Guy. Kressley was such a hit, NAHA organizers decided to continue to invite celebrity hosts through the years, including Saturday Night Live alumnae Rachel Dratch and Victoria Jackson.

NAHA 19 (2008) was another notable year as it celebrated women in the industry and featured motivational segments and video messages presented by Vivienne Mackinder and a presentation by 2006 Master Stylist Veronica Bessey.

The evolution continued in 2009 when the PBA Beautiful Humanitarian Award was introduced. Access Hollywood host Nancy O’Dell was the first recipient of the award and emceed NAHA. The award was established to further promote the idea that beauty is not just skin deep and is bestowed on public figures who represent the essence of beauty in society and also have a long-standing involvement and commitment to multiple charitable organizations. Other recipients include actress Holly Robinson Peete (2010), actress Holly Madison (2011), E! host Giuliana Rancic (2012) and actor Mario Lopez (2013).

NAHA’s Lifetime Achievement Award and Hall of Leaders
Introduced in 1991, the late Paul Mitchell was the first Lifetime Achievement Award honoree. The award is granted to the individual who garners the most votes among U.S. and Canadian stylists. MODERN asked stylists across North America to cast their votes for the person they believed had touched them most profoundly, and the vote was nearly unanimous for Paul Mitchell. His son, Angus Mitchell, accepted on his behalf.

The Lifetime Achievement Award evolved into NAHA’s top honor. It recognizes outstanding contributions to the hair and beauty industry and is limited to licensed salon professionals.

At the ceremony in 1995, Meehan said, “I love the beauty industry, but I feel a little guilty accepting this award. All of you have made my life.” 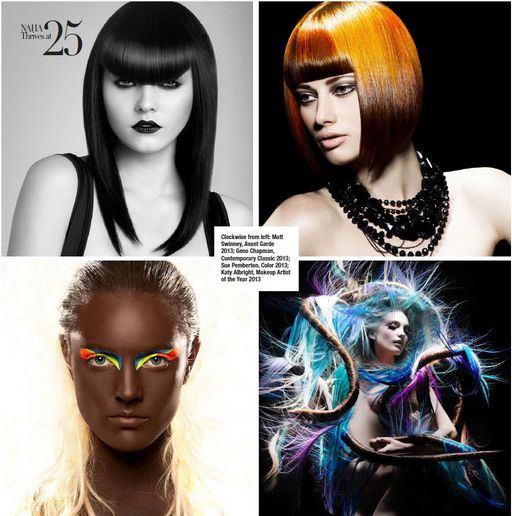 NAHA Categories: A Timeline
Once upon a time, MODERN SALON editors filled up carousels of slides and spent hours viewing the projected images, carefully narrowing them to a smaller set for the next round of judging.

Time and technology have changed this process considerably. Now, a first round of judging is conducted by a peer group of top talent. Next, editors from consumer and industry publications view work online and vote for winners. Only the Master Stylist category does not go through the first round of judging.

The categories themselves have changed even more drastically. Each year, categories have been added, deleted and tweaked to fit the times with one mainstay—Hairstylist of the Year.

“I always considered North American Hairstylist of the Year the award to aspire to—it meant showing allaround brilliance,” Munshower says. “But all the awards were so important, and I can still remember some of the dazzling color submissions and the ground-breaking men’s and multicultural work. NAHA was setting trends from the start.”

Most Notable Category Changes
1990: Categories were streamlined to four: Makeover, Classic, Avant Garde and North American Hairstylist of the Year

1993: An eighth category, North American Student Hairstylist of the Year, is added. The first Trustee’s Award, which honored a professional who teaches, mentors and sets and outstanding example for hair stylists was given to Jeanne Braa of JPMS.

1994: Two categories are added—Nail Makeovers and Permanent Waving—for a total of 10 categories.

2002: Salon Team of the Year award is introduced and goes to Pure salon in Montreal. Upon winning, co-owner Anna Pacitto said, “40 people worked to make this one happen, and it’s for all of them.” 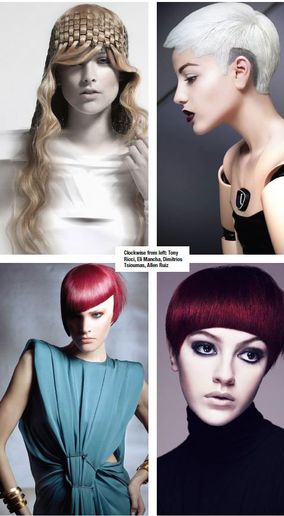 2007: The Fashion Forward (fresh, innovative imagery in a total look format) category debuts, Long Hairdressing is dropped and the Salon Design award is introduced. This award celebrates great design and ambiance in the salon or cosmetology school.

NAHA 2014
NAHA is part of Beauty Week, July 12-15, 2014, and is produced by the Professional Beauty Association (PBA) and hosted by Cosmoprof North America. Events during the week include NAHA, Beacon and City of Hope dinner.

The 2014 ceremony will feature artistic presentations by Allen Ruiz (2013 Hairstylist of the Year), Redken, Aveda and JCP salons. Giuliana and Bill Rancic, stars of Giuliana and Bill on E!, will host the awards, which will take place July 13, 2014, at the Mandalay Bay Resort & Casino. The redcarpet reception is 6:30-8 p.m., and the awards ceremony is 8-10:30 p.m. with a special after-party following the ceremony.

“It was always envisioned as the big one,” Atherton says. “When Mary Brunetti won in 1991, every one of us behind the scenes was in tears. It was absolutely thrilling, and we knew it was so right to award a hairdresser for supreme talent and outstanding work,” she says.

In 1990, Frank Rizzieri became the second Hairstylist of the Year, an honor that catapulted his career.

“Winning Hairstylist of the year was quite an achievement and helped tremendously in my career and confidence,” Rizzieri says. “It also helped me get more involved in photo shoots and magazines.”

And 25 years later, it is still considered a big coup for stylists and has become renowned in the industry.

Allen Ruiz of Jackson Ruiz Salon in Austin, Texas, won Hairstylist of the Year in 2007 and 2013.

“To be recognized by the industry that I live and breathe feels amazing,” Ruiz says. “It makes all the hard work worth it. Just by submitting an entry to NAHA, you get to have a point-of-view in the industry—and it’s very gratifying to feel you have a voice.”