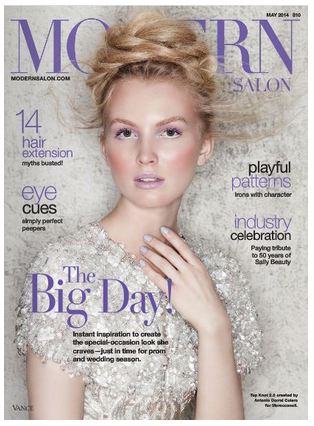 Barcelona native Antonio Corral Calero taps into many looks from his extensive repertoire, but this season he favors romantic and ethereal finishes that incorporate a varietyof styling techniques, including braiding, backcombing and extension bundling. The dapper global creative director for Moroccanoil requested a model that could carry off something whimsical and confident.

Recovering from an exhausting Fashion Week, Calero was relieved to meet model Valeria, who has a “coverface,” long neck and soft hair. “She is perfect,” he said when he met her.

Although Valeria has fine hair, Calero was not concerned. “Sometimes it is easier to work with a model who doesn’t have a lot of hair,” he says. “I like to build with products, styling techniques and extensions. It gives me the opportunity to explore more options.”

And exploring those options is just one of the reasons Calero has become the darling of editors and fashion designers around the world. He travels with suitcases filled with appliances, products, extensions and all the tools necessary to create smooth as well as heavily textured hair. He is as competent with updos as he is with beachy waves. His fashion week ponytails have a bit more oomph and style than the average, and his simple silhouettes seem to have more pizzazz than other similar finishes.

Working with him on set is a dream. He greets each member of the team and all visitors with a handshake and smile, introducing himself as if we all don’t know who he is. This is all followed by Calero grabbing the coat of a visitor to hang while offering a beverage.This is not his studio; he is just such a gentleman.It doesn’t hurt that Calero has movie-star looks—MODERN has profiled Calero for his fashion sense, impressive as he stands out in a crowd in his designer suits among a sea of black jeans and T-shirts. If this sounds like a love letter, it is. MODERN loves working with him and is thrilled that, once again, Antonio Corral Calero created a cover-worthy finish.