When we tallied up the results of the 2014 MODERN SALON Healthy Hairdresser Survey, the first industry poll of its kind, the top three concerns held no surprises:

The high percentage affected by weight and fitness reflects a universal concern, falling between the general U.S. population percentages of a little more than one-third obese and an estimated two-thirds overweight. The other two issues relate more directly to the salon profession. Hairdressers work standing up, straining the back, neck, legs and feet. You can sit on a stool to cut hair, but much of the styling you do works better when you’re standing, even though that stresses your entire body. 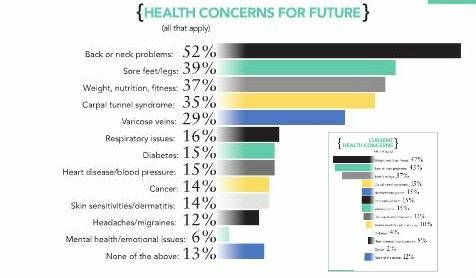 When asked how their current issues would progress as time goes on, respondents seemed most concerned about the career-related problems: 52% of respondents worried about back and neck problems while 39% fretted about sore feet or legs, while a lesser 36% worried that weight, nutrition and fitness would be a future concern.

Although no other ailment came close to those three in percentage of currently affected respondents, the survey revealed that hairdressers are more broadly worried about the future. Most notable, 15% reported a current carpal tunnel issue, but 35% expressed concern about facing a carpal tunnel problem someday. Those who already are dealing with carpal tunnel problems may be included here, worried that their problem will persist or worsen, but that still leaves 20% of respondents who fear developing a carpal tunnel problem. Similarly, while 15% reported having current problems with varicose veins, nearly twice that—29%—worried that they would face that problem in the future.