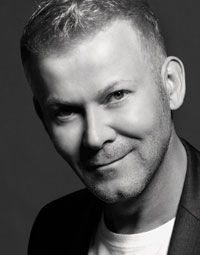 According to Carney, nothing ever stands still—especially in the world of hair—so when he was given the opportunity to align with Schwarzkopf Professional, Carney couldn’t decline.

“I’ve always been about change and moving forward. You stand still and you simply get left behind. I feel it is now time for me to change, to move forward. To grow and surround myself with stronger talent that will inspire me to be better.” says Carney, “I don’t jump ships easily or quickly; loyalty, passion, creativity and longevity are important core values to me. I like to surround my self with those who are better than I, so I can learn and absorb all the wonderful things to learn in life. With that said, I couldn’t be more thrilled to represent and partner with Schwarzkopf as Creative Director/ Ambassador for Schwarzkopf Professional North America.”

“I have always been a fan of Damien Carney,” says Schwarzkopf Professional North America General Manager George Broder. “His personal style of presenting hair combined with his sense of humor and humility makes for a memorable encounter. With Schwarzkopf Professional, we will expand on Damien’s ability to make a difference to all those that he encounters throughout North America."

Carney has worked with Ryan Gosling, Olivia Munn, Krysten Ritter and world-class supermodels Magdalena Frackowiak, Abbey Lee and Liberty Ross. He has collaborated with notable photography greats Gilles Bensimon, Ellen von Unwerth, Norman Watson, Rankin and David Slijper, Carney’s work has been featured in renown international publications including ELLE, Vogue, Harper’s Bazaar, Marie Claire, W, Cosmopolitan and GQ.No stranger to the screen, Carney has appeared as a Certified Presenter on ABC, NBC and QVC as well as a Lead Stylist on “America’s Next Top Model.” Carney has also worked exclusively with Tabitha Coffey of Bravo’s “Tabitha’s Salon Takeover,” as her stylist of choice for extensive cover and fashion shoots.

Carney served as Artistic Director and Principle Trainer for one of London’s top hairstyling academies. Carney was tapped by creative powerhouse, Trevor Sorbie, to join his legendary Covent Garden Salon. Not only did Carney enjoy mentoring with one of the industry’s most prolific artists of all time in Sorbie, he worked in the salon with industry icons Eugene Souleiman, Vivienne Mackinder, Ruth Roche and Antoinette Beenders, as all were developing their own skills. He achieved the position of “Principle of Education” and in turn received the training of a lifetime. Since 1999, Carney has wielded his scissors and unique artistic vision for Shiseido Laboratories as the “International Artistic Director” for the Joico hair care brand. in 2006, he established Damien Carney London, a mobile and very modern hairstyling academy with satellite offices in London, New York and Los Angeles. Carney’s accolades include: Judge, NAHA Awards;  Finalist, AIPP Coiffure Hairdressing Awards Paris (2009) ; Modern Salon’s “50 Influential Hairdressers - Trendsetters” (2008);  Finalist, NAHA “Contemporary Classic” Award (2007); Winner, British Hairdressing Awards “Men’s Hairdresser of the Year” (2007); International Stylist of the Year, Canadian Hairdresser (Canada); International Stylist of the Year, Black Hair & Beauty Magazine (UK).

Now Carney enters into a new era with Schwarzkopf Professional and is excited to continue to inspire artists to take their craft to the next level. Carney shares, “Schwarzkopf Professional is a brand that leads with amazing education, incredible hair care products, cutting edge technology and most importantly a strong, strong, passion for our industry via education. I can’t wait for my new journey to begin with this incredible organization.”

Visit the War Paint store and you’ll find more than makeup: A fresh trim from the mental health non-profit Lions Barber Collective, bespoke products made for your skin while you wait, an interactive virtual makeup conversation with Founder Danny Gray and much more.

Manage the Summer Salon Rush with These Time and Technology Tips

Stay ahead of your summer schedule; learn more with Square.

All 1,850 locations of Sport Clips will host National Signing Days with guaranteed interviews, and instant job offers for qualified stylist and barber candidates.

Top 10 Beauty Brands in the US Right Now

According to research by Cosmetify, ColourPop is the number one beauty brand in the US. See the other brands that made the list.

Why Are Burned-Out Employees Leaving in Droves?

A burnout epidemic is rising—and it’s fueling a mass exodus of employees. The findings of a psychiatrist and a workplace trauma expert have application to every industry. And they say the timing of these walkouts shouldn’t surprise us.

The Robot Manicure: Gimmick or GameChanger?

A San Francisco salon is the testing ground for a new manicure machine from Clockwork that paints in ten minutes. Notice we say 'paints' and not 'polishes'...

Plant Beauty in the World with Aveda this September at this always inspiring event for industry professionals.

Are Mask Guidelines Changing Again? Yes and No

Here's some of the latest discussion--and your response to it--around new virus variants and prevention measures.

The inaugural competition celebrating the diversity and beauty of all hair textures names their finalists. The 16 top hairstylists were selected from more than 350 submissions in one of the four hair texture categories: straight, wavy, curly, and coily/kinky.

Stephanie Polansky brings 27 years of industry experience, beginning as a stylist to most recently serving as Global Director of Education and Shows for Sexy Hair.

Everything You Need to Know About DevaCurl's New Look and Formulas

Fresh look, new formulas, who’s this? As clients’ needs evolve, so do products. Welcome to DevaCurl 3.0!

Olaplex, the brand that created the bond-building hair category, is launching its first-ever Olaplex Pro Artists Awards, celebrating the hair professionals who dedicate their careers to creating beautiful, healthy hair.

Fall in love with The Beachwaver Co.'s latest collection supporting the It Gets Better Project.