You have to be pretty lucky to win a car! But Hair U Wear’s Teresa Lane, who won the Mini Cooper offered in the drawing at the beauty industry’s 2014 City of Hope Spirit of Life Award Gala honoring Harlan Kirschner, already considered herself lucky before her name was pulled to win the car. 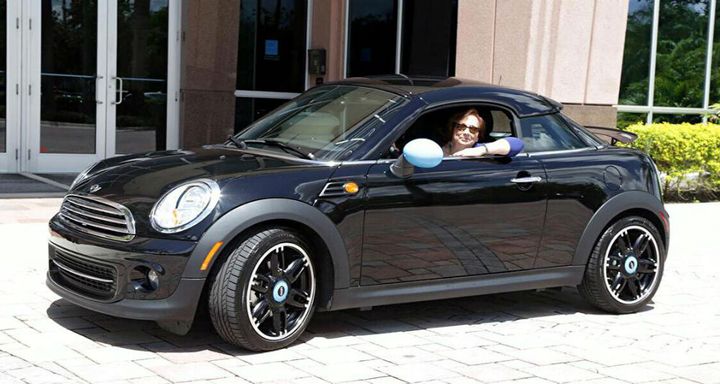 Two years earlier, Lane had been treated with surgery and radiation for non-invasive breast cancer, ductal carcinoma in situ (DCIS). A little more than a year later, she sustained fractured ribs in a near-fatal car accident. The x-rays that followed her accident revealed a suspicious spot on her thyroid, but a biopsy indicated it was most likely benign. By the past spring, Lane had symptoms prompting another biopsy that reversed that finding, and she was diagnosed with Stage II thyroid cancer. She underwent more surgery, followed by an inconclusive CAT scan to determine whether any cancer remained. Lane was still awaiting the results from a second CAT scan when she flew to Las Vegas to attend her very first Spirit of Life event. That’s when she received the news: no cancer!

Lane could finally relax and enjoy herself at the City of Hope dinner with her beauty industry colleagues. Some of them decided to purchase raffle tickets at the event.

“I never truly had it in my mind to win the car,” Lane says. “I was simply feeling grateful for all of the wonderful news I had received the previous day and for the joy of being cancer free once again! I really just wanted to give something back by making a small donation to a truly amazing cause. I never imagined that I might win a beautiful new car! Wow!”

Lane is also grateful for the support she received during both of her cancer ordeals. Radiation treatment left her exhausted and drained every day for the 33 treatments she endured.

“Regardless,” she says, “I was determined to never let cancer stop me from living. I continued to work during several weeks of radiation therapy. I was very fortunate to have the support of my employer and the proprietor of Hair U Wear, Michael Napolitano, who told me, ‘Do whatever is needed to take care of you.’ Then he provided ample time for my doctors’ appointments and treatments, and gave me an easier schedule of air travel. When I joined Hair U Wear nearly 15 years ago, it very much seemed like a family that I wanted to be part of—and I am so grateful I did!”

Lane hopes that her win indicates a bright future.

“When they called my name, I just couldn’t believe it,” she says. “It seems like ‘the universe’ was saying that this day is a brand new day, your new beginning—and with a new car!”