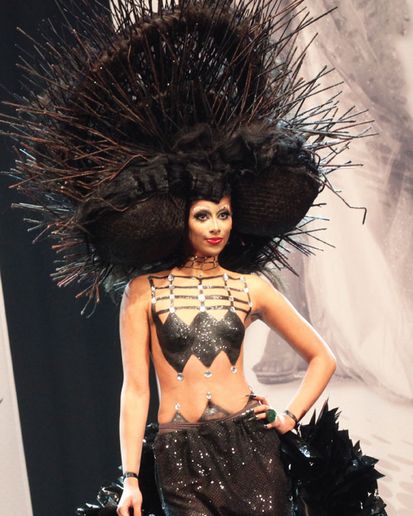 “Battle of the Strands” is the World Cup of Beauty - the world's most extreme hair, makeup and wardrobe competition. On Oct. 6, 2014 at 5 p.m. PST, 16 winning salon teams from around the globe will converge in Las Vegas at the Mandalay Bay Resort and Casino's LIGHT Nightclub to compete in all areas of beauty, using breakthrough techniques and the hottest consumer trends.

This salon showdown features extreme talents from the US, Canada, Mexico, Puerto Rico, and Japan as they compete against each other on one stage. Thousands of the industry's finest enter the competition. Hundreds qualify to compete and show off their skills, until the contestants are reduced to 16 teams that make it to the final showdown in Las Vegas.

This final “Battle” will push the boundaries of hair, makeup, nail art and fashion, as teams showcase the ultimate in creative coiffure.

Kim Vo, international stylist icon and co-host, remarks, “These contestants are true artists who will be confronting the biggest beauty challenges of their lives. The teams are magnificent and I have no doubt that the audience will be astonished when they see the magic these teams are capable of creating.”

Thanks to new partnerships, “Battle of the Strands’” grand finale will be live streamed to 400 plus movie theaters nationwide, courtesy of Fathom Events' Digital Broadcast Network. Additionally, this year's event will be filmed as the centerpiece for a four-part television series on the Discovery Fit and Health Network. The no-holds-barred “Global Beauty Masters” will offer viewers a sneak peek into what really goes on behind the salon cape and throughout the competition. It is set to air weekly on Tuesdays at 5pm EST beginning Dec. 2.

“Battle of the Strands” would not be complete without the support of top beauty brands. Presenting partners Farouk Systems Inc. - CHI, Millennium Systems International, Ultratress, Kryolan Professional Make-up and Bhumi Makeup Brushes are working in concert to ensure this “Battle of the Strands” season is the most ambitious to date and a tough act to follow.

“Battle of the Strands is going to open the door for more people to be attracted to the profession and to see that hairdressing is much more than the stereotype,” said Mr. Farouk Shami, Founder and Chairman of Farouk Systems. “It’s an art, it’s a science and it’s a business.  This platform will introduce the public to the real hairdresser.”