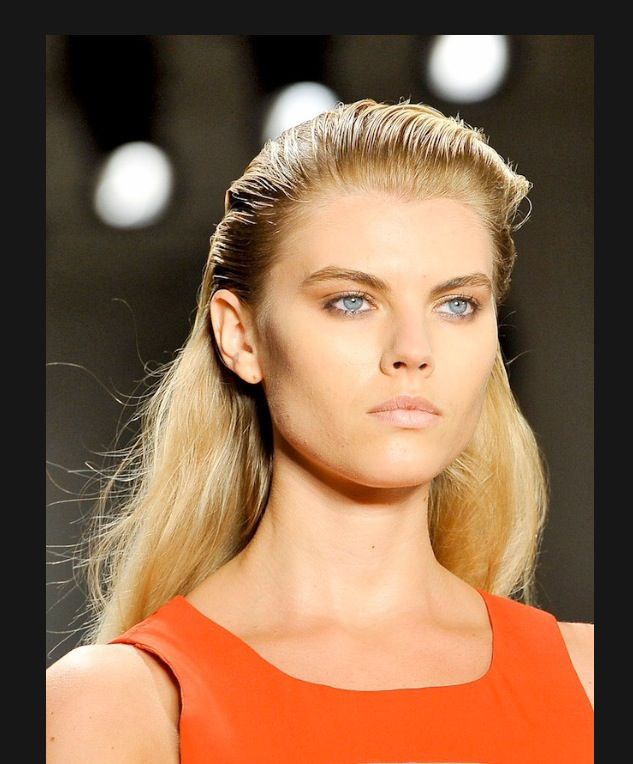 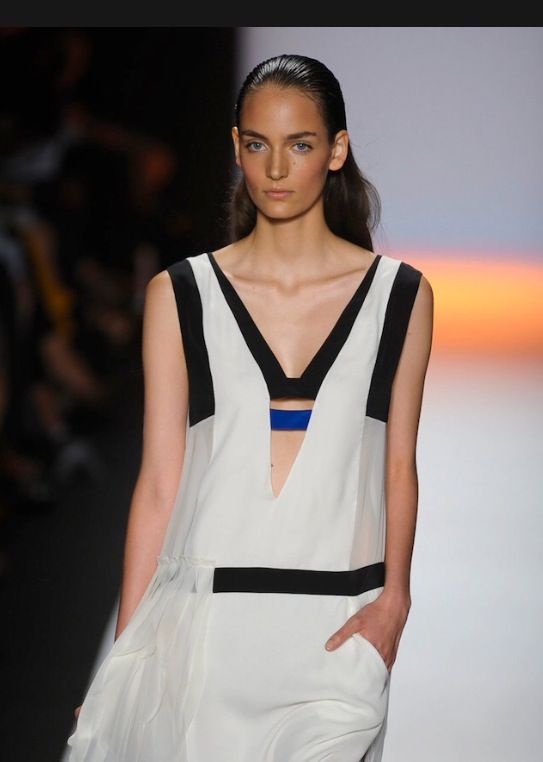 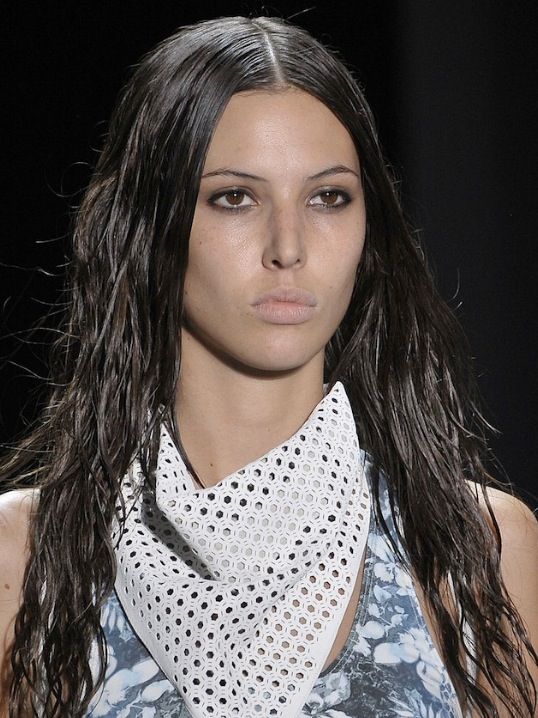 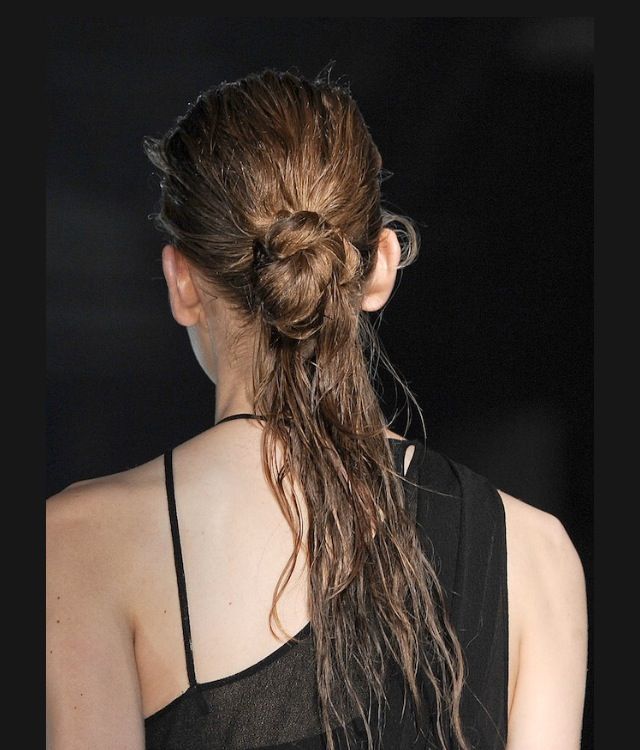 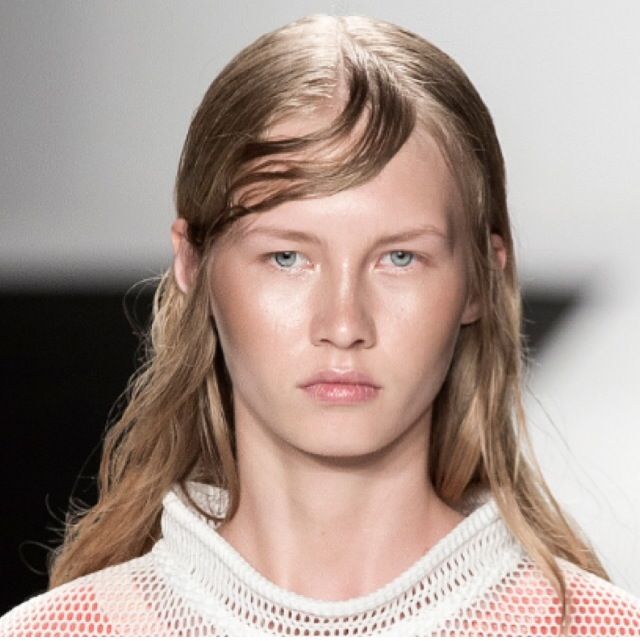 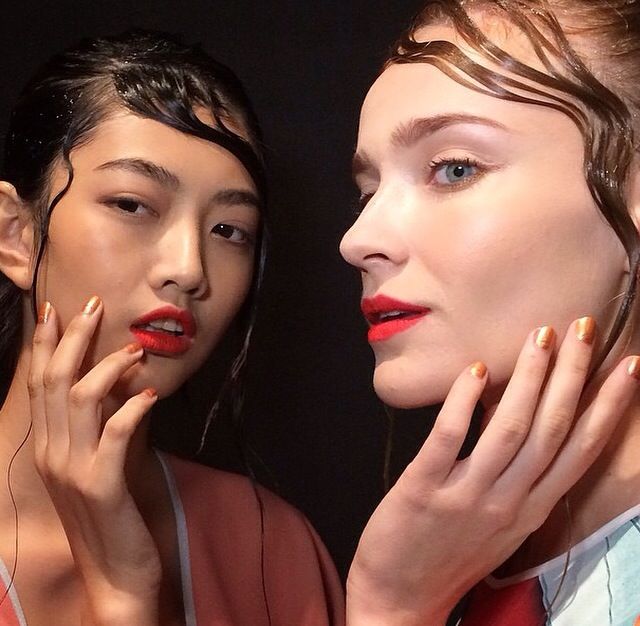 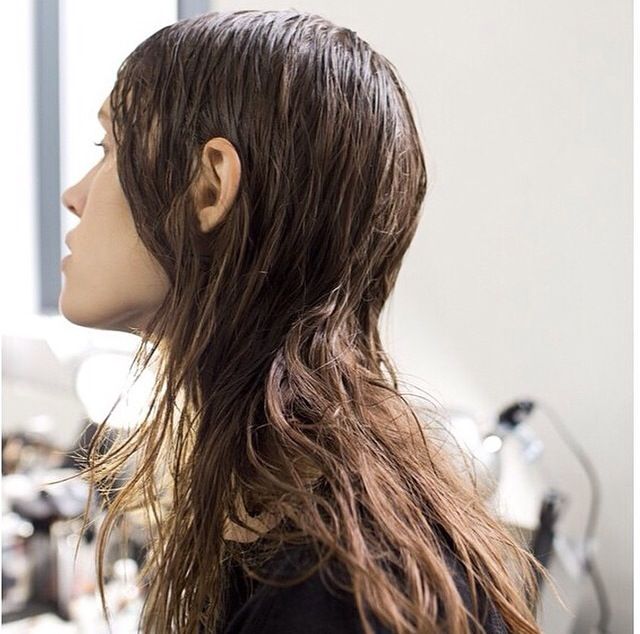 A true hair trend sometimes, only sometimes, emerges during New York Fashion Week. Perhaps it’s a defined part, occasionally power texture and always the ponytail. But, I must say, the trend this season has me baffled. It’s greasy hair! Or at least hair that looks greasy.

This “trend” deserves a bigger conversation. When I first saw it on day one I thought it was a mistake, that someone accidently spilled gel on the model. But then it kept showing up, either greasy-looking from scalp to mids, or from root to ends or sometimes just a wet-ish forehead look. It has left me scratching my head (haha). I hate to say it because I do embrace the new, but this one is causing a bit of a challenge to embrace.

One of the best parts of NYFW, for me, is getting to chat with some of the leads who I genuinely love to catch up with backstage. In the few minutes I get to spend time with each, I always ask about what is trending. Apparently, I am not the only one grossed out by the grease-ball look, as others have been asking similar questions. When I asked TIGI Global Creative Director Nick Irwin what he thought, he said “It’s all good. I love it when we try new things.” Frank Rizzieri, salon owner, school owner and founder of RSessionPro Tools, did several shows this season. “Rarely does the actual look filter to the salon,” he says. “But a version of the look does. It’s all good for the salon and the client.”

Just to give you a little background, it's not like Nick, Frank, Eugene, Odile, Guido, Orlando, etc get together a few weeks before fashion week and have a pow wow to discuss "the look". The hair finish is either directed or heavily influenced by the fashion designer. He or she collaborates with the hair lead to come up with the silhouette. Looks like this season many of them see gooey hair as hot.

The good news, assuming this look catches on, is that salons will be selling more products. First and foremost gels and sprays will be slipping off the shelves followed by a powerful clarifying shampoo to get it all out of the hair.

In our NYFW reporting MODERN posted several of the grease-ball looks. These generated lots of comments, and few "likes".  If there had been an "unlike" option, I'm sure it would have set all kinds of records. As it is, there was a truly disproportionate number of comments to likes. I get it. It's a confusing look.

Here are some of my favorite comments from the very “unliked” images. You guys are just too funny when you are expressing yourself (and not being too mean):

-Looks like my daughter when she is done playing softball.

-Was this an accident?

-It looks like it belongs to a dirty old man.

-Ew. It’s like a sweaty old guy with a comb over.

-LOL @modernsalon you keep coming back for more abuse.

-I guess I can show up for our breakfast meeting without shampooing my hair after my run. I’ll just tell my boss it’s runway hair.

-This will never fly in TX! Not big enough.

-Haha this is called the south humidity look. Or hot flashing…lol

-From @hairbypea: “This takes texture creating products and hobo chick to a whole other level. Definitely avant-garde…but not very wearable. I’m not sure that runway fashion or avant-garde hairstyles need to be wearable. It’s high fashion! Not everybody will understand it. I’m still trying to wrap my mind around this runway trend. Staying open minded.

-From @kimberaz25:  Not a fan at all…I LOVE dressed hair, but…fashion is eclectic. I appreciate the vision of each individual.

-From @jeni_does_ham: It’s art. I may not like the way it “looks” per se – but I love the creativity of it and the uniqueness of it.

Thanks all for weighing in. We DO read your comments and appreciate your reactions to any of our posts. However, keep the positive ones coming. Those are the best!