When a well-established stylist moves to a well-regarded salon, there are many considerations: will clients come to the new location? Will he/she mix well with the other hairdressers? Will her/his assistants transition smoothly?  On the other end, a salon owner welcoming a new stylist has their own questions and concerns: How will my existing team respond to this new stylist on the floor? Will this stylist respect our salon culture? How much hand-holding will they require?

All these questions cropped up when Kim Vo, salon owner and celebrity colorist, welcomed in-demand stylist Mohammed Rahebi to his salon at the Beverly Hills Montage Hotel.   It was a risk for both but one that is proving to be a win-win.  Rahibi’s long-time client and friend, the marketing and branding maven, Joni Rae RusselL, proposed this as a story worth telling and we agreed. We asked both Vo and Rahebi to share how they approached this successful transition and assimilation. 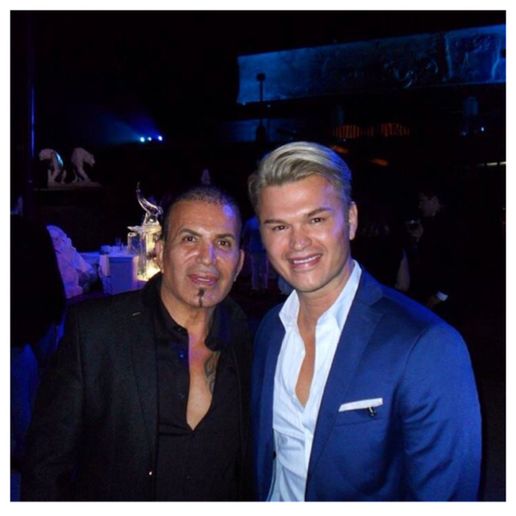 A sought-after hairdresser who travels to Rome, Russia, Istanbul, Tehran, and Dubai to work with clients willing to pay top dollar for his expert touch, Mohammed Rahebi was at the top of his game when he started to feel that something was missing.

“I was in my salon in Encino for 21 years. I was tired, I was not growing and I was stuck in one place,” said Rahebi.   “I knew it was a big move but I wanted to be working next to an artist, with someone who knows more than me and if I didn’t do it, I was going to be the same as everyone else—just making my money and going home.”

Rahebi targeted Beverly Hills as his next location. He visited several salons to get a feel for them—their staff, owners and clients.  When he visited the Kim Vo salon at the Montage Hotel in Beverly Hills, he knew immediately it was the place for him. “When I first met Kim a year ago, I told him, I love the way you work and I would love to work next to you,” said Rahebi.  “He is also a colorist, we are both Leos and we both like to grow—we don’t want to stand in one place. When I came in for an interview, the way he talked to me—like a colleague, not an employer—made me feel so good.”   And he was delighted when Vo offered him a place at his salon.

Rahebi sent out an announcement to his 10,000 Facebook friends sharing the news that he was headed to Beverly Hills. His clients said that wherever he would go, they would follow.  He also took out a radio commercial.  Kim Vo’s salon started booking for him two weeks prior to his arrival so he had a full book when he walked in the door.

“They are very happy.  And I asked them if they want to go back and they said never.”

“After 8 hours, I still want to work,  I don’t want to go home.  I love the atmosphere.  Kim is such a nice guy. He was the first to greet me, the first to ask if I needed help. The other stylists are nice.  And I am busy.”

With salons in Laguna Beach, Beverly Hills and Las Vegas, Kim Vo understand the importance of developing a cohesive team.

“Many are called but few are chosen,” laughs Vo.  “In hiring at all of our salons, I like to meet everyone individually.  We have so many people, at many different levels doing many different things but they all play together like a symphony and all serve a distinct purpose.  This means I really hire, not by looking at numbers, but by disposition.  I look at someone’s energy and evaluate how they will fit into the company.  This is very important to me; the wrong fit causes so much fall out and a real disturbance in the force.

“In the old days, they used to have horse whisperers who were responsible for matching teams of horses to pull carriages and they had to match the same energy and skill levels for everything to move in the right direction.   I feel like I look for that innate talent and skill but there is also an intangible quality that has to be there, I have to have the feeling that this person will fit in. If you’re more in doubt, throw it out.  Trust your instinct.”

“Mohammed was already well established and he was looking for a place that was up to his standards. He also wanted to make not just a lateral move but a move upwards.  I have a very honest talk during interviews.  I don’t sell them anything, I share with them.   I share my concerns, I am honest about where they could improve and I stress the importance of fitting into the team. I don’t sugar coat it.  And hairdressers are great because they’ll generally be very open to this and very honest in return.”

“With assistants, you hope the stylist has trained them a certain way.   I call new hires a liquid commodity because it is ever changing and ever evolving. You just have to trust that the stylist will do the right thing.“

“We’re not into making a station ‘your own’ but instead of saying, ‘No, you can’t do that’ I explain how part of our story is our cleanliness, our order, our symmetry. I want them to feel ownership and understand why it’s important to our professional philosophy.”

“What I love about Mohammed is that he is a worker, like me. His work ethic is incredible. And he not only works hard but he is always smiling.”