The 2015 Golden Globes were all about powerful and glamorous women, and nobody embodied the look more than House of Cards star Robin Wright.

“Her two piece Ralph Lauren gown set the tone for her modern, sleek hair,” revealed Joico Celebrity Stylist Paul Norton, who coiffed the star for the awards for the second year in a row.  “So we went for a look that combined glamour with an edgy, punk influence.”

STEP 2: Next, Norton decided a fresh haircut was needed. He closely cut the side and back sections with lots of point cutting throughout the longer top section to encourage dramatic texture and movement.

STEP 3: Once the hair was cut, Norton applied Joico Heat Set to damp hair and directed all strands forward as he dried them with a small Mason Pearson brush.

STEP 4: Then he applied new Joico Hair Shake, which, he declares, is the most exciting product to come around in some time.  “It’s a liquid that turns into a powder and allows me to create cool, punk rock texture,” said Norton. He misted about seven pumps of the Hair Shake over the surface of Robin’s hair and used his fingers to form piece-y texture throughout the lengths, keeping the fringe directed forward and slightly off to the side. 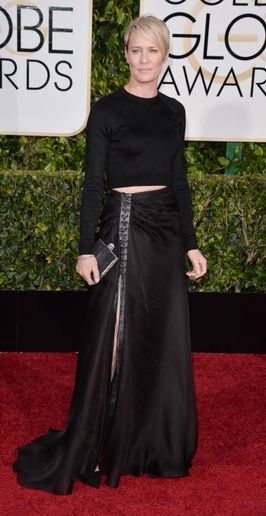 “Robin felt the result was sexy, alluring and edgy,” says Paul, “which is exactly what we were after!”

Stylist, educator, and Sam Villa Ambassador Twylla Jane shows us how to create one of the trendiest looks for this back-to-school season: 90s space buns!

Build It and They Will Come: Lilly Benitez, Founder of Blade Craft Barber Academy

It's time to shatter the male grooming ceiling. Men want to have good skin, great hair, and nice nails, too. And they're looking to their salon professional and barber to help a guy out.

People are looking forward to visiting your salon. They are anticipating the “Me time” and tabling their to-do lists. To greatly enhance the all-too-important client salon experience is to do it with subtle touches in your space.

Curl Confidential: Products with the Secret Sauce for the Curly Client

It’s no secret that natural texture –and haircuts that call it out—are in. Everywhere you look this season, your eyes will land on unfussy and almost undone hair. And when it comes to enhancing and defining natural curls, stylists know that product is their friend. Meet the latest and greatest products for the promotion of curls and waves.

How To Conceal Thinning Hair and Tame Unmanageable Regrowth

Hairtalk’s full suite of extension methods and topper solutions can help your clients battling excessive hair shedding and unmanageable regrowth. From clip-ins, tape-ins and sew-ins, to thermal fusion, temporary and semi-permanent toppers, discover what Hairtalk has to offer for clients struggling with hair thinning.

Celebrity Stylist Cesar DeLeon Ramirez tells us all about one of his favorite products: Toppik Hair Filler.

Back-to-School Success in the Salon: Two Great Haircuts, Trending for All

Find out what back-to-school haircuts are trending this year. The Empowered Evolution by Great Clips collection features bold, customizable haircuts that enable you to deliver a whole new generation of particular style interests and preferences.

10 Ways Sweating Daily is Good for Your Hair and Skin

While sweating can be irritating and unpleasant, it's a natural process for your body. Wellness blogger K'ayla Zella outlines 10 reasons sweating is beneficial.