Everyone felt like royalty when Sally Beauty and CosmoProf Beauty invited over 200 guests to attend an exclusive premier of Disney's new film, Cinderella in Dallas, TX on March 12, 2013.  Among those in attendance were winners of a store endcap design contest, as well as executives from nail care and color brands Morgan Taylor and Gelish. The brands have created their newest collections inspired by and in collaboration with the film.

The store endcap contest winners were from a CosmoProf in Arlington Hts, IL. They were flown to Texas and given the royal treatment which included stretch limos  to elegant dinners and to a tour of the Sally Corporate Headquarters. They shared a lunch with CosmoProf vice presidents featuring a cake that was a replica of their winning display. They visited a spa for manicures and pedicures and were VIP's at  the exclusive movie premiere.

MODERN SALON heard more details on the challenge and the events surrounding it from Heidi Knapik, senior category manager, US Merchandising, CosmoProf:

MS: When was the challenge issued to the stores and what were the instructions or parameters given?

HK: In January, stores were challenged to 'channel their inner princess' and decorate a store endcap in a manner befitting royalty. The endcaps were judged based on creativity, visual appeal and the display of the product (shop-ability).

MS: How many stores entered their images for your review?

HK: Over 300 CosmoProf & Armstrong McCall stores throughout North America entered this contest, which created quite a buzz among customers.

HK: The winning store team was from CosmoProf store #6668 in Arlington Hts, IL.  Their endcap was tastefully put together and was exceptional at meeting all of the requirements.  It was clean, beautiful and approachable and customers were automatically drawn to it.

MS: How do these movie-themed tie-ins do for your stores?  Do they drive traffic through the door?

HK: This is the first contest of this type that we’ve had throughout our stores in years, and it was well received by the store staff, as well as customers.  Not only did it create excitement and appeal to a wholesale-type store setting, but it was obviously engaging because this is the strongest collection that we have ever sold from both Gelish & Morgan Taylor.  This collection allowed our store teams to showcase their merchandising skills and we at CosmoProf are so proud of the participation level and the skill level of our stores.  We were relieved that we did not have to judge the winners; the actual judging was done by the marketing minds behind the Gelish & Morgan Taylor Brands, including both Morgan and Taylor!  We also had four other regional winners:

MS: Tell us about that cake!

HK: The cake  was created by CosmoProf Nail Buyer and amateur cake artist Pamala Roach. The cake was made over five days, and she hand-crafted each individual Gelish and Morgan Taylor bottle out of fondant.  The packaging for the displays  was made of edible ink on fondant, and inside was a super moist yellow cake with homemade icing, again covered in fondant.  Everyone was simply blown away by this cake, including Chris Brickman, President and CEO of Sally Beauty Holdings, Inc. 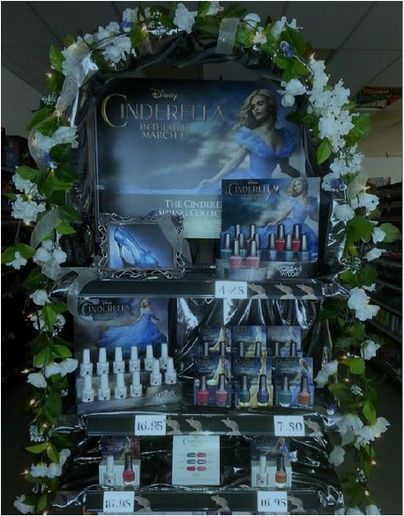