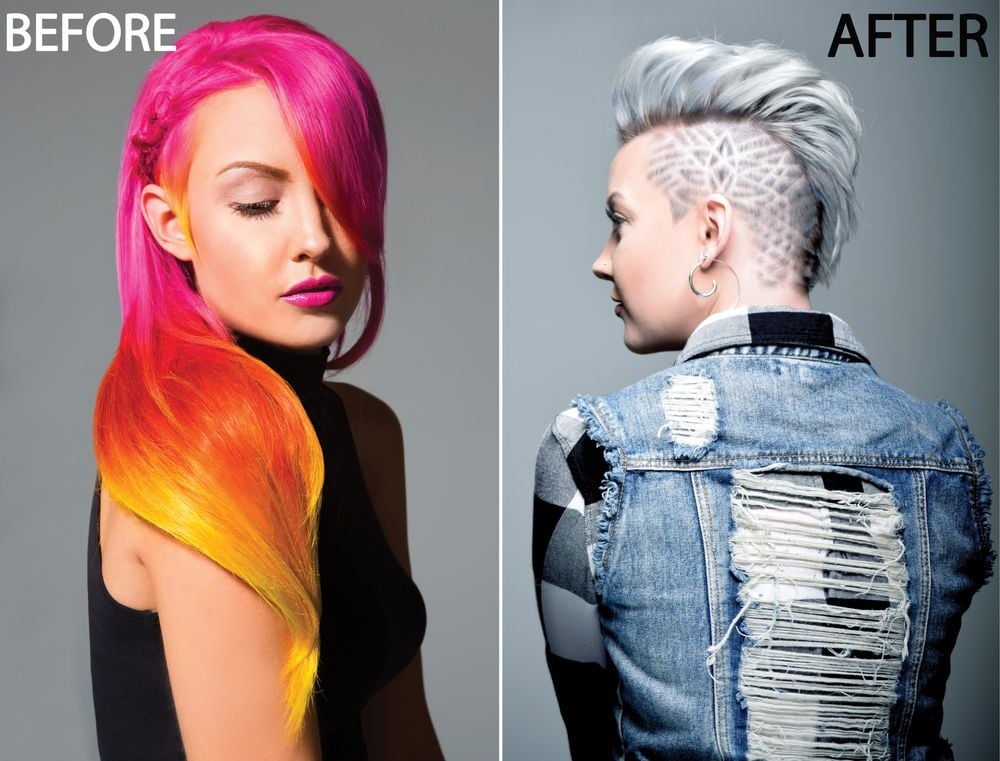 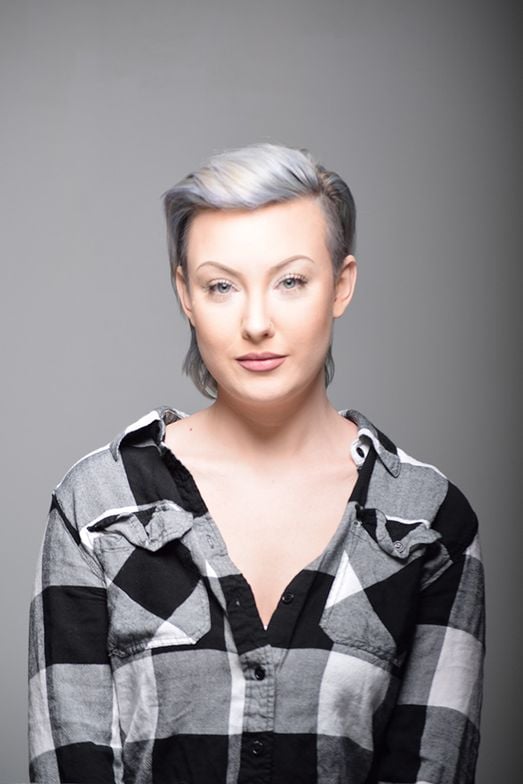 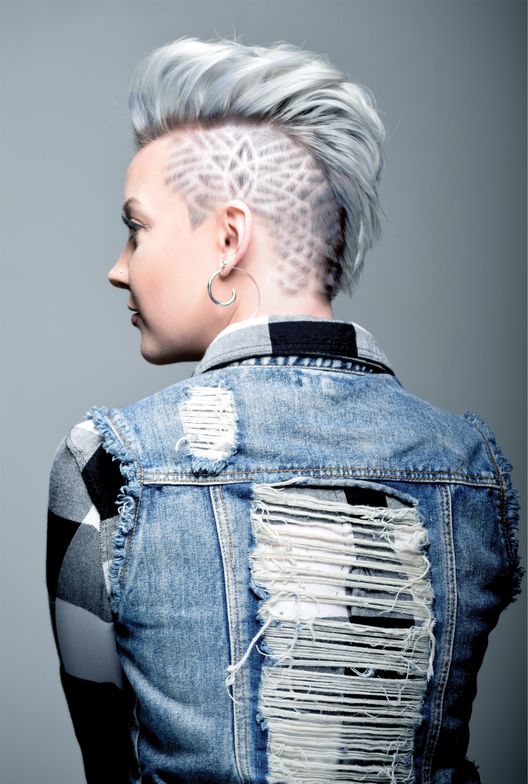 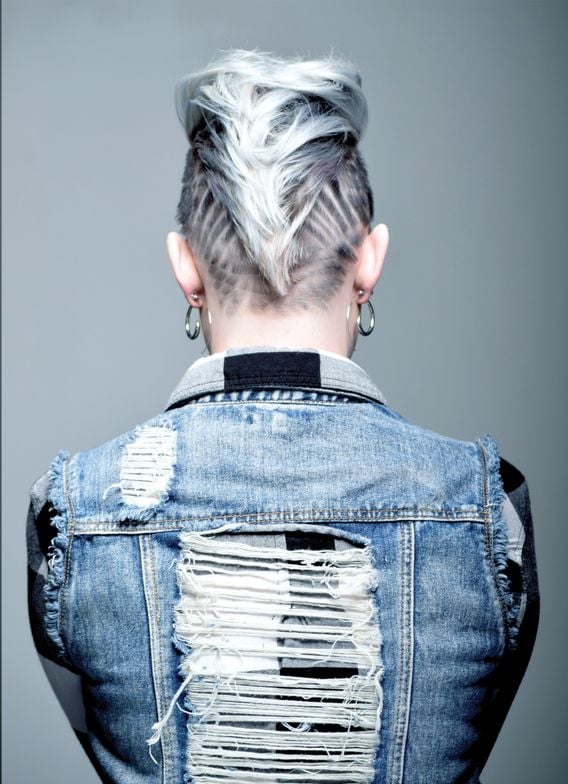 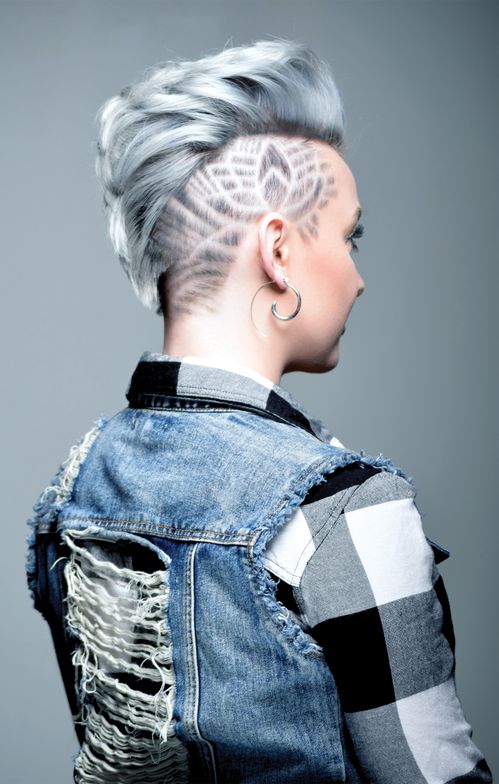 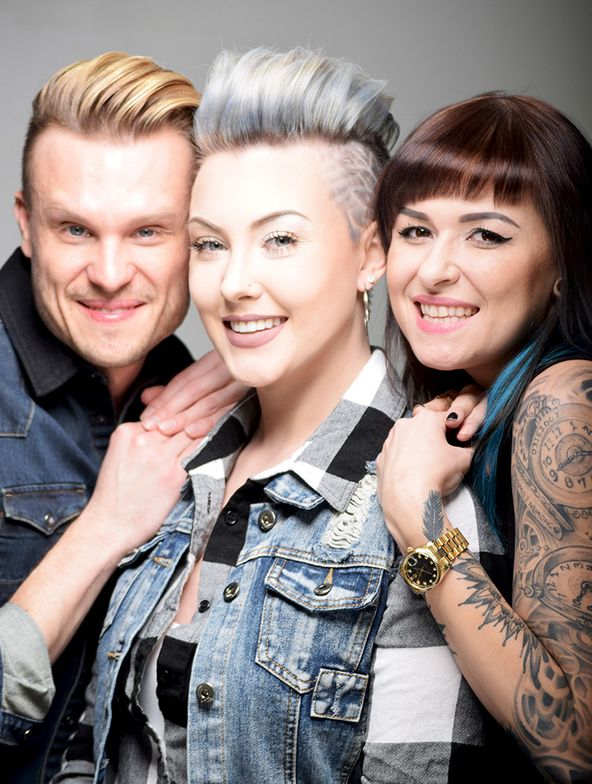 Jacquelyn Marie Hastings, Bii Hair Salon Senior Hair Artist and Instagram star decided it was finally time to break up with her long hair after a three-year relationship. The final result? A rock-inspired power chop!

To help with this radical change, Hastings asked Bii's chief creative officer and Pravana Guest Artist James Gartner to perform the haircut. Gartner immediately saw this monumental change as an opportunity for a photoshoot.

While updating the salon's social media, Hastings found the hair design she wanted, posted by Aga Dondzik, celebrity hairstylist to singer Carly Rae Jepson, who placed in the top three of Canadian Idol and has received two Grammy nominations.

"They weren't just any designs, but something that reminded me of Frank Lloyd Wright. I knew that if James and I were going to collaborate that we needed to add Aga's artistic abilities to really make a statement," Hastings said. "I decided to compliment her work and tell her I'd love to collaborate some day. It dawned on me to have three artists come together. If one of us can create something amazing by ourselves, what would happen if we all worked on a project together. They say 'three heads are better than one' right?"

Hasting says the next step was scheduling time for all three of the artists to collaborate together. After the contact was made, Dondzik signed on without hesitation.

"I was so honored when I was asked to be a part of this shoot," says Dondzik. "When exciting opportunities to collaborate with amazing people come up, I always jump at the chance to join."

She adds, "I am constantly on tour so being able to be back in a salon with an incredible group of people was a great change of pace, and the fact that we were all doing what we love most - being creative - was the icing on the cake. I am looking forward to more exciting collaborations in the future."

"We wanted to make it our own though. We wanted to mimic Miley Cyrus's style where it's her natural color on the sides but a blondish tone on top. For the designs, we wanted it to be more organic looking. The style and overall look of Aga's original shoot was 'harder' so we wanted to soften it up by doing designs like lotus flowers," Hastings said. "It also represents that our salon is a 'natural salon,' kind of an underlying theme for me. I tend to not have natural-colored hair, but I am all about the salon being green. You can be natural and unnatural all at the same time for your own creative self expression."

In the end, the most difficult part of the project was scheduling the creative entities. However, once the talent gathered, work commenced. Hastings performed the haicolor, going with silver- slate; Gartner did the cut, then Dondzik stepped in and created the graphics etched into the sides. She also added a touch of darker color on the designs to create more depth and dimension.

The result speaks to the power of combined talent and united effort.

"When Jacquelyn advised me that she wanted to cut all her hair off, I immediately thought let's make a shoot from it. Of course it was taken a step up when Jacquelyn Marie brought Aga in, who has some incredible artistic talents in hair design," said Gartner. "This, along with support from our salon teammates allowed for creativity to take flight and the results speak to that. The saying 'it takes a village' is so true when it comes to a successful shoot like this one."

In the end, Hasting's desire to change her look created more than a style. She notes the best takeaway from the project was the relationship with those involved.

"Inspiring one another, learning from one another and creating lasting relationships with other amazing artists was the best. We see many more collabs together in the future."

The flat iron — the Lunata Cordless Styler PRO — is the flagship product.

New perceptions of gender--more specifically, the greater acceptance of gender fluidity and things like choosing your personal pronoun — have opened the door to men’s acceptance of more traditionally feminine products and services. However, the marketing of cosmetics for men still retains a heavily masculine sensibility, but this is changing.

The line consists of seven unique brushes all with a specific purpose for individual hair needs.

Before you click a camera, know this: why are you creating the images? The success of a photoshoot hinges on your answer. Even if it’s just for fun, set a goal or purpose and stay focused to attain good results, otherwise, it’s like shooting fish in a barrel—you might get a nice photo, you might not.

Woven hair and bold colors create a conceptual feast for the eyes.

Macho Makeup Part One: The Concept

In planning our photo shoot, we asked the question: men with makeup, what is it? They have to be men who wear cosmetics for a more significant reason than to cover up a pimple. They want to look better and maintain an air of naturalness. It has to complement their lifestyle, I said to the team.

The 5-product line rescues hair at risk for breakage without weighing it down.

From hair to nails to makeup, artists made their celebrity clients look and feel beautiful.