MODERN SALON Editor's Note:  On Saturday, October 3rd in Hollywood, CA, Janine Jarman's Hairroin Salon celebrated a 10-year anniversary.  Jarman and her team presented a visual retrospect of Hairroin through the last 10 years including re-workings of some favorite collections and collaborations on live models.  Jarmine now has two locations--one in Los Angeles, one in New York--and her salon in New York  won the 2015 North American Hairstyling Award for "Salon Design."

The following is an essay Jarman wrote, now included in a collection of essays by women, describing her decision--despite fear, doubt and inexperience--to take a leap of faith and become a 24-year old salon owner.

If only those voices in my head would just shut the f**k up.

It’s too hard. You’re not smart enough. Who do you think you are? What if you fail ? That name … is way to edgy. And many more self-inflicting things that have tried and continue to try and hold me back. Well, I have a message for those voices..

It's late September I’m 24 and just moved to LA from the OC. I had been working at a small salon in Hollywood for three months. I come in one morning to find the salon in shambles. Everything turned over and ransacked.  A few staff packing up and leaving.  The owner had relapsed and was in jail. For whatever reason I stay, cleanup and continue to take clients. The next week I received a call from jail with the owner telling me to “hold the fort down “ till he gets out.  Great. Then final notice for water, phone,  electrical. Rad.  And lastly rent over due, pay or quit notice. Awesome. I call a fearless mentor of mine, Donna, to see what the hell I should do. She always pushed me to be better and act like a grown up. The strangest best advice I have ever received.

“Honey, call the landlord and see how much it is to take this spot over, cash out your savings and do whatever it takes to make that place yours. And whatever you do BE CAREFUL WHO YOU TELL… people are going to try and talk you out of this”

Ya, no kidding, because this is nuts! But this is the sort of crazy you should do when you are 24! Risk and risk often! Jump in always and figure it out later. And don’t listen to your voices or any one else’s that stand in your way.

So jump I did. Called the the landlord … cashed out my savings, to my financial dude's dismay ( I had been saving 20 % of my income, thanks also to Donna, since I was 18)… brought all the bills up to current, then marched on down to Men’s Central Prison with a notary…oh man, if you could have seen that scene. Thankfully he was in “the hole” so the prison guard was able to sign away the salon on his behalf.

Now, if you think I’m a vicious opportunist...maybe I am. And it's those sort of opinions that keep you from doing what you're truly meant to do. The reality is I choose not to do things that land me in jail. He on the other hand, likes to hit girls, shoot heroine and steal things (awesome arrest records I found during the salon clean up). Not to mention the 20 jobs people were out because he continued to be a f**k up. We are all responsible for our own decisions, good and bad.

And thus Hairroin Salon began.  Is it too hard? Some times but what great thing isn’t? I’m probably not smart enough …thank god because I would have been too smart and cautious to make what would be the best decision of my career.  Who am I ? Not a quitter, I’m a good person, who works her ass off. And I like to think that makes a good boss. What if I fail? What if I DON’T! I was 24 --it's not like my five kids would end up homeless. At worst I pick up the pieces and just figure it out. As for the name. Hate it or love it you remember it.

Don’t wait for people to believe in you. Tell those voices, yours or someone else .. .SHUT THE F** UP  you got sh*t to do. 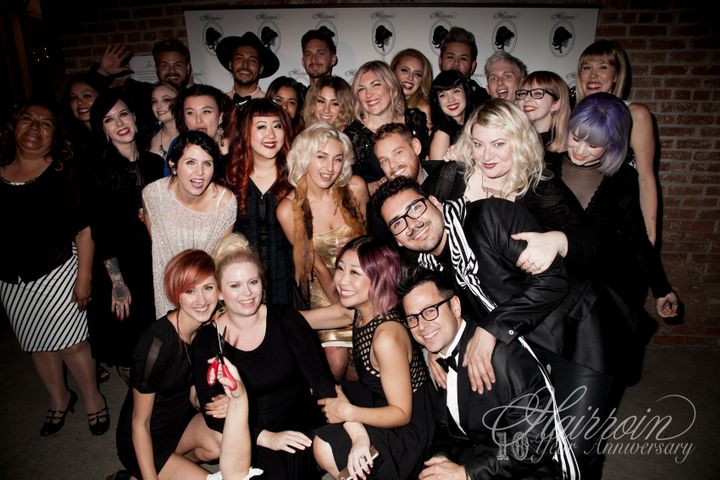 Jarman, second row, left, all in white, and her salon team at their anniversary party.