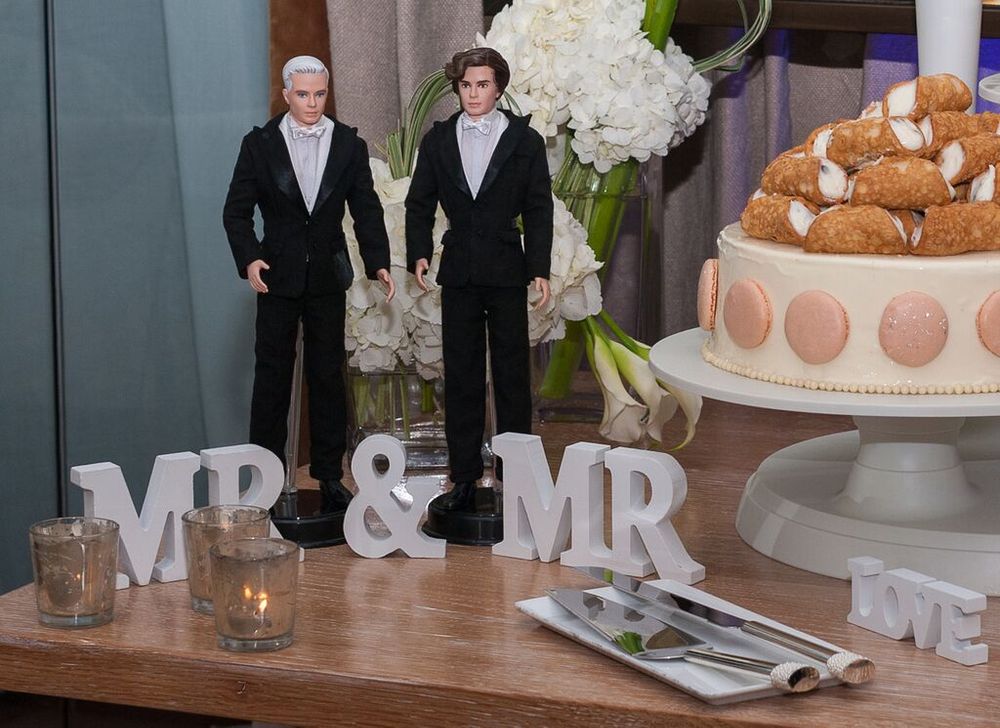 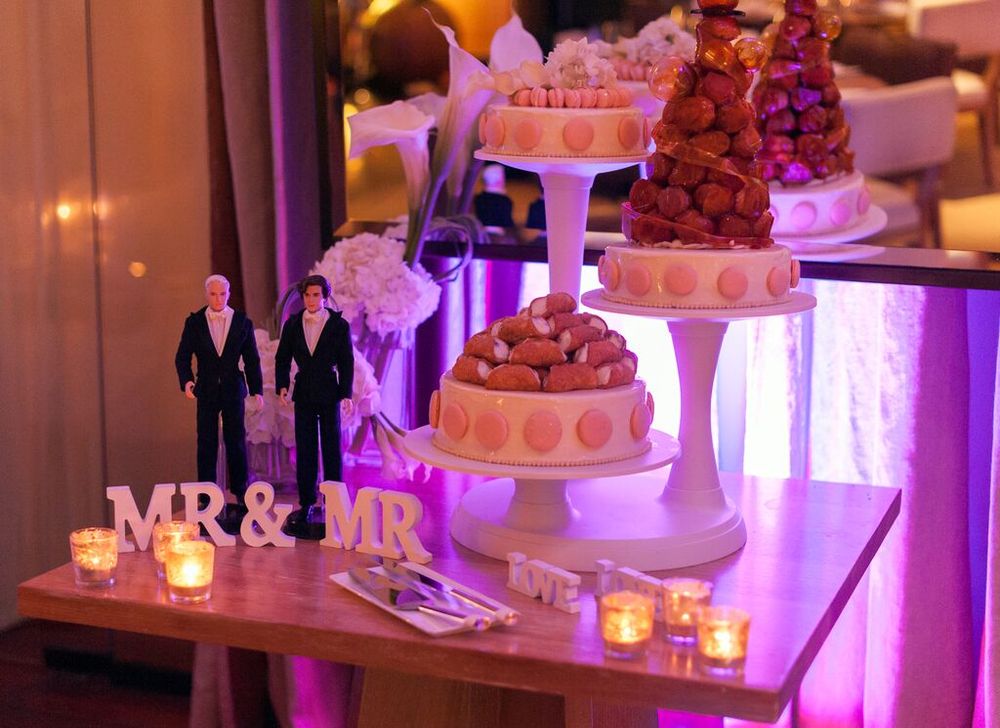 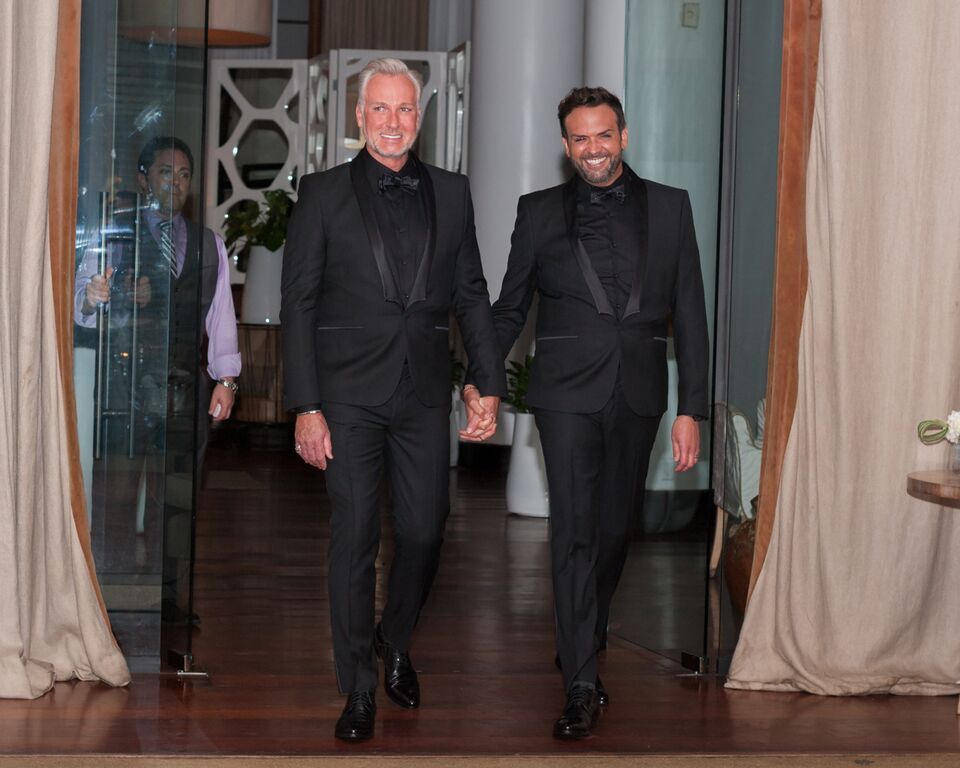 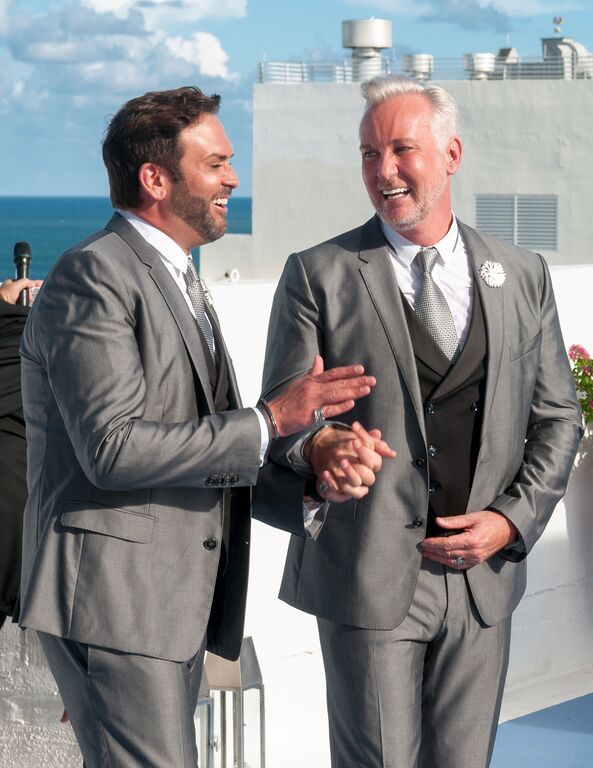 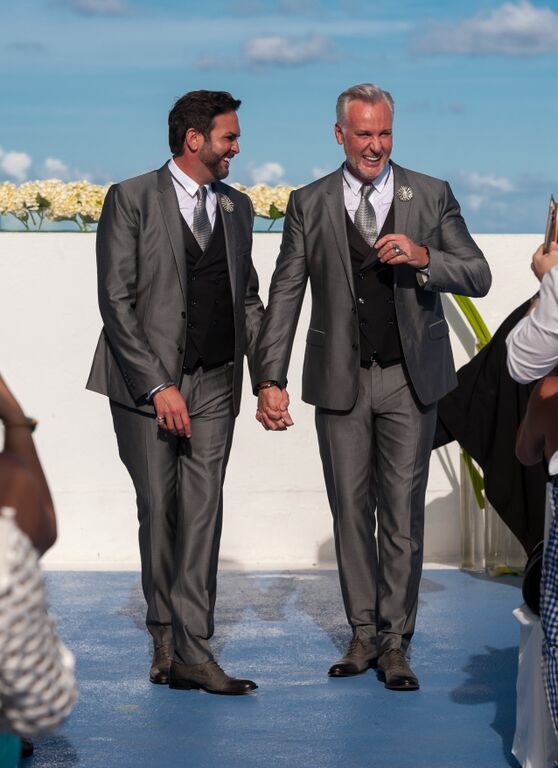 What happens when 2 great salon educators get married? It becomes the industry "Marriage of the Year." Christopher Dove and John Simpson were married recently in Miami Beach, Florida.  I was invited, but was out of the country for what appears to be a festive, glorious and elegant wedding.

I bumped into Dove and Simpson at The Blonds show during New York Fashion Week. They shared the answers to all the burning questions in our Periscope interview. For example, which name comes first? They sign their notes Chris and John, but when I asked for a recap, it was John and Chris!!!  I am so confused!!! However, here is the backstory to the union followed by the NYFW interview. Enjoy!

The wedding of John C Simpson and Christopher Dove

Almost a year to the day of their wedding these two international color icons met on a vacation in Miami . The fate of  both being in the same place at the same time was the first sign this was "meant to be."The odds couldn't have been more against them  - ,one based on the east coast, one on the west and each was the creative leader for two major competing global color companies. Yet as the saying goes True Love will always find a way.

At 5.30 pm on August 16th on the sun filled Solarium Rooftop of the Delano Hotel in Miami Beach, surrounded by thirty close friends and family members, Christopher Dove and John C Simpson were married. They were both walked down the aisle and given away by their mutual close friend Linda Dimariano, someone who was present for both during the complicated early days of their romance.

After the fun filled cheeky yet emotional wedding ceremony, the party began in the picturesque Orchard area by the artistically designed Delano pool. Finely crafted  finger food and cocktails including the British Pimms Cup were plenty and offered everyone a time to mingle and rejoice before a formal and fun dinner in the Delano Bianca Dining Room. Following the same classic and simple theme of florals with giant white lilies and hydrangea,  the dining room was a picture of elegance with an exclusive ambient lighting and a customized lounge area flanking the to be well used dance area .

The guests were treated to an a la carte menu and copious amounts of fine wines and champagne .The wedding cake was cleverly crafted with cannolies (honoring johns Italian heritage) and was flanked by miniature grooms customized to be the grooms mini me's (which kept disappearing all evening with some interestingly creative photos.)

A giant portrait of the couple and their dogs was commissioned for the event and guests were invited to write notes and well wishes as a forever keepsake of this special day . With lots of dancing through to the early hours. The guests left with gift bags of the couples favorite things including ORIBE fragrance, ReGenesis and Revitalash regimes, Aveda Rosemary mint gift collections, Spa Ritual Ginger Body Lotion and ambient candle, a Repechage Sun Protection mask and a cancer awareness flat iron by Enzo. Even the Jordan almonds were customized silver and slate metallics (again another twist on an Italian tradition ). A full day of fashion and fun, simply celebrating the authentic love of Mr Christopher Dove Simpson and Mr John Simpson Dove.

The couple say that it couldn't have been more perfect, from the ocean views on the roof top to the amazing modern decor of the Delano Hotel setting and most importantly, enjoying the amazing group of people who were there to join in the celebration of .  these two industry icons. This story has just begun. The two will now be living in Los Angeles where they will celebrate their freshly launched educational company named CoCre8.

UNITE PROTECTS is a system that includes a patented electrostatic sprayer that quickly and accurately kills germs/viruses on contact, both on and under surfaces, a hospital-grade disinfectant solution, personal protective equipment, sanitation wipes and spray, and one-use disposable capes, and towels.

Salons and Barbershops Allowed to Reopen in LA County

The county received the go-ahead from the state this morning to move into a new phase of reopening after two months of shutdown orders.

It’s one thing to reopen a single salon or suite during the COVID-19 crisis but try preparing to reopen hundreds, spread across the country. We interviewed Nick Stenson, SVP, Services and Trend at Ulta Beauty, to ask how its done and what it looks like.

In partnership with Square

To optimize time and resources, salons may want to consider using smart chatbots, easy-to-use software that conducts conversations with clients through text messages. This technology has become increasingly affordable and provides enhanced flexibility for salons.

The 2020 ABS Global Image Awards recognizes hairdressing talent on an international level. It celebrates the passion and artistry of professional and emerging stylists in a photo competition that features seven professional categories and two student categories.

This PPE resource list for salons and stylists includes masks, capes, dividers, gloves, partitions, air purifiers, cleansers, and MORE. Visit the brand sites by clicking through to the brand names in this article to see more options to create a safe and healthy working environment during COVID-19.

Pravana's promise is: "To empower stylists by providing them with superior products, unprecedented and unmatched in value,that will enhance their businesses and lives." When thinking about how it can live by these words during the COVID-19 crisis and help stylists, Pravana came up with it's newest initiative, the Stylist Transform and Empowerment Program (STEP Up).

Andreas Hogue Captures the 2020 Salons of the Year Design Competition

With its playful style and design surprises around the corner, Andreas Hogue Salon in Vernon Hills, Illinois, captures the 2020 Salon of the Year Grand-Prize title and the cover of the May/June issue of SALON TODAY.

Alfaparf is asking stylists to share their #silverlinings story on Instagram. Stylists that share their stories are automatically entered to participate in the $400 dollar giveaway of the Alfaparf Milano Stylist Relief Fund.

Coty and KKR signed a Memorandum of Understanding for KKR to acquire a majority stake in Coty’s Professional Beauty and Retail Hair Businesses at a contemplated enterprise value of $4.3 billion.