In any one day, a successful salon/spa owner plays multiple roles. He or she is a host, a visionary, a mentor, a cheerleader, a marketer, a negotiator, an artist, an accountant, a mediator and a community supporter. Individually, each role is vital, and packaged together they create a LEADER.

There’s no question it’s a tough job, and it requires the mastery of a diverse set of best business practices. No other industry competition examines, evaluates and shares what it takes to be a successful salon/spa leader quite like the Salon Today 200.

Over the past 19 years, the Salon Today 200 itself has shouldered many roles. It’s a competition that recognizes and celebrates the best and brightest salon owners for the managerial and leadership skills. It’s a barometer revealing important statistical data that salons of all sizes can use to measure their own growth.
It’s a forum that encourages salon and spa owners to share their success strategies and inspire all owners. And it’s a club through which like-minded owners have formed long-lasting relationships and support one other.

As we all plan for a new year, we’re excited to gift the wisdom of this information to the professional beauty industry, and we’re thrilled to present the 2016 class of the Salon Today 200.

By examining the collective data gathered from all the honorees, we are able to sketch a portrait of a successful salon or spa business.

• Opened its doors in 2005. More than half of the ST200 salons opened in 2005 or later, with a majority of them (68%) opening after 2000. The longer a salon has been in business, the greater the likelihood of achieving higher revenues. Salons who opened in 1998 or earlier were more likely to eclipse total sales of $2 million.

• Is a solo location. At 76%, a majority of the ST200 have only one location. Salons with gross revenues of $2 million or more are significantly more likely to operate multiple locations. Of those salons that do have more than one location, on average they operate three salon/spa sites.

• Leases real estate. A majority—79%—lease their space. Salons in the West are much more likely to lease than salons in the Northeast, Midwest or Southern regions.

• Occupies 4,585 square feet of space. This average is down 12% from last year. As a salon’s space increases, so do its revenues. The average square footage for a salon grossing $2 million or more is 9,223 square feet. Salons/spas grossing less than $500,000 in annual sales come in around 1,915 square feet.

• Seeks help. Half the ST 200 reported consulting a salon or business coach in the past three years.

• Stays connected. Two-thirds—64%—belong to one or more industry associations. Popular choices include the Professional Beauty Association, Intercoiffure, Cosmetologists Chicago, the National Cosmetology Association and the 2 to 10 Network.

• Huddles with their teams. At 99% percent, almost all the ST200 honorees hold regular staff meetings, usually monthly. Salons with revenues between $500,000 to $999,999 are more likely than other salons to hold weekly meeting.

• Is upselling. Although the average number of client transactions decreased slightly over last year’s numbers, the average total per ticket increased to almost $79. 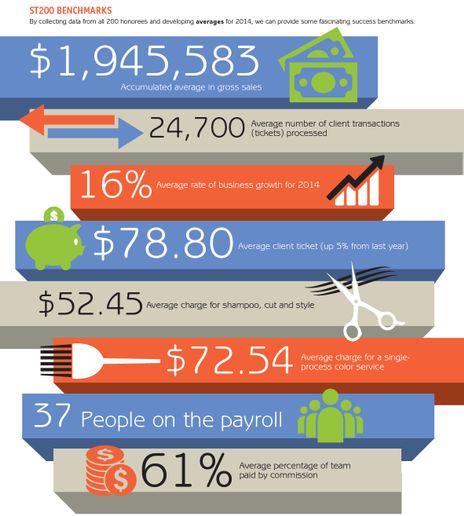 When you look at what contributes to the gross sales revenues of the ST200, haircolor service sales top the list at 35%, closely followed by haircutting service sales at 31%. Rounding out the income generators are retail sales at 18%, skin care/spa services at 7% and nail and chemical services at 3% each.

For the past five years, the percentages for expenditures for the ST200 have remained virtually unchanged. The largest continues to be labor costs (48%), followed by supply costs at 11%, rent or mortgage at 7% and taxes at 6%. Rent or mortgage expenses continue to be a higher percentage of total expense for salons in the West than in other regions. 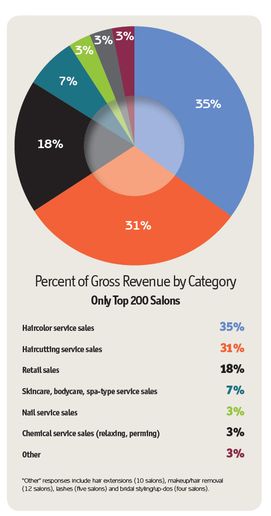 Although the data collected from the ST200 reflects on the best business practices of the professional beauty industry, it also provides interesting insight into the people who own those salons.

As a group, the ST200 owners examine a number of key performance indicators to measure and track their salon business. Productivity—or percentage of time booked—topped the list at 23%, followed by average ticket (total sales/client count) at 19% and client counts at 13%. Rounding out the key performance indicators were existing client retention, pre-booking rates, new client retention, retail per client ticket, percentage of service clients purchasing retail and frequency of visit.

We asked owners what business issues keep them awake at night. Throughout the past three years, this has remained steady, with inability to reduce expenses and keeping staff busy as top concerns. On a positive note, owners have become less concerned about the economy over the past three years.

The topics of concern vary, though, by the size of the salon operation. Owners of high-revenue grossing salons ($2 million or more) are more likely to be concerned about keeping their staff busy, threats of a walkout and dealing with competing salons. Salons with annual revenues less than $500,000 are more likely to be worried about how to improve their profitability and find financing for expansion. Of all their business costs, these owners feel they have the least control over inventory, service supplies (including backbar and shrinkage.)

Click on the links below to discover the honorees in each category:

Our Q&A reveals the entrepreneurial spirit of seeing a void and filling it.

Now in its 8th season--and soon to launch Season 9--the nail industry's most prestigious competition develops contestants as they go move through the weekly challenges. The winner was announced during CND's NAILATHON broadcast, October 4.

Discover your new signature scent with the Oribe Eau de Parfum Collection. Each fragrance evokes an individual mood and embodies its own unique identity. The fragrances transport the wearer to dreamlike destinations, for a true sensorial experience. Together, the trio of gender-neutral scents is the ultimate modern fragrance wardrobe.

It's the first machine in the world to instantly create unlimited formulations and dispense perfectly mixed hair color in under two minutes.