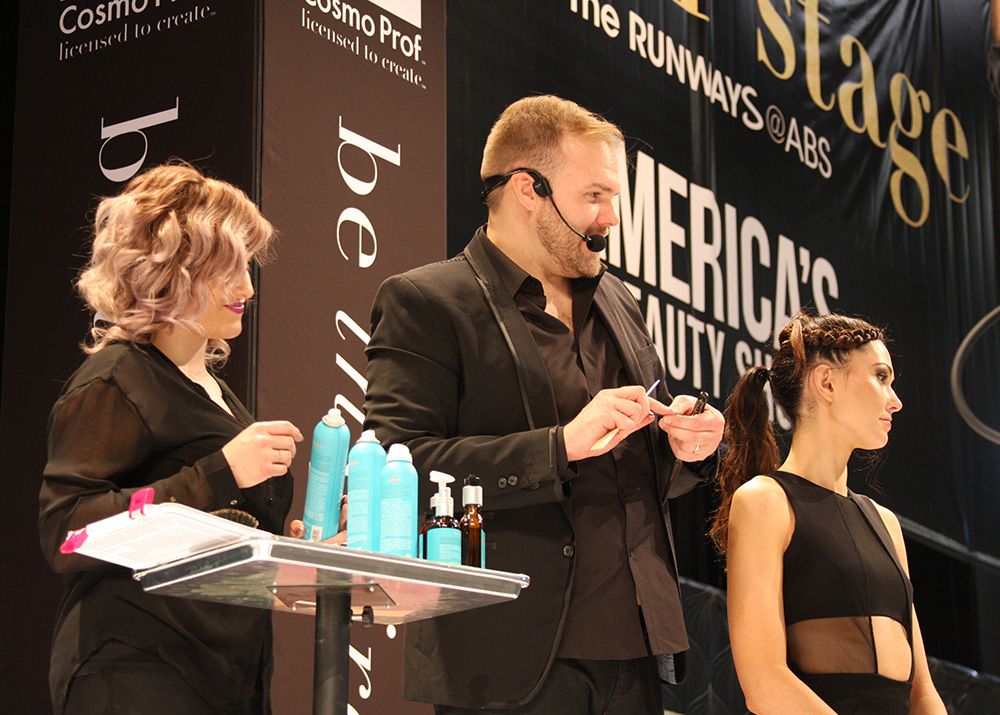 Global Director of Education Robert Ham answers a question from the audience. 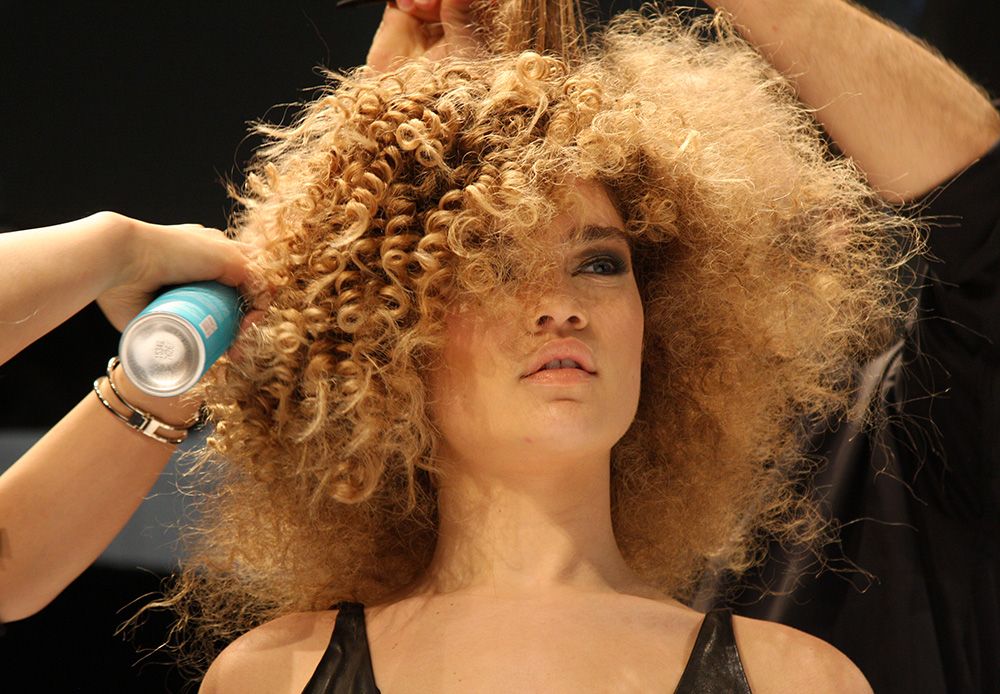 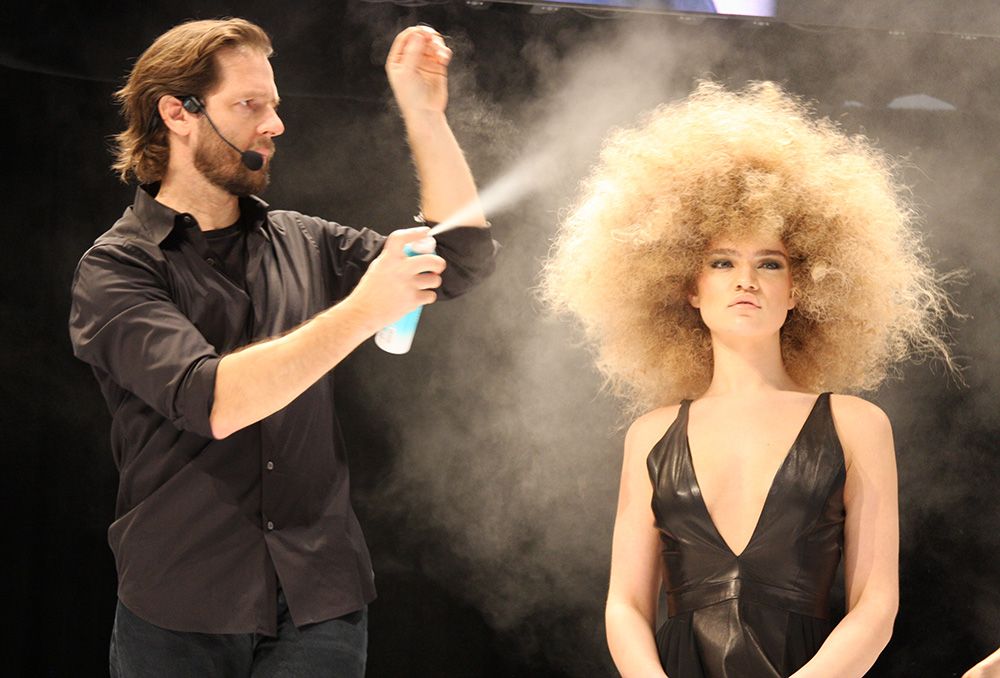 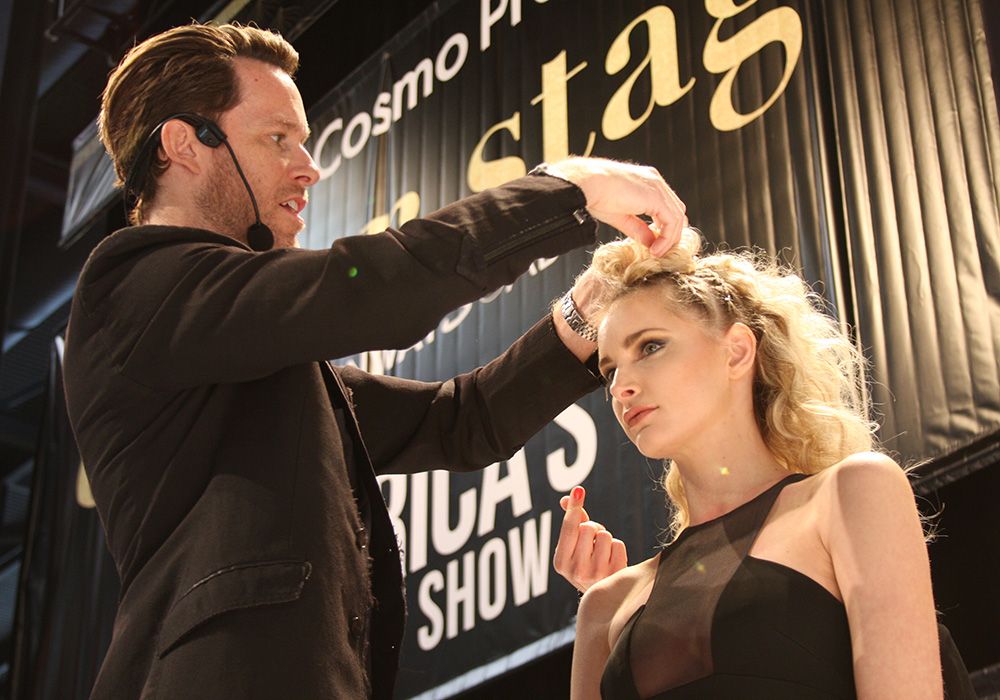 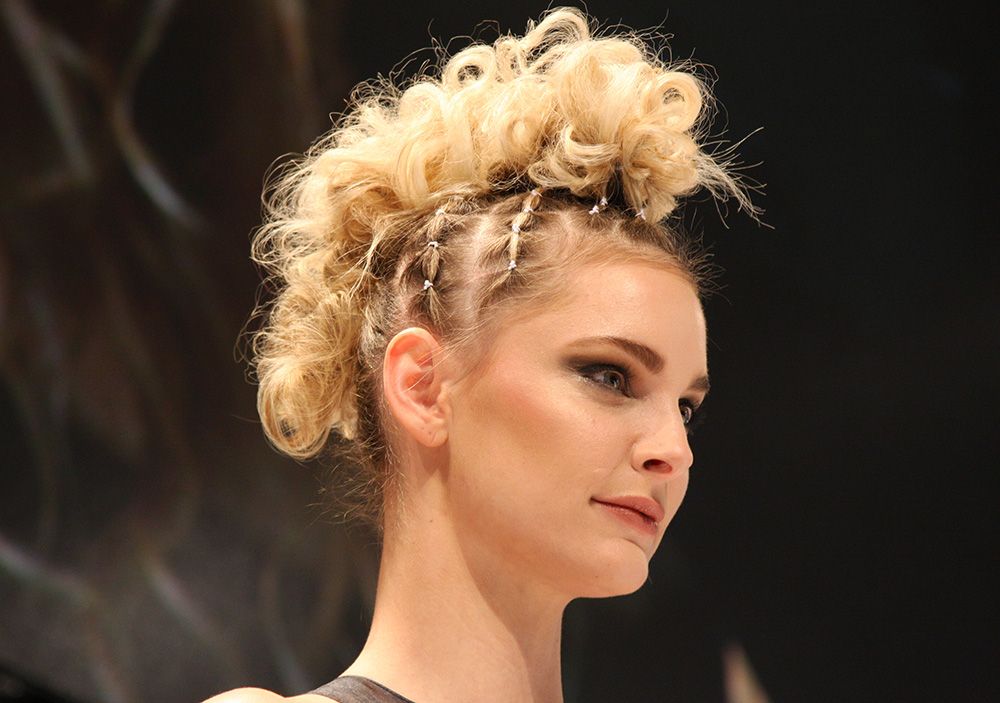 Global Ambassador Kevin Hughes' updo that uses the boning technique to create the stitching effect on the side of the head.
1/5
View all

1/5
Slider
Global Director of Education Robert Ham answers a question from the audience.

5/5
Slider
Global Ambassador Kevin Hughes' updo that uses the boning technique to create the stitching effect on the side of the head.

Performing for their first time ever on the Runway at America's Beauty Show (ABS) in Chicago, Morrocanoil, showed off how to create beautiful, healthy-looking hairstyles during their presentation on the CosmoProf Centerstage. Their show was divided into two segments which both focused on taking runway-inspired styles and transitioning them for your clients.

Hughes prepped his model with a technique he saw from the 2016 Donna Karan Show at New York Fashion Week. The technique, called boning, creates a spine effect in the hair utilizing a thread and hair needle. Since his model had fine hair, he used Moroccanoil Treatment Light and Thickening Lotion to create added volume. He then went in and curled the hair with a 3/4-inch curling iron. Hughes finished off the look with Dry Texture Spray and then after it was set, Moroccanoil Hairspray Strong Hold.

Gray methodically took section by section of his model's hair, unwound it, and then with a backcombing motion pushed down on the hair to create out-of-this world curly volume. The result was a bouncy afro.

Moroccanoil went "back to the basics" during the second part of their presentation, where they showed how to create three inspiring ponytails you could bring back to your business.

When determining the type of ponytail that will fit your client, first study their profile. "I always look at the nose, the neck, and the forehead. The higher you pull the ponytail up, the longer the neck is going to look," says Gray. "The lower you go, the more sporty and casual it's going to be."

Ham also said to pay attention to your client's nose shape. "If it's more pettite, then you want to go higher with the ponytail. The larger the nose, the lower you want to go," he says.

Color The World 2022: A Virtual Education Summit by Cosmo Prof

Cosmo Prof's Color The World event is coming up fast! Get your tickets to the virtual education summit, taking place Oct 16-17.

The most-loved products from Keratin Complex, R+Co, and amika take to the runway! See some of the amazing hairstyles created by top stylists at New York Fashion Week.

America's Beauty Show and Bobit will work together to fill the 400,000+ square foot exhibit floor with top brands while reaching thousands of professionals and inspiring them to come together at ABS 2023.

Oribe and their team of top stylists show off the amazing runway hairstyles they created at New York Fashion week for a full range of luxury brands.

In SALON TODAY's complimentary webinar September 12th, five owners share their favorite technology tools and how they are helping them run smarter, more successful businesses. Register now, and watch when you can.

Stylist, Educator, and Founder of Kolour Kulture Keya Neal is hosting the fourth annual Texture VS Race Summit on November 27-29 in Baltimore, MD. Join them for three days of hands-on education all about textured hair.

Learn the secrets to salon industry success when you attend this first collaboration of two icons, set for September 19, 2022, in New York City.

A host of influential industry speakers scheduled to present at Vagaro’s inaugural user and prospect conference, iconic.22 in September, will engage with attendees about best practices for business and revenue growth.

Ashley Graham Announced as Keynote for BOLD 2022, The Mindbody Conference

All About Hair: A New Hands-On Education Experience Is Coming to Los Angeles

Mark your calendars for All About Hair, an education event with classes taught by some of the best educators in the hair industry. Taking place in Los Angeles on September 18-19th.

Denman Professional is launching their very first Stage Star USA competition to award hair professionals for their passion and promise, with an all expense paid trip to London.