At America's Beauty Show in Chicago March 12-14, Candy Shaw led demonstrations on how to flawlessly create her Sunlights Balayage. Dressed in her signature yellow and black, she taught how lightener should be applied to create seamless, natural-looking balayage highlights. Then she gave us the three make-it-or-break-it essentials to creating the perfect balayage.

To create Sunlights, Shaw began by taking a section of hair and gripping it about 1/3 of the length of the strand from the root so that it formed a triangle. Next, she painted the lightener onto the left and right outer lines of the triangle until she reached her fingers. Then, she slid her hand down and continued. When she reached the end of the strand, she loaded her brush dropped the strand onto the bristles of the brush, pulled the brush towards the end of the strand and let the hair fall onto her paddle. Then she finished painting lightener onto the ends. She lightly laid plastic wrap between layers and folded over about an inch at the top of the wrap so that the next layer would be lifted a little. 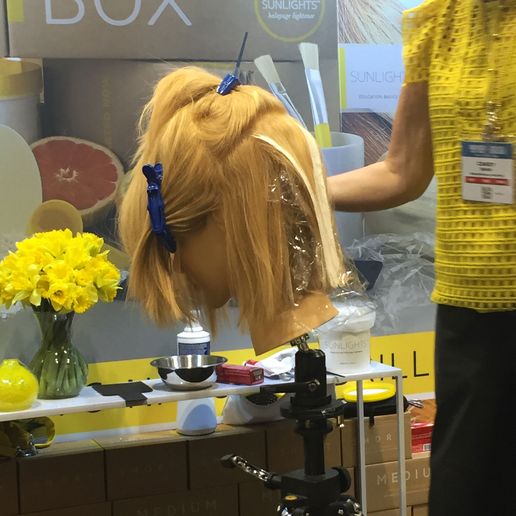 The 3 Pillars of a Perfect Balayage

1. Consistency of Product — Lightener should be a thick, cream cheese consistency so that it will stick to the hair. If it is too thin, you can end up with messy application.

2. Brushstroke — When applying the lightener, in sweeping, side-to-side motions with the brush held perpendicular to the hair. Do not place the brush flat against the hair and push it down in short increments as you would when foiling because that will cause uneven distribution of the lightener.

3. Saturation — Fully cover the strand with product to ensure lift. "If it's not white, it's not light," Shaw says.

Shaw added that if you are doing a balayage that shifts from dark to light hair, use a shadowing technique to blend the color. Paint the lightener on in a triangle shape as described above, then fill the triangle with a demi/semi-permanent color. Do not paint the lowlight all the way to the tip of the triangle because that will leave ends looking dark and murky.

How to Achieve the Brightest Hair Colors for Pride Month 2022