Beauty is ageless. It's a maxim that applies perfectly to Kathy Knodle.

Knodle, who has two daughters and eight grandchildren, enrolled in the esthetics program at Tricoci University of Beauty Culture's Rockford, Ill., campus in December.

Beauty is also a family affair for Knodle, whose 19-year-old granddaughter, Saige Pierce, entered the same program in March.  Knodle's daughter and Pierce's mother, Laura Pierce, a licensed cosmetologist, is Vice President of Operations for all of Tricoci University's 14 campuses in Illinois and Indiana.She started her career as general manager of the Rockford campus 10 years ago. Laura Pierce says watching her mother and daughter flourish is a wonderful thing.

"I'm thrilled that at age 64 my mom has decided to follow her dream, and I'm thrilled Saige is following her own dream as well," says Laura Pierce.

For Knodle, esthetics is the next step in a life and a career that has constantly evolved.

"I've been blessed to be successful throughout my career," says Knodle, who has owned a women's health club and was a long-time Mary Kay representative. "In this season of my life it's all about giving back. I love helping people, and I want to use my skills to inspire other women to flourish."

As a junior at Freeport High School, Saige Pierce was looking forward to a career in nursing but she realized, after enrolling in a program, that it wasn't the right fit. She was passionate about makeup, however, so she decided to switch careers paths.Knodle says she looks forward to seeing her granddaughter's success when she enters the esthetics program.

"I'm excited she decided to pursue her passion at such a young age instead of getting locked into a career or a job she hates," she says.

Laura Pierce says she knew Saige would come into the business one day. "Saige started coloring hair on a mannequin when she was two."

And Knodle echoes this sentiment. "We have all come into the industry naturally."

For her part, Saige Pierce is a bit nervous about being in the same program as her grandmother because there is a lot to live up to. "She has had such a successful career, but we're both very passionate about esthetics and she's very supportive," Saige says.

When the two finish their respective programs, Saige wants to get a lash extension certificate and a tattoo certificate so she can do eyebrows, and she wants to work in downtown Chicago. Knodle thinks she may open a women's health center that offers classes like yoga and massage therapy in addition to esthetics.

And Laura Pierce looks forward to seeing both of those dreams come true.

"The wonderful thing about this industry is you can have it all. You can work as little or as much as you want to have the career that works for you," she says. 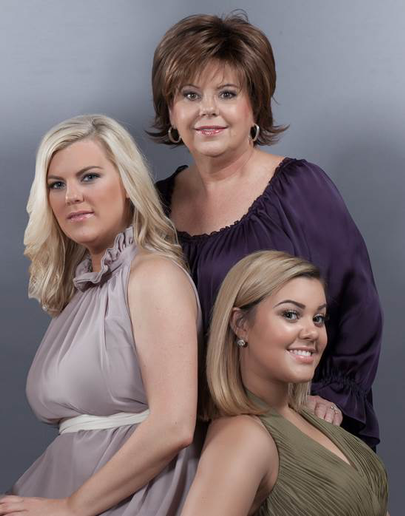