Chicago-based stylist Dilek Onur-Taylor, who is part of the core team for The Salon By InStyle inside JCPenney, isn’t just a master stylist. She’s a master colorist, educator, cutter, platform artist and, adding to her long list of accolades, a three-time finalist in the 2016 North American Hairstyling Awards in the categories of Contemporary Classic, Texture and Avant Garde. A past winner of the Texture category, this year Onur-Taylor earned the award this year for her Contemporary Classic collection.

But in addition to being an industry icon on stages and newsfeeds nationwide, she also balances a host of other responsibilities. Because Onur-Taylor is constantly switching gears, when it’s time to start conceptualizing her theme for her NAHA collections, she has to get creative with time management.

“I’m a mom, I’m a boss, I’m a wife—it’s like I have to flip a switch on and off: ‘OK, now I’m going to be creative,’” she says. “I know there are hairdressers who are in that artist mood 24/7, but when I’m with my kids, I’m their mom. They don’t think of me as a cool hairdresser—they give me a hard time about it.”

In fact, as Onur-Taylor picked up the phone to talk to me about her three nominations in this year’s competition, which is hosted by The Professional Beauty Association and proudly co-founded by MODERN SALON, she was juggling expense reports in between conference calls for the corporate side of her job’s responsibilities. But dressing hair is the consistent form of therapy that settles her.

“When I get stressed out, I grab a mannequin head,” she says. “It’s how I clear my head. I practice new braiding techniques.”

When Onur-Taylor is ready to start shooting for NAHA, which celebrates the artistry of hairdressing through photography, she doesn’t just walk on set with a vision; it’s a month-long prep process.

“My younger son jokes, ‘Oh, it’s that time of year again where we can’t eat in the kitchen for a month,’” Onur-Taylor says. “The kitchen gets completely shut down with mannequin heads, hair wefts, foam forms. They can get food from the kitchen, but then they need to leave. They can’t touch anything. I need everything laid out so that every time I walk in the kitchen, I can look at it and think of something else. I change my NAHA vision five times before I’m done with it.”

CONTEMPORARY CLASSIC: THE CONCEPT AND TECHNIQUE

Onur-Taylor grew up in the ’80s when trends oozed punk rock and when the supermodels were becoming household names.

“In the ’80s, models were no longer just pretty faces,” says Onur-Taylor, who describes herself as an Albanian girl from Turkey living in America. “I was obsessed with them. They were ballers. I once read that Linda Evangelista said she won’t get out of bed for less than $5,000 a day. And Naomi Campbell was always in trouble. So I took the supermodels, fashion and the ’80s as inspiration and put a modern twist to it by imagining what the hair would look like today.”

Onur-Taylor then came up with cheeky names and gave the models birthdays in the ’60s, and dubbed the collection Girl Gang.

“I won the Texture category before, so I’m always trying to create a new curl pattern,” she says. “I took long wefts of hair with firm-hold sculpting mousse, and while I was sitting on the floor of my kitchen, I grabbed the oven rack out of my oven to see what kind of texture I could get with it.”

Onur-Taylor laid the wefts on the rack and used flexi-rods for perm wrapping to create weights between the grids, resulting in a deep, oval pattern. Once she was on set, she used a flatiron to reinforce the seams over the grids. She then recreated the pattern in the model’s existing hair using a micro flatiron and curling iron.

“The model’s hair was so fine; the wefts helped,” she says. “Some of the curls were perfect and some not perfect. That made it more interesting.”

Perhaps her days of mommyhood helped her when creating the woven strands in the collection, too, using the schoolhouse-famous potholder weaving technique as inspiration.

“I practiced that weaving on wefts of hair probably 50 different times in three weeks,” she says.

TEXTURE: THE CONCEPT AND TECHNIQUE

“The inspiration here is early ’70s and all about disco and glam,” Onur-Taylor says. “I have this obsession with afros and creating new shapes in curly hair.”

When Onur-Taylor looks for inspiration, she finds it.

“We were in a New York restaurant and saw a herringbone floor,” she says. “I loved the different colors. I thought, ‘I have to do that with hair.’”

For this collection, it was the 1970s Onur-Taylor looked back to.

“Back in the ’70s, women used to wrap their hair with a scarf,” she says. “I wanted to give that illusion of very disco-y wrapped hair, but with something peeking out. It sort of reminds me of JLo.”

For the afros, Onur-Taylor used her heavy-duty clippers and trimmers to create the big notch out of the silhouette.

“We played a lot with lighting to make sure it cast a darkness and shadows on the one side so it looked even deeper,” Onur-Taylor says. “Roberto would shoot it, and then I would see an area I wanted to highlight and go back in, reinforcing the depth using the outside of a can of hairspray to mold the shape.” 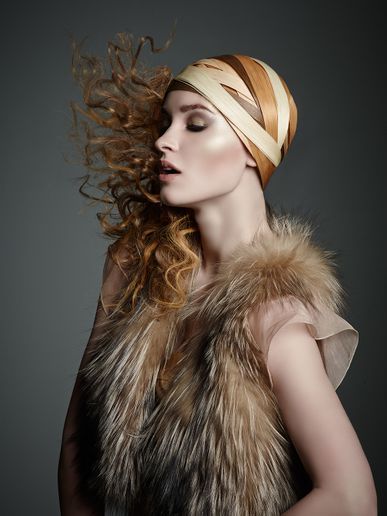 AVANT GARDE: THE CONCEPT AND TECHNIQUE

“I had recently got an Alexander McQueen book, and I was fascinated by the dark side of his imagination but then the depth and beauty of it, too,” she says. “I was looking through his helmets and embellished hairpieces, and that’s where I got the inspiration. I really wanted to figure out a way to put holes in the hair without the hair falling apart. It took me three weeks to complete the wefts. If the lacquer wasn’t strong enough, the hair would fall apart—you can’t put holes in the hair, it’s not normal!”

Finally, it was a grommet punch used to put holes in drapes that did the trick.

When creating the masked model, she went to Mood, a fabric store in New York City made famous by the contestants on Project Runway, to browse the possibiltiies.

“I found a pillbox hat form and draped wefts that were coated in gelatin over the form to create the effect of a cage over her face,” Onur-Taylor says. “I carried the wefts with me on the plane to New York inside of cupcake carriers. I didn’t check anything—including the oven rack!—I was too freaked out that they would get squished.” 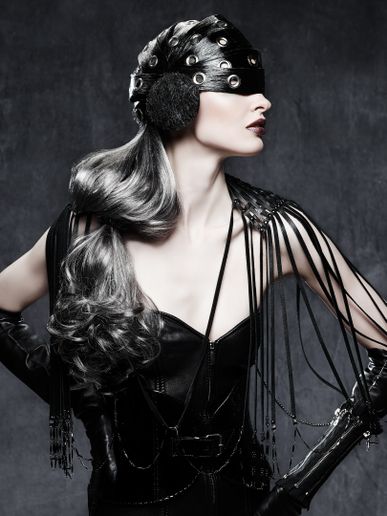 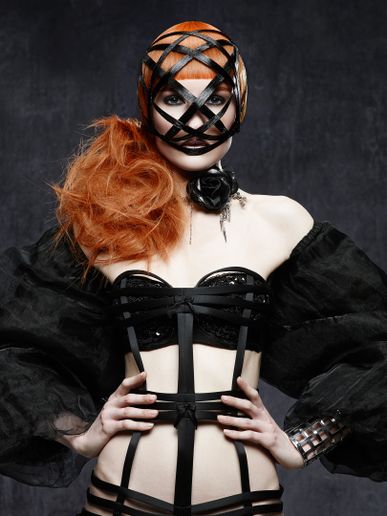 “It was super important to me to choose a model to pull who could wear these headpieces and still feel sexy, and like a woman and strong,” Onur-Taylor says. “I used the same model in all three looks. These models need to have the right attitude, and every time I put a headpiece on her, she transformed.”

“The first time I won NAHA, I was like, ‘OK, it’s off my bucket list,” Onur-Taylor says. “But as soon as I got back home, it went right on my bucket list again. Competition makes me try harder, do better and raise my own bar.”

The inspiration for education and platform work started early in her career, too.

“The first hair show I went to when I was 16, I remember seeing Vivienne Mackinder on stage, and I knew that’s what I want to be,” Onur-Taylor says. “She was gorgeous, and while it was such a hokey time in beauty where it was all about performing and the song and dance, she was brilliant.”

When Mackinder won a NAHA last year, Onur-Taylor was bursting.

“I’ve been watching Vivenne her entire career,” she says. “And though I’m not yet in her league [EDITOR’S NOTE: we disagree], I’ve worked my way up through hard work and dedication and being true to my craft, giving it 200 percent all the time.

“This sort of work creates inspiration for people that are up and coming. It makes them want to try harder and gives them something to aspire to be. Competitions like NAHA makes future hairdressers want to do more. This is a business where you can never get too comfortable because things change so fast, and I like being slightly uncomfortable. When someone just out of school comes up to me and says, ‘I follow your work, and you’re amazing,’ that means more to me than anything anyone can say.”

ON THE IMPORTANCE OF WINNING

“I don’t see NAHA as a competition,” Onur-Taylor says. “I’ve looked up to so many artists in my career and had such great mentors. But I never really put myself up there with them. Every time someone tells me, ‘Your work is amazing,’ or, ‘I saw you published,’ it’s sort of strange to me. I’m always going to try harder to do better. I’m my own worst critic with photoshoot work. It’s not about competition with other artists; it’s about earning their respect. That’s what I love about it. I wish we could all win.”