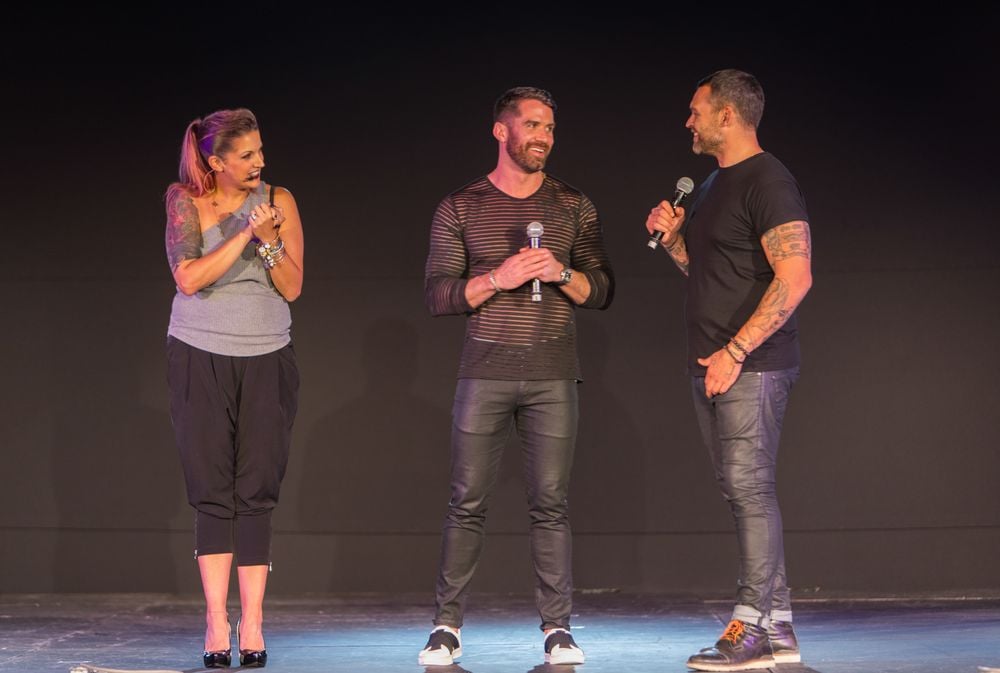 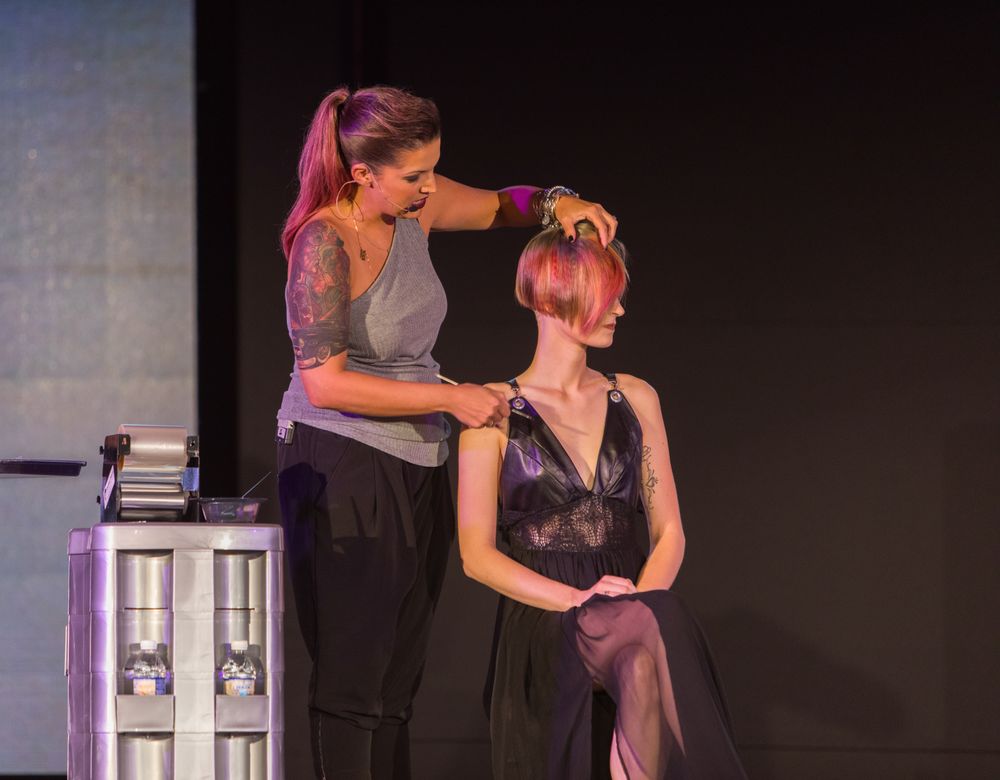 Freeman teaches easy, impactful and quick color techniques during the “Color Inside the Lines” class.Credit: David Webber for L'anza 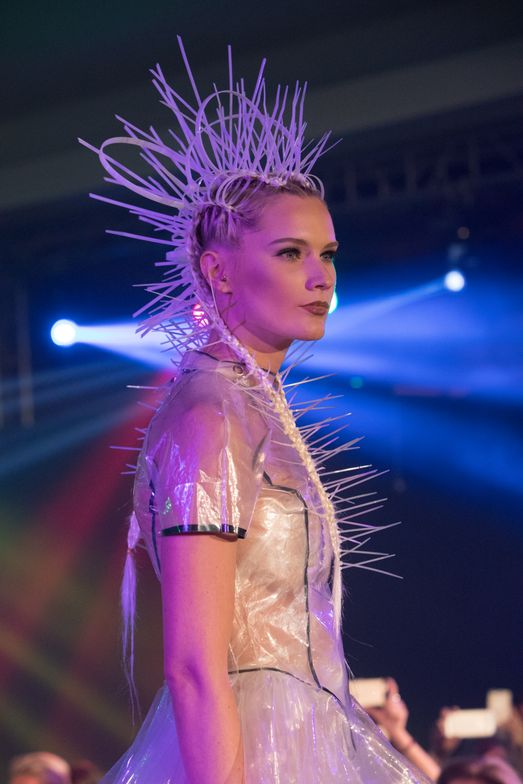 The message of sustainability echoes during the “earth” segment of the B.I.G. Show. Credit: David Webber for L'anza. 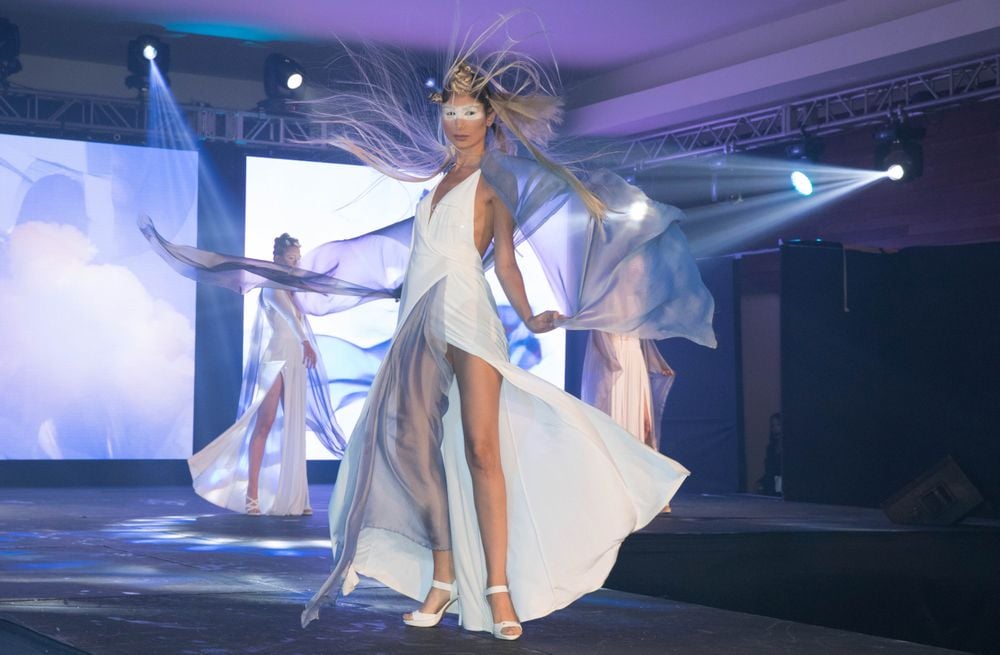 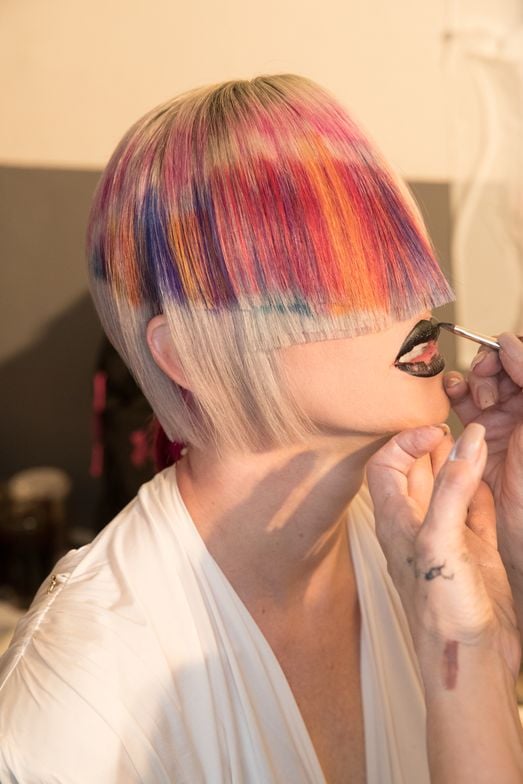 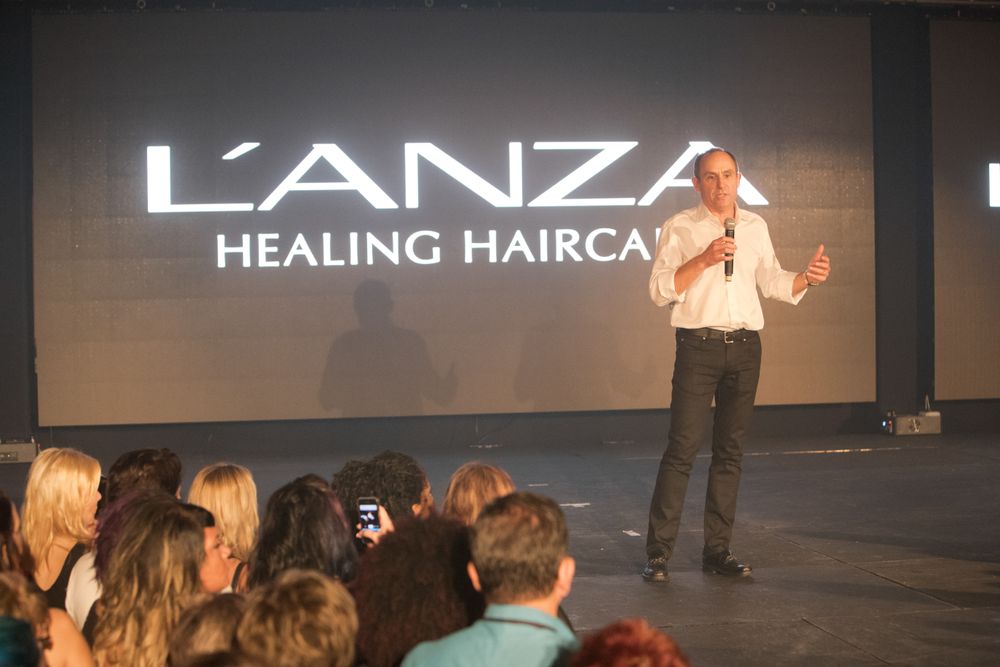 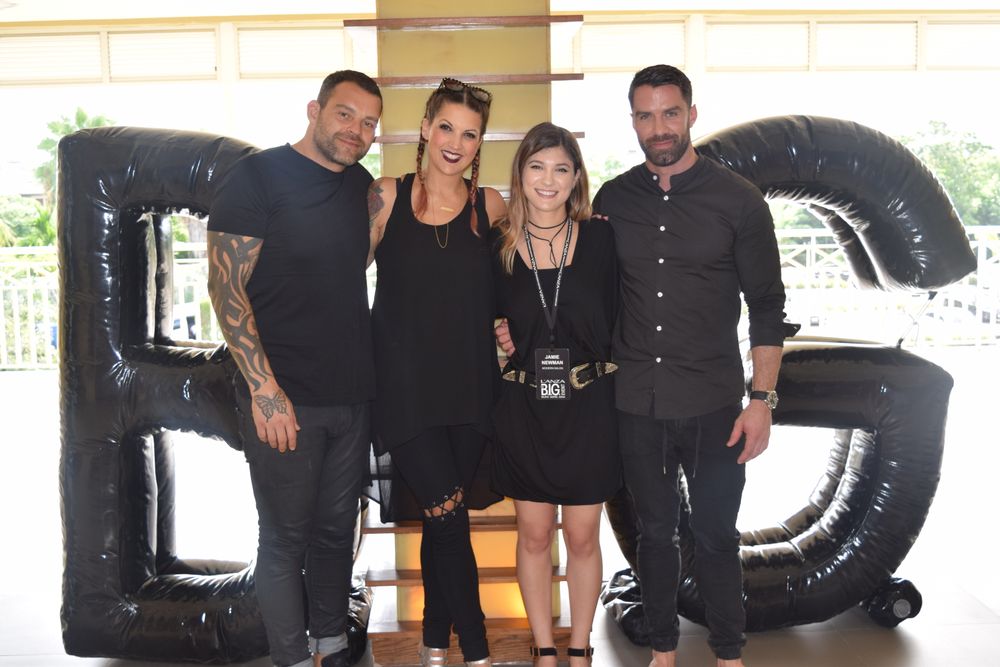 MODERN editor Jamie Newman and Carver, who is holding the November issue of MODERN, with a cover image by Ammon Carver Studio. 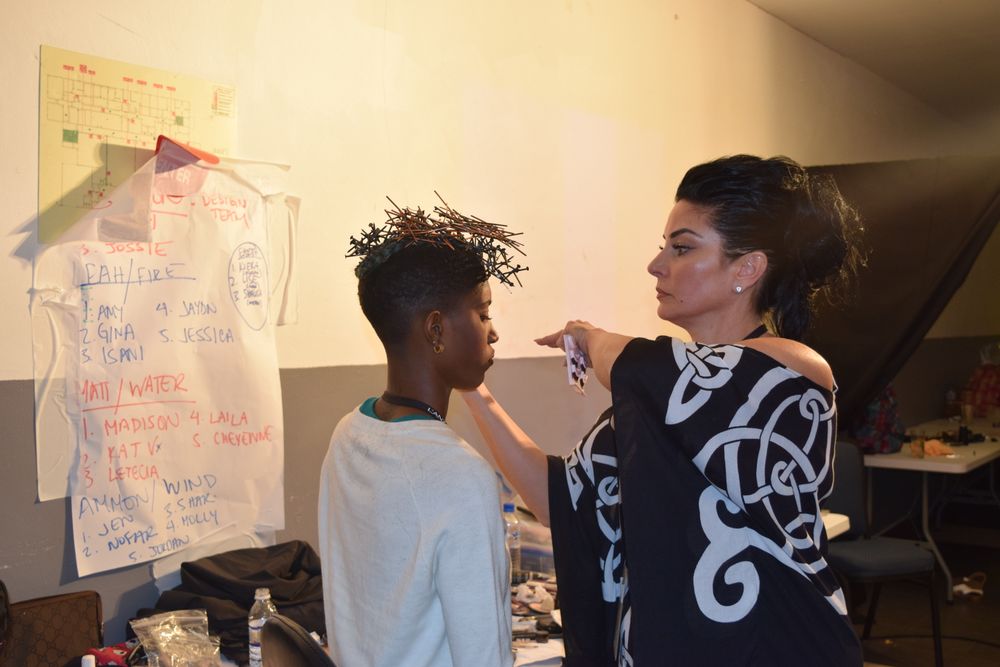 Makeup Artist Lizette Zlogar with a model before the B.I.G. Show. 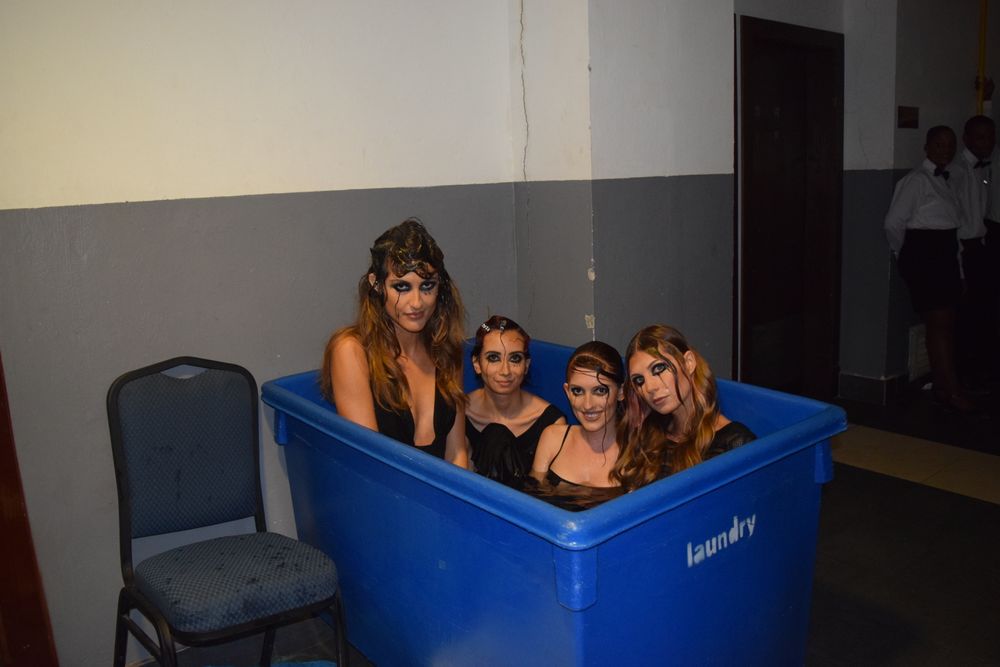 Model's preparing for Swinney's "Water" segment of the B.I.G. Show. 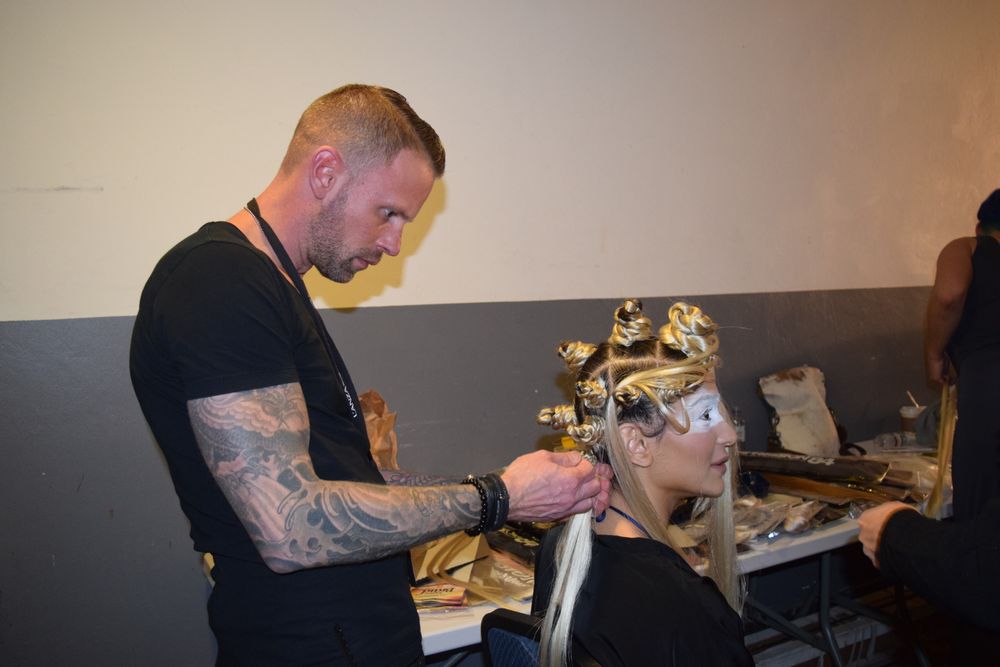 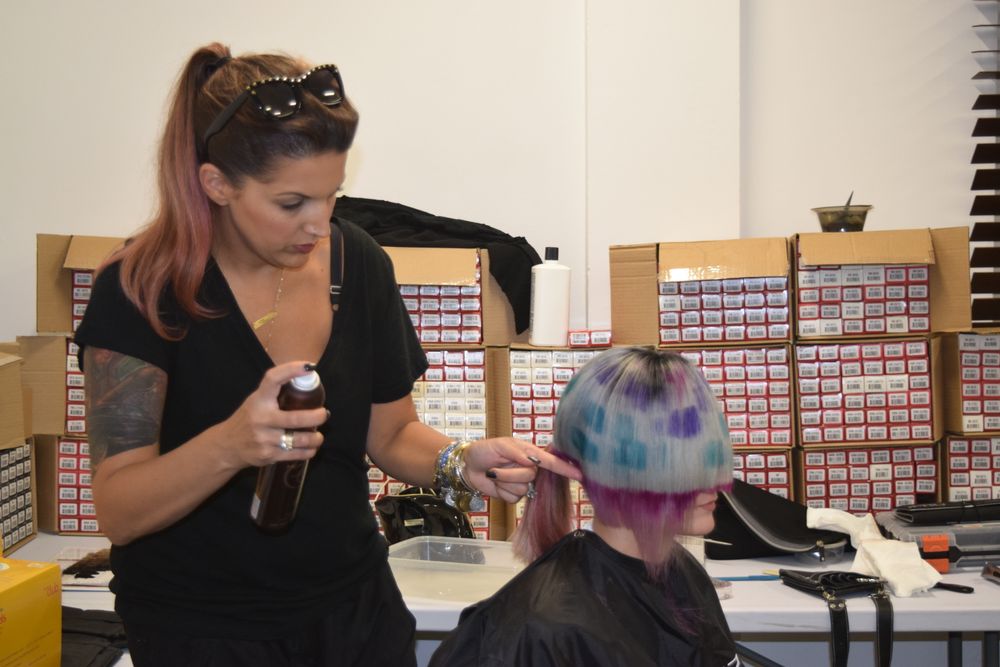 Freeman before the B.I.G. Show.

David Berglass addresses the audience at the start of day one. 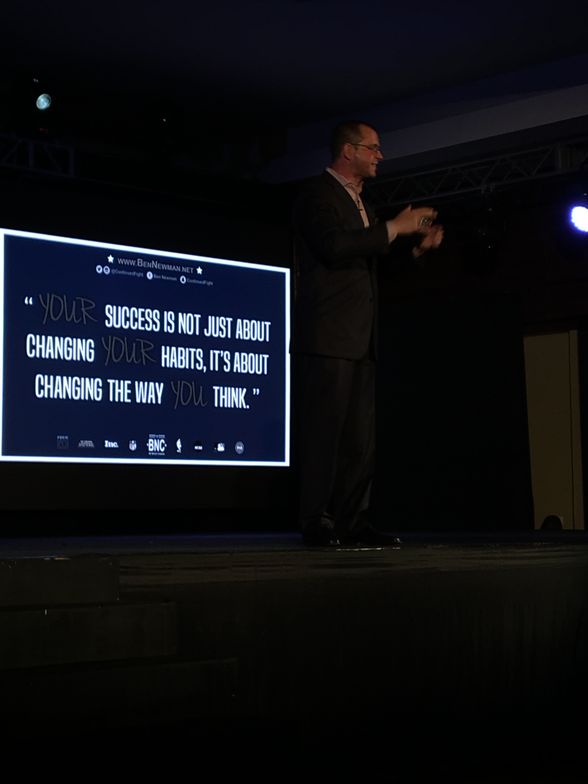 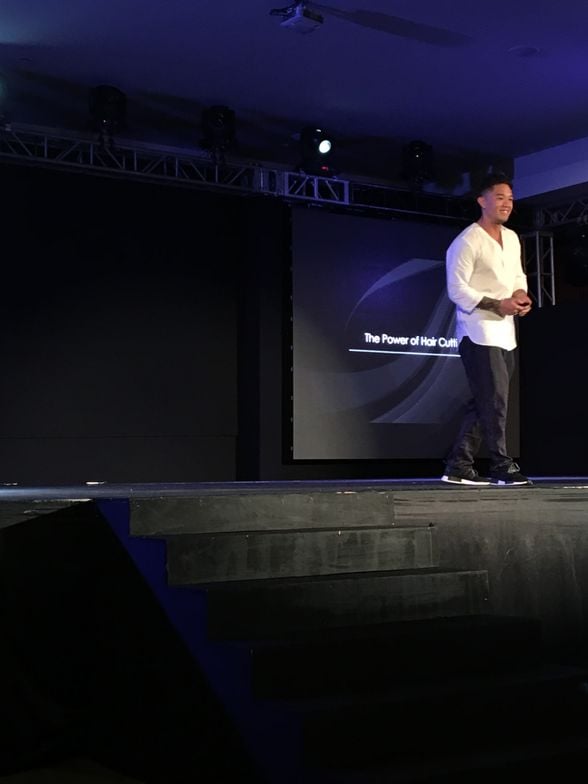 Mark Bustos tells the audience to discover their passion and how they can change the world for the better. 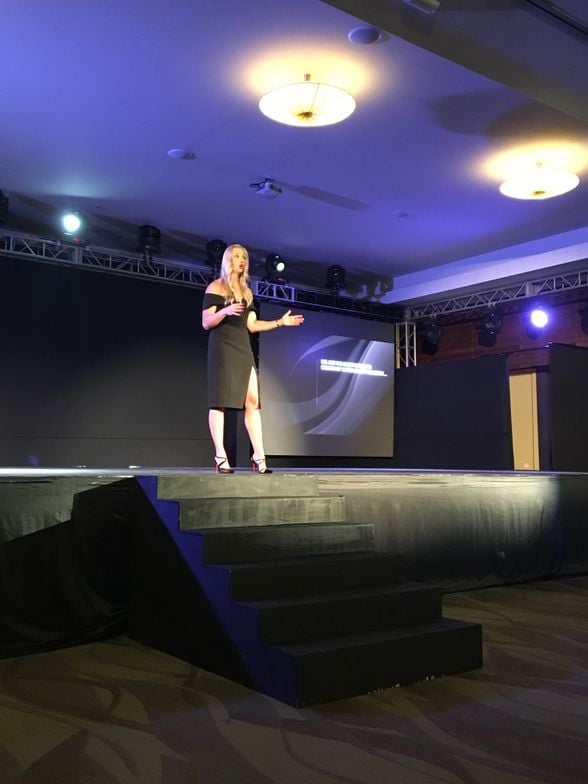 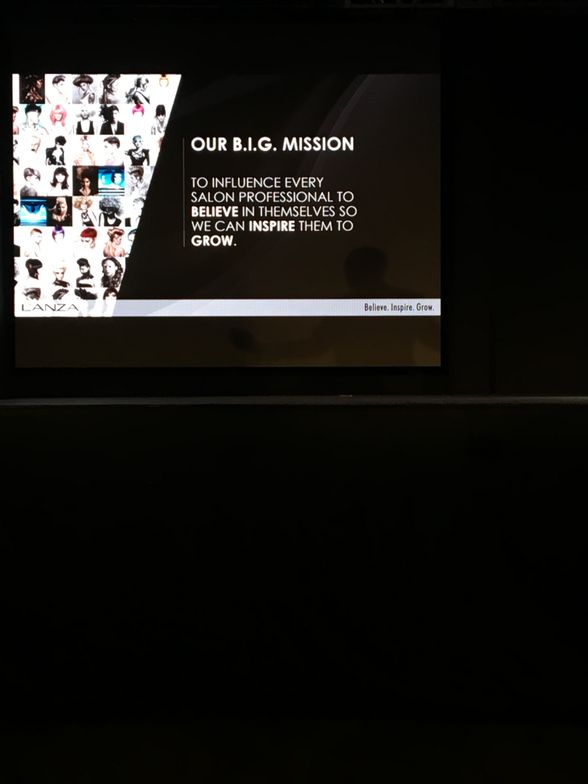 2/17
Slider
Freeman teaches easy, impactful and quick color techniques during the “Color Inside the Lines” class.Credit: David Webber for L'anza

3/17
Slider
The message of sustainability echoes during the “earth” segment of the B.I.G. Show. Credit: David Webber for L'anza.

8/17
Slider
MODERN editor Jamie Newman and Carver, who is holding the November issue of MODERN, with a cover image by Ammon Carver Studio.

9/17
Slider
Makeup Artist Lizette Zlogar with a model before the B.I.G. Show.

13/17
Slider
David Berglass addresses the audience at the start of day one.

15/17
Slider
Mark Bustos tells the audience to discover their passion and how they can change the world for the better.

B.I.G. stands for Believe. Inspire. Grow—three words the people behind L’anza Healing Haircare live by. But the brand’s B.I.G. Event November 5-8 in Montego Bay, Jamaica lived up to that word in more ways than one.

Almost 800 stylists, distributors and salespeople (788 to be exact) gathered for several days divided into business-specific celebration and motivation, and stylist inspiration and education, with each focus being joined by the B.I.G. Event and celebration on Sunday—a runway show put on by L’anza’s Creative Team and Design Team with a party that followed.

CEO David Berglass kicked off day one, Saturday in front of a room full of salespeople and distributors, beginning with a sentiment that was echoed throughout the four-day event, that no matter a person’s role involving the L’anza brand, together all of those people are L’anza.

“We’re all here to help you get to do what you want do,” he said.

After more than 11 years of L’anza events, the B.I.G. mission came about two years ago. Newly appointed VP of sales Brandie Huether asked the audience how they would create B.I.G. change, discovering what sort of catalyst they wanted to embody to affect positive change in the beauty industry.

Huether introduced stylist Mark Bustos, who continued this message. He challenged those in the audience to ask themselves “what have I done to improve the life of another human being?”

The New York City-based stylist is also the founder of the #BeAwesomeToSomebody campaign, providing haircuts to homeless people around the globe. Bustos said, “haircutting is a universal language.” This language can be spoken to everyone in the world, and the confidence it gives them can create magic.

This gift of confidence does not discriminate between those with money or not. Bustos splits his time between street cuts, haircuts in the New York City salon he works at, and more. His cuts range from $0 for homeless to $250, charging for his time for those clients who find a slot in his fully booked schedule at the salon. That explains one of his mantras: “expensive or free—never cheap.”

Bustos has cut hair for 18 years, starting in his garage as a boy, charging $3 per cut. He has worked at various salons in New York, usually for a couple years each. He explained this is all part of his success, in which he doesn’t settle and yearns to keep learning and growing.

“It’s important that we never consider ourselves a master,” he said. “Once we’ve given ourselves that title, then we’re basically just limiting personal growth. People think I’m crazy when I say this, but I always feel comfortable in second place; I never like being in first place. Once you’re in first place, you have nothing to chase anymore.

Bustos asked people to discover what it is that drives them and pushed them to provide positive change for themselves and the world around them through their trades and talents, or just being a nice person.

“Success is found at eye level—at human level,” he said.

The energy could be felt in the room after Bustos’ presentation. It was followed by the 2016 B.I.G. Sales Awards, rewarding top distributors and salespeople both nationally and internationally for the year.

The energy kept radiating thanks to the next presenter, performance coach Ben Newman. In addition to L’anza, Newman’s clients include top companies around the world, business executives, sales organizations and professional athletes in the NFL, PGA, NBA, MLB and NCAA.

Newman works with the L’anza team to motivate those in the office, on the creative team and more. He captivated the audience during his hour-long keynote about what drives him, asking the audience to realize what drives them, what their purpose is and what aspects of their work or life drag them down and need to be let go.

His lesson was for a business seminar, but attendees walked away from it feeling invigorated about life as a whole.

“It’s not how long you live; it’s how you choose to live your life,” he said.

Day two bid farewell to distributors and welcomed hundreds of stylists to Jamaica with the B.I.G. Show.

Check out an eight-minute version of the show put on by the L'anza Creative Team and Design Team:

"The whole concept of 'earth' is what’s happening in the planet right now," Swinney said. "It's asking how we can evoke change—small changes as a group collectively to make huge change overall globally. Just bringing awareness to certain elements that are around us that we use daily, and hopefully people will be a little bit more responsible.”

After conceptualizing this idea more than a year ago, almost right after the past B.I.G. Event in May 2015, months of prep went into this year's B.I.G. Show. Excluding practicing designs for the show on mannequins (what Freeman described as “the prep that went into the prep.”), eleven models were pre-prepped before traveling to the B.I.G. Event, and with a pit stop in Miami before flying to Jamaica, nine other models were prepped in a studio there. This included a total of between three and four days of both cuts and color.

On top of even the "prep that went into the prep,” everything done on stage, both for the show and in the classes on the following days of the B.I.G. Event, Freeman, Swinney and Carver practiced their designs in some form at the salon.

"If we’re not showcasing what we’re actually doing [at the salon], people see that; they can see straight through it," Freeman said. "That’s why whenever we offer techniques, whether it’s braiding or color or some type of finish, we always give the option of what it looks like editorially, but also how you can make it more commercial. So in color, for example, it’s changing the formulation. In braiding it could be just expanding the braid or making the braid larger. In a finish or blowdry it could be more smoothing. Whatever it is, it’s addressing the technique both commercially and editorially.”

Going non-stop at full-steam-ahead for days was no easy task. After distributors left Sunday, stylists were treated to hours of education with classes put on by the Creative Team and Design Team.

Carver said the teams strive to make sure that anything that goes on stage is new and exclusive and doesn't feel like anything the audience has seen before. Classes ranged from simplifying hair cuts using tips and tricks in creating timeless styles with Michael Dahl and Danny Felstead, to creating full-coverage color in under 30 minutes with Freeman and Bryan Campbell, to getting a glipse into New York Fashion Week with Carver and Swinney.

So with an intimate 800 members of the L'anza "tribe" in the audience, as opposed to the massive number of people that see the work done by Freeman, Carver and Swinney on other stages or shows or published, why is the B.I.G. Show so important? Put simply, Swinney said, "Without them, there's no us."

"When we do this, the whole purpose is to inspire those 800 people," he said.

“It doesn’t matter the size of the audience; if we believe in what we’re trying to do and what this brand stands for, then we need to bring it to that level," Carver added. "Whether it’s 40 people or 800 people or 3,000 people, they’re going to feel that energy and that impact and it’ll just kind of spread. It would be one thing if we were doing it because we were just trying to sell shampoo, but what we’re trying to create is this B.I.G. mission and create something much bigger than [just selling shampoo]. If we show up with less than our best performance, it’s going to create the opposite effect. We’re never going to reach our goal if we don’t show up 100%.”

Stay tuned for the dates of next year's B.I.G. Event in Cancun, Mexico.

Virox Technologies Inc. launches a new disinfectant for the professional nail care industry, with a one-minute claim against fungus.