“We shot in and around Los Angeles, in Pasadena, San Marino and downtown LA,” Santos says. “Hair played a big part in the film because it reflected the changes going on with Katherine Heigl’s character. She was written as the perfect character, almost to the point of being neurotic, but as she goes through her story, she changes and so does her hair.”

But before someone gets to the point of styling the stars, they have to progress along a path towards that end goal.  Santos shared his journey with MODERN.

How did you get your start?

Luke O’Connor (celebrity stylist and co-owner with his wife, Rona, of Lukaro Salon in Beverly Hills) has been my mentor since I was 17.  I contacted him to do an interview with him for my senior year high school career project.  He was so gracious but because he is such a busy, in-demand stylist, it was hard for us to set a date and time and we had to keep rescheduling.  Ultimately, because I couldn’t get any more extensions, he said, ‘Why don’t you come down to the set I’m working on’ which was a commercial shoot at Siren Studios in Hollywood.

I watched him to do hair on set. His signature last move is to flip his model over and run his hands through her hair. Watching him work, interviewing him, was my moment of clarity. From that moment on, I knew I wanted to follow in his footsteps. I wanted to do TV and film, just like him.

Luke said I could come into his salon anytime and I took full advantage.  During the school year, I was there on weekends and during the summer, I was there Wednesday, Thursday, Friday and Saturday.  Eventually, I got my license and was working a few jobs, making it all work, and I got in as an assistant.

What was your first on-set job?

A friend of Luke’s was putting together a crew for a show on Fox Sports.  She was overseeing hair and makeup.  Luke said this would be a great way to earn enough hours to be able to join the union.  I was still in the salon.  I could still be at the salon and would work seven days straight sometimes. I spent five years working on different shows there.  That was my start.

How did you come to work on “Unforgettable” ?

It would not have happened without Leslie Bennett who oversaw the department as a whole.  She brought me on and she was so wonderful.   Leslie took care of Rosario and I took care of Katherine Heigel and Geoff and Isabella Rice who was our very- young actress.

It was just the two of us but on super-busy days we would book another stylist to work with us.

What is the process of getting hairstyles approved by the director?

Well, first you read the script, of course, and that helps you pick out the points where you may need a more formal updo or a where you’ll want a messier, more emotional look. A week before we started filming, we had two days of test shoots where the actors and their stand-ins come in and we worked on their hair.  Then you take those looks to the director and get their approval.

What is a typical day on-set for you?

We started very early at around 4:12am. (On set, they go in intervals of six which is military time.) We show up when it’s still very dark. We usually had an hour and forty two minutes to work with Katherine who has an amazing amount of hair.

She has naturally wavy hair and so the first thing every morning, we had to flat iron and get a solid straight base. It was important to take the time to get this perfect and then everything else can be taken care of onset.  A favorite tool was a rechargeable flatiron and also this little baby hot comb for her baby fine hairs. It is a genius product and I lost it. It saved my life every single day.

When we get to set, they will call ‘Final looks’ and then you stay nearby to do touchups, as needed, in between takes.

How about some other fave tools or products?

Living Proof saved my life and I used a lot of their products all day, every day.  Katherine’s hair was lightened to nearly white and we had to be very careful with temperature and make sure to protect the hair and not compromise it.

On the male lead, Geoff, I used product from a men’s line of grooming products I developed called Incognito Grooming. I used a texture crème called Diligent.  He has very fine hair and it creates texture and movement and gives body and bounce to the hair.  I cut his hair about twice a week to maintain continuity. 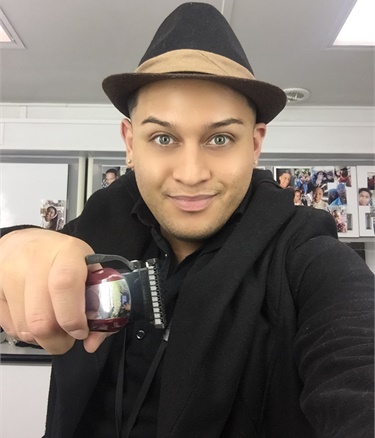