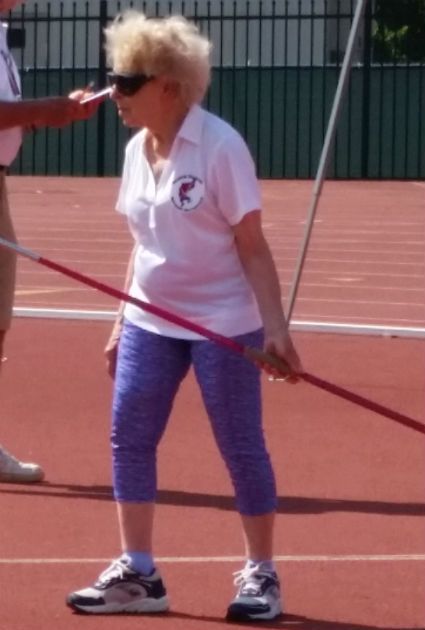 When Healthy Hairdresser caught up with Ann McGowan—and by “caught up” we mean literally had to run to catch up—she was throwing her javelin in the National Senior Olympic Games in Birmingham, Alabama. At 93, McGowan is among the “Great Eight” senior athletes who have participated in every bi-annual Senior Olympics event since its inception in 1987. At this year’s 30th anniversary event in June, McGowan and the seven others were honored at a special ceremony. She competes in track and field; in the past she also competed in the team sports of softball and volleyball.

While she’s proud of her many medals and other athletic accomplishments, McGowan also is a hairdresser through and through. A lifelong resident of Providence, Rhode Island, McGowan owned a salon there for many years, taught cosmetology and did hair at a local nursing facility. Her two passions—sports and beauty—have much in common, she says.

“It all takes perseverance,” explains McGowan, who was just five years old when her mother died. As a kid, McGowan played hardball baseball with the boys whenever they were so short of players that they’d allow the girls to join in. When she was a teen, she played as many sports as her high school permitted at a time when girls were not encouraged to be athletes. Later, she and her husband led their children in all of the typical family activities like skiing, ice skating and roller skating.

Perseverance came into play again when McGowan wanted to do hair professionally. She worked in her aunt’s salon when she was very young and regularly styled hair for friends and family, but instead of finishing high school she took a different job to earn money and then married young and had her kids. Once the family routine was settled, her husband Bill suggested his wife pursue the career she’d always wanted, so first she got her high school GED, attending night classes while her husband stayed with the children and then switching to days when the kids went to school. She wanted to teach hairdressing, so next she went to college for the required certification. Soon she was teaching in, and also managing, a cosmetology school.

When she was 49 and her husband died, her teaching job kept her busy and financially secure. As a teacher, McGowan’s low-key approach earned her the nickname of “Miss Ann, No Problem.” She taught students that nothing in hairdressing was so terrible that it couldn’t be fixed. One day when she had to leave the student salon to run an errand, she returned to find one student missing. The other students reported that he’d left because he felt so bad about making a mistake on a client’s hair. He’d lost the guideline and didn’t know what to do.

“This helped me teach students that hairdressing is just problem-solving,” McGowan says. “I showed the students how to do a corrective haircut on that client, which gave her a new look and she loved it!”

In 1981, McGowan bought a salon and ran the business successfully for 10 years. “People came from all over the state to my salon,” she recalls. Through the years, McGowan saw a lot of hairstyles come and go describes the many advances in technology. She remembers:

McGowan finds hair color fascinating and enjoyed doing the frosted-hair looks of the 1960s-70s. As her favorite haircut, she names the Dorothy Hamill wedge.

“The Dorothy Hamill cut was so popular that we could barely keep up with the demand!” McGowan recalls. “I specialized in that cut, and one time when my daughter came home from law school for the weekend I gave her a Dorothy Hamill cut. It was a severe change, because her hair had been long, but she looked stunning in it. When she returned to school with the new look, her classmates loved it and wanted to know who her hairdresser was.”

McGowan’s hardy spirit helped her face a diagnosis of breast cancer when she was in her 60s. “At the time, I was running a hairdressing school, teaching and also working at a nursing home,” she remembers. “I was alone in the nursing home’s salon when a light bulb went on in my mind. I knew I had a lump in my breast, so I called my doctor.” The doctor confirmed what McGowan suspected—that her lump was malignant—and she had a mastectomy soon after her diagnosis.

“I told my physician I would have the operation at that time only if he promised I’d be well enough to go to my athletic events four months later,” she remembers. “He promised, and I went and did well because I had determination and didn’t want to miss my sporting events. That’s perseverance!”

Other than that challenge, McGowan’s health has been good. “I have seen many of my friends have to give up doing hair,” she says. “For some, it happened early when they found out they were allergic to the chemicals. Others have trouble standing all day, but that was never hard for me. Then during World War II, women started smoking. Everyone was stressed out during the war, so women were advised to go home, have a cup of coffee and smoke a cigarette! We had ashtrays in the salon for our clients, and the hairdressers smoked, too.”

McGowan’s long career has given her insight into what it takes to be a successful hairdresser. She encourages young stylists to work hard and not worry too much about the money. She had other advice as well:

McGowan still styles and “tints” her own hair and, with an upcoming sporting event to always look forward to, she says she simply enjoys life. “I laugh not to be silly, but because I’m thinking of funny situations and talking about them” she says. “There’s always comedy in life.” She doesn’t plan on making any changes.

“People ask when I’m going to retire,” she reports. “My answer is, ‘The time I retire is when I go to bed and don’t get up.' Even at my age, I feel that life is too short.”