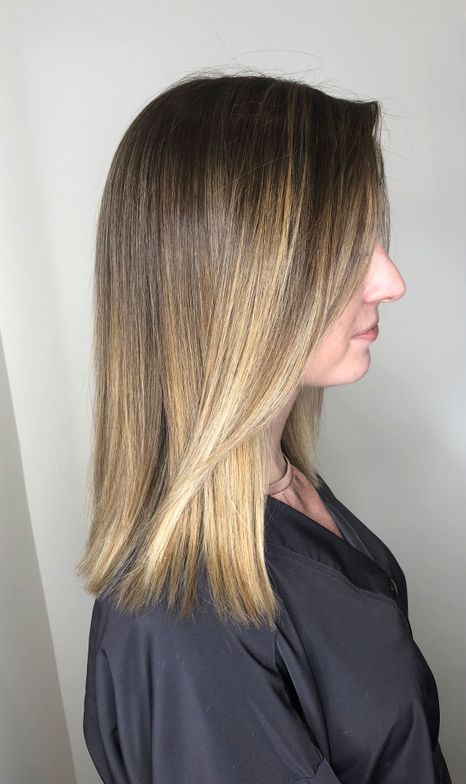 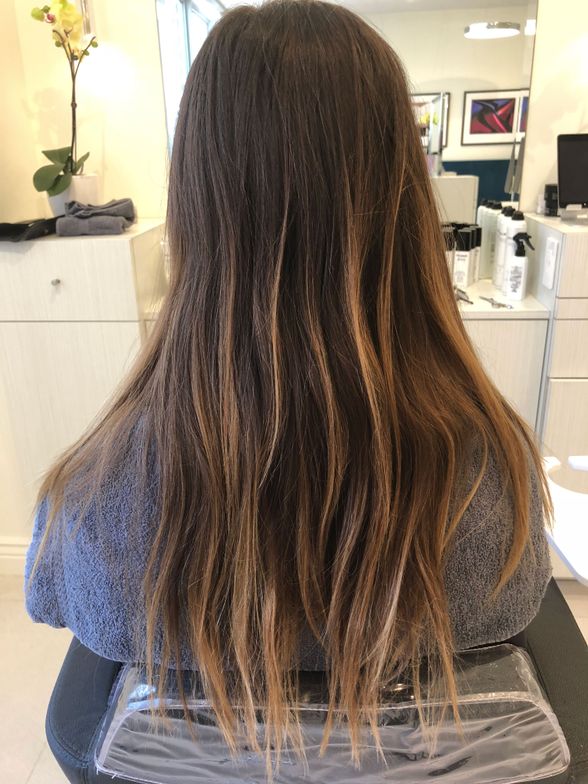 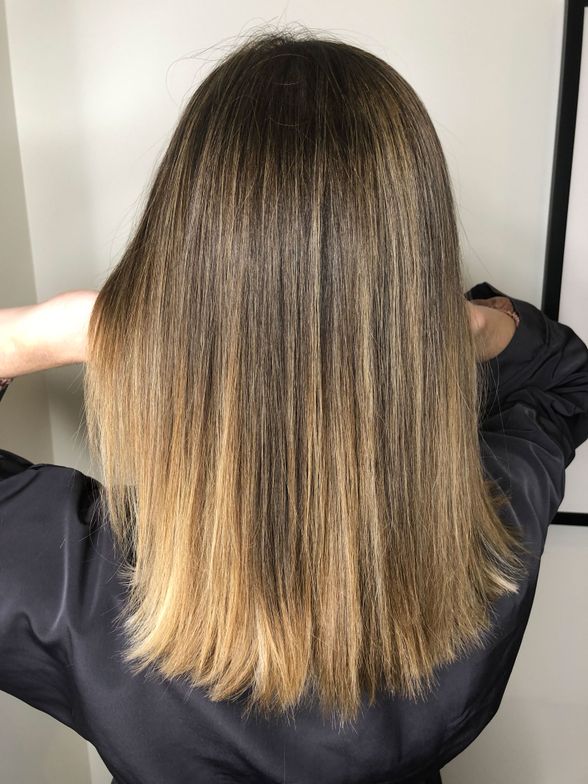 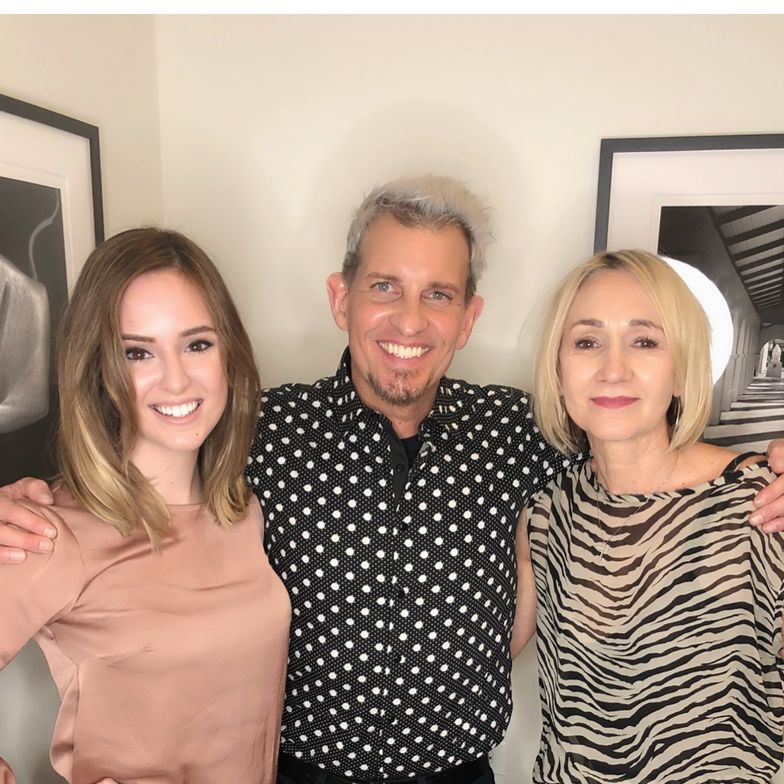 When I visited Platinum 34 salon in Chicago's famous Gold Coast, I needed major hair-apy. Despite having spent the past 1.5 years in sunny Los Angeles, I was far from a California blonde. My highlights had turned brassy and grown out to create a stark contrast between my ends and the rest of my hair.

I wanted hair that was lighter for the summer months and felt (and looked) healthy and hydrated. Naturally, my hair is a darker brunette. I colored my hair for the first time when I was 23, and I've been wary of highlights because they typically turn brassy quickly. I was apprehensive to lighten my hair again and was convinced the color of my natural hair simply made the idea of nonbrassy highlights impossible.

Thankfully, I was in the hands of a color master, George C. Long. His outgoing personality and confidence reassured me that being blonder for summer was a real possibility. He told me my hair was able to lighten to the level I desired and wouldn't turn brassy with proper technique and maintenance.

After a five-hour transformation, my hair looked drastically different; I feel like a completely new and better person. As a beauty editor, I wanted a chic cut and color that felt effortless and healthy. My color continues to brighten with each wash, and it looks natural and sophisticated. The best part: it hasn't turned brassy, just as Long promised.

"When you're doing color corrections, it's complicated to find that one technique or formula that will work for everyone because it varies," Long says. "You just go into hairdresser mode and do what you need to do to make the correction happen. Every color correction is a different animal, and you need to address each individually."

Still, Long says the basic techniques and formulas he applied for my color correction can be implemented on a variety of clients. To recreate the color, follow these steps below from Long:

Step 1:  Babylight the entire head with Formula A, weaving out sections throughout.

Step 2: Take the remaining sessions that were intentionally left out of Step 1, and backcomb them. Freehand paint from the mid-lengths to the ends (also called tipping out) using Formula B to remove any orange brassiness. Process the entire head to a level 10 pale blonde.

Step 4: Shadow the root area by applying Formula C, and comb 3 inches down from the root.

Step 5: Directly after step 3 without rinsing, apply Formula D to the remaining mid-shaft to ends, and process all for 15 minutes.

A Chicago native, Long has been cutting and coloring hair for more than 30 years. His education began at the Vidal Sassoon Academy in London before he moved to New York and trained at the Elite Dada Academy. Long returned to Chicago where he opened Platinum 34, his first salon, with his longtime friend and coworker (and the star behind my perfect hair cut), Dianne Peteresen. (See Salon Today's tour of the salon here.)

The key to achieving this blonde lies in the right techniques paired with good placement, so color melts into a low-maintenance, beautiful blonde finish.

Can you get brilliant color, restored strength and dazzling shine in a demi-permanent? The answer is now yes, thanks to the new COLOR.ME Gloss demi-permanent from Kevin Murphy. It comes in 30 shades and contains the unique KM.BOND², an advanced plant origin protein complex that creates new hair bonds inside the hair. See if this is the demi you’ve been dreaming of.

As a color pro, you’re always on the lookout for ways to upgrade your blondes. Schwarzkopf Professional® is ready to assist with two new blonde how-tos, featuring formulas and step-by-steps, both feature the upgraded IGORA ROYAL® Highlifts which create clean, clear, healthy results on warm and cool tones.

Why This Stylist Changed Her Color Line and Never Looked Back

Change is hard and scary, and changing your color line is one of the hardest and scariest things you can do as a stylist. L.A. color and extension expert Abigail Bazzoli knew it wouldn’t be easy, but she was ready to kickstart her creativity and try something new. In a recent conversation, she shared the hows and whys of changing out her line and embracing Schwarzkopf Professional® IGORA VIBRANCE® hair color.

We put together some of the most brilliant blends for your viewing enjoyment (and ours), plus recommended products to keep your colorful hues at their most eye-popping and scroll-stopping. Enjoy!

Color Formulas: How to Use Colormelting to Create Gorgeous Blondes

The new silver shade of color-depositing shampoo and conditioner launched by Celeb Luxury is called Viral Graphite, and you can look for it to be available on Sept. 1.

When Moroccanoil made its first appearance a decade ago, it revolutionized the beauty industry with a standalone product — the magical, heavenly-scented Moroccanoil treatment. The brand is once again disrupting the scene with the announcement of the Moroccanoil Professional Haircolor Collection, a full line of permanent and demi-permanent haircolor and lighteners.

Color Formulas: 4 Autumnal Reds and Pinks to Get Excited About

Are you and your clients starting to gather ideas for stylish fall hair colors? Check out these four reds and pinks to get your gears turning.

Matrix's latest innovation contains pre-measured color and developer in every pouch for precise dosing and portability. It allows stylists to cover 100% of grays in half the time.