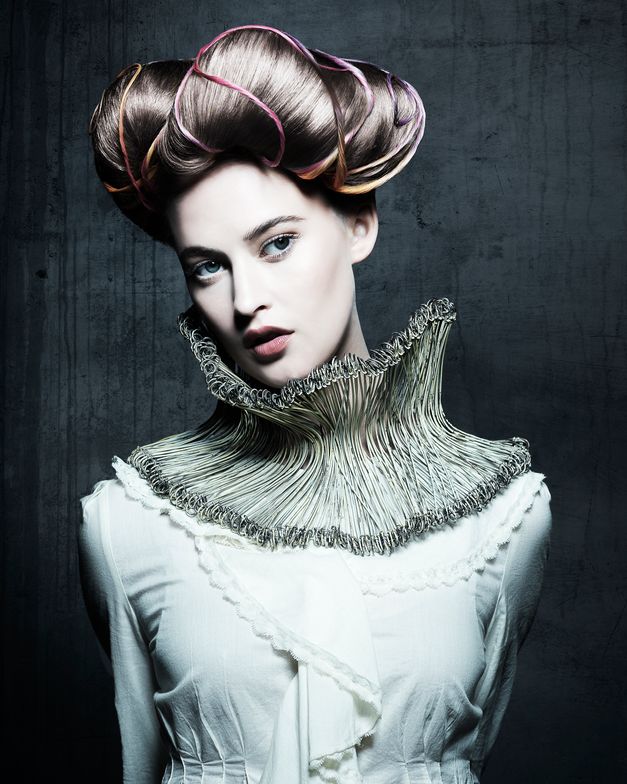 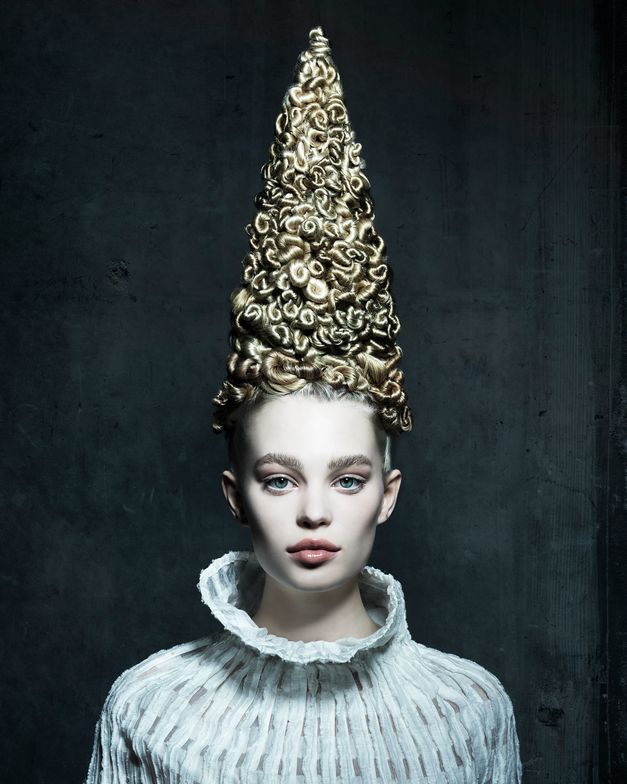 “This took me two months to complete. But I had spent so much time on the cone piece that I hadn’t actually tried attaching it to the mannequin head until days before.  The piece was not blending with the mannequin hair…” 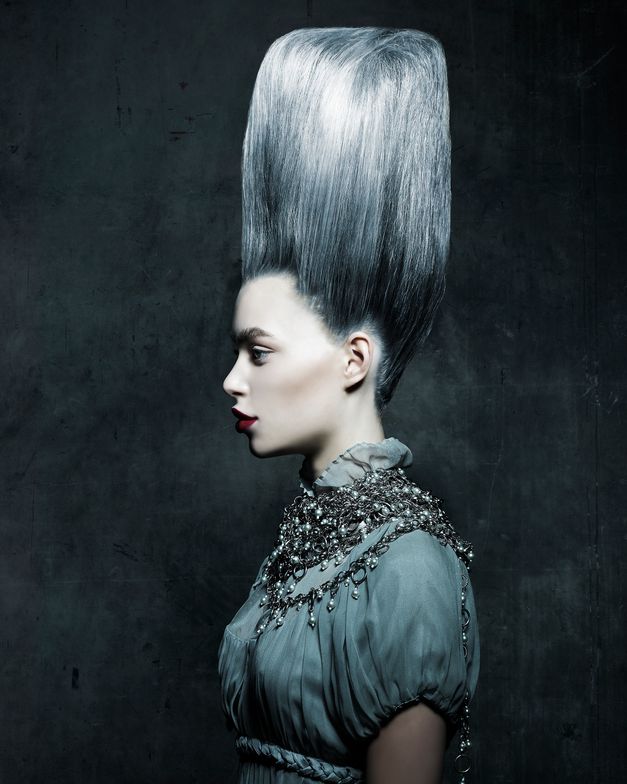 “My assistant suggested we put a Venti Starbucks cup in the middle for more stability with the wool I was using as padding… it worked!”

“This took me two months to complete. But I had spent so much time on the cone piece that I hadn’t actually tried attaching it to the mannequin head until days before.  The piece was not blending with the mannequin hair…”

“My assistant suggested we put a Venti Starbucks cup in the middle for more stability with the wool I was using as padding… it worked!”

Every year at the North American Hairstyling Awards (NAHA), talented beauty artists from all over North America gather to support each other and their industry.  Finalists in different categories of excellence –Hair Color, Makeup, Haircutting, Master Stylist—walked the red carpet and then celebrated an event that many call ‘The Oscars of Hairdressing.’

Also in the audience was Julia Clayton (@jujuwiththegoodhair), a young stylist at Planet Salon in Los Angeles, who specializes in precision cutting, extensions, and styling. Clayton had entered, for her first time, in the Avante Garde category. Her submission is lovely, well- conceived, and with a strong point-of-view. While she was not named a finalist, we thought her experience of being a first timer, doing really strong work, offered an opportunity to get into the mind of a competition newbie—and one with great promise.  Meet Julia Clayton:

Beauty Background:  'I graduated from the Aveda Institute  in 2013. One reason I had chosen to attend Aveda was they had an opportunity to attend New York Fashion Week (if you entered a competition), and  have your own photoshoot where we had a model, designed the hair, did the makeup, and had a professional photographer shoot it (sound familiar?). I had one best overall image at my school and ended the year knowing I would be heading to New York, chosen as a stylist on the Aveda team, that September. From these two experiences, a fire was born in me to create.  Once I learned in school about NAHA, I soon realized it was the Bentley of competitions to enter.

'I’ve never considered myself competitive with other people, but more so one who willingly challenges myself, especially when it comes to a creative process.  I’ve been fortunate enough to work alongside Ginger Boyle, who has invested and believed in me as an artist. She has over 40 years of experience and was always there with a cool trick up her sleeve that would help me make one of my ideas a reality.  One of my biggest take-aways from this experience, was recognizing I was weaker as an individual, and stronger as a teammate. Doing a shoot like this requires months of preparation, hours trying ideas and failing at them, research, money, and a lot of faith.'

Your theme: 'I chose to name my images “The Royals.” I have been inspired by Tim Burton and movies such as “Snow White and the Huntsman” and “Marie Antoinette.”  I wanted the viewer to see these women and think they were ethereal queens from another world; a little dark and twisted.  I also wanted to challenge myself to use real hair and not materials to look like hair.'

Your shoot: 'Some of my looks were more challenging than others, and time management was pertinent to the success of each one.  For example, my image with the cone shape coming off the model’s head took me two months to complete. But I had spent so much time on the cone piece that I hadn’t actually tried attaching it to the mannequin head until days before.  The piece was not blending with the mannequin hair. I tried multiple techniques and it just did not look right. It was not until Ginger came over and suggested I sew the piece to the hair below. Eureka! I had never done that, but here I was trying something completely new and it worked.

'Another example is the day of my shoot a look I had practiced the most putting up (the tall rectangular one), kept falling on the actual model. I had limited time to get this look done, as I had my team waiting to dress, do make up touch ups, put on wardrobe, and shoot. Talk about pressure!  After multiple attempts, I asked my assistants to let down the hair and for me to take a step back. I felt my emotions get the best of me and realized I needed to take a deep breath and slow down. My assistant suggested we put a Venti Starbucks cup in the middle for more stability with the wool I was using as padding… it worked!'

What you learned: 'This is where the real value of entering this competition lies.  It teaches you new skills, discipline, time management, and emotional skills.  It breaks you down and builds you back up as an artist. It reminds you how important it is to be open and how few tasks are accomplished alone.'

What you’ll do differently: 'This year I will leave even more time for prepping. I will practice on a model multiple times before doing the actual shoot. I will continue to confide in my mentors, while remaining steadfast in my ideas.  I will continue to believe in my abilities as an artist and keep trying till I get nominated or win. And no matter what, I’ll keep in mind that it’s so much more than a competition with other people, it’s one with myself.'

Shout outs: 'I couldn’t have done this without my photographer, mentor, makeup artist, colorist, wardrobe stylist, and assistant:

Working to Overcome the Racial Divide in the Industry

"It’s about texture… and texture doesn’t have a race." In the days following the killing of George Floyd in Minneapolis, the despair being shared by so many also served to propel Rodrick Samuels, a barber, educator, and owner, into action.

GoodBody Salon Creates an Oasis for Women of Color

Celebrating its one-year anniversary, this Oakland salon is reinventing the haircare experience for women with deeply textured hair.

2021 was a banner year for Nieves Almaraz: He won NAHA’s Men’s Hairstylist of the Year and opened How to Fade Hair Barbering School Inc. We spoke to him to find out about his accomplishments.

Jamie Dana — hair educator and speaker at MODERN's upcoming Independent Bootcamp — takes us through a day in her life, showing how she creates balance between work and other parts of her life.

Artist, educator and salon owner Marco Pelusi takes us along for a day in his life.

Stylist and CEO of All Dolled Up Amber Marie walks us through a day in her life.

Hairstylist and Artist Connective Member Sydney Lopez walks us through a day in her life.