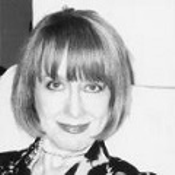 Helen Oppenheim, hair guru, has been Creative/PR Director for Vidal Sassoon US/Canadian Salons (1979-1981) and for La Coupe Salons (on and off for 14 trend-setting years like no other) …""Ambassadress"" for John Sahag and his Workshop for a total of 4 years … She has been US Correspondent for Spain's Peluquerias Magazine for decades, and freelanced for many of the world's hair magazines, including Modern Salon … Judging duties include Global Salon Business Awards in 2008, NAHA in 2015. She photographs backstage at NY Fashion Weeks and Museums.

It is amazing to me how many people "Share" not just my photos but those of others in this rush to fill your pages with constant content. Willy nilly.

On the Runway: Lace Hair by Peter Gray

The great Peter Gray created a lace design on black, bobbed wigs for Betsey Johnson during NYFW. See the process in photos.

Hair Ideas at NYFW Over the Years and Into the Future

Get inspired with back views of interesting hair photographed backstage by me at NY Fashion Weeks over the years.

Do Something New and Original: Let Art Inspire You

I have always been into art. The movies. Events. And whatever is happening in the world. These have inspired the hair and photos in my collections...

It's Time For Some Changes

I am into Ideas, Inspiration, Information. As you may know. I have found out there are many different types of hairdressers, and, eventually I hope to speak to you all. I have worked with most over my career. And know many want, well, more of more. Do you?

Ideas inspiration and information is what you will find on my blogs, starting today.