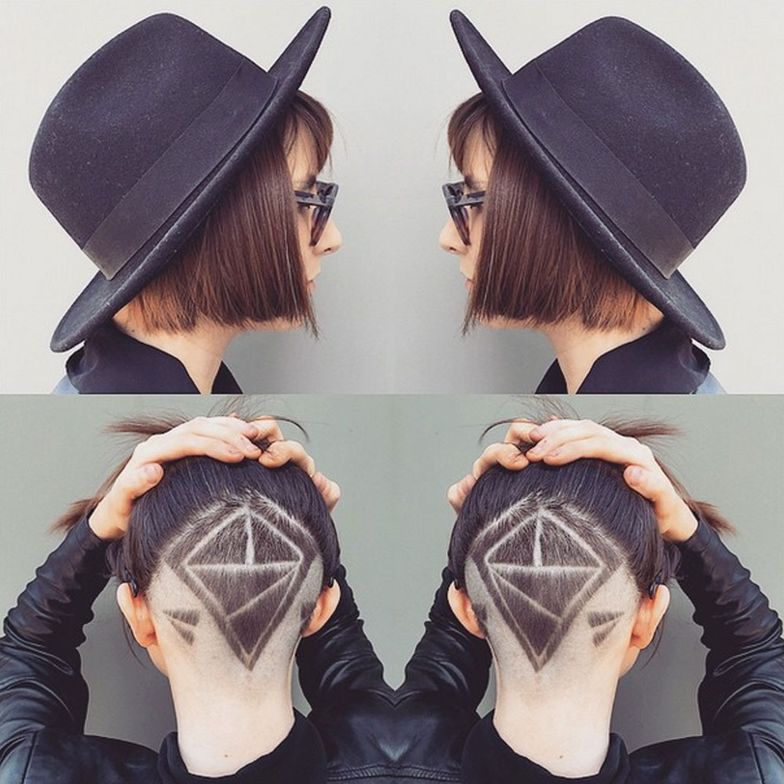 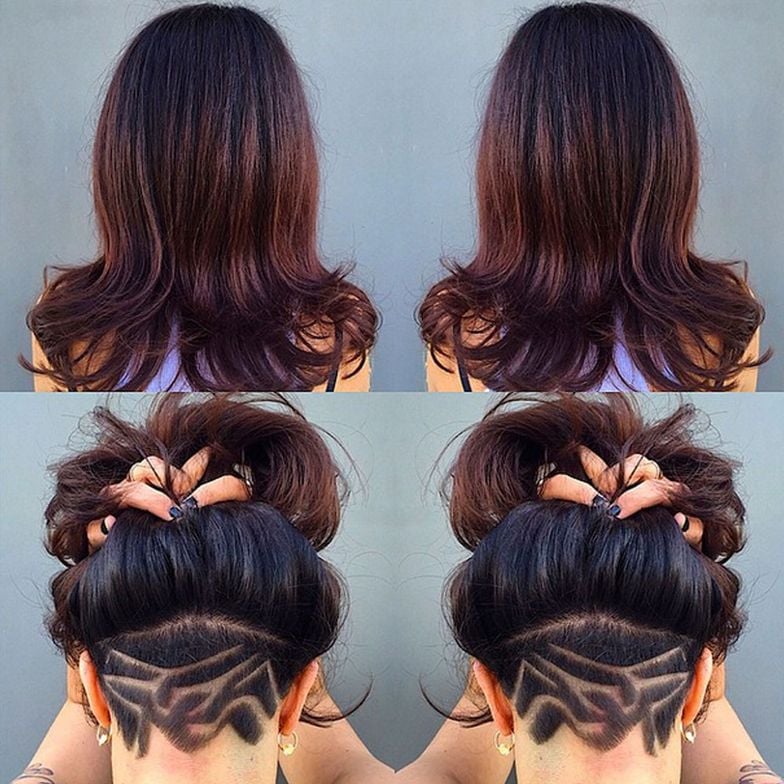 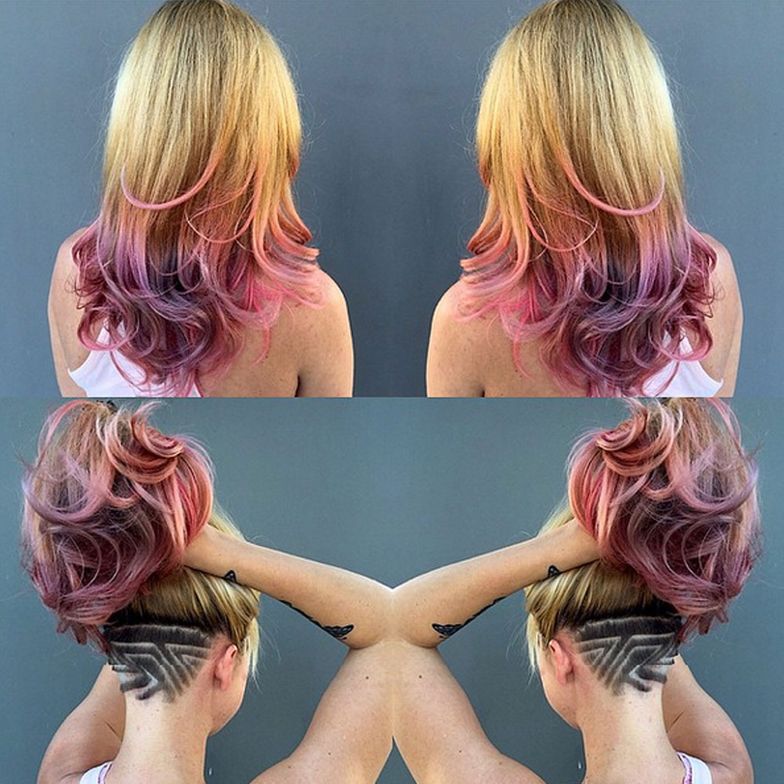 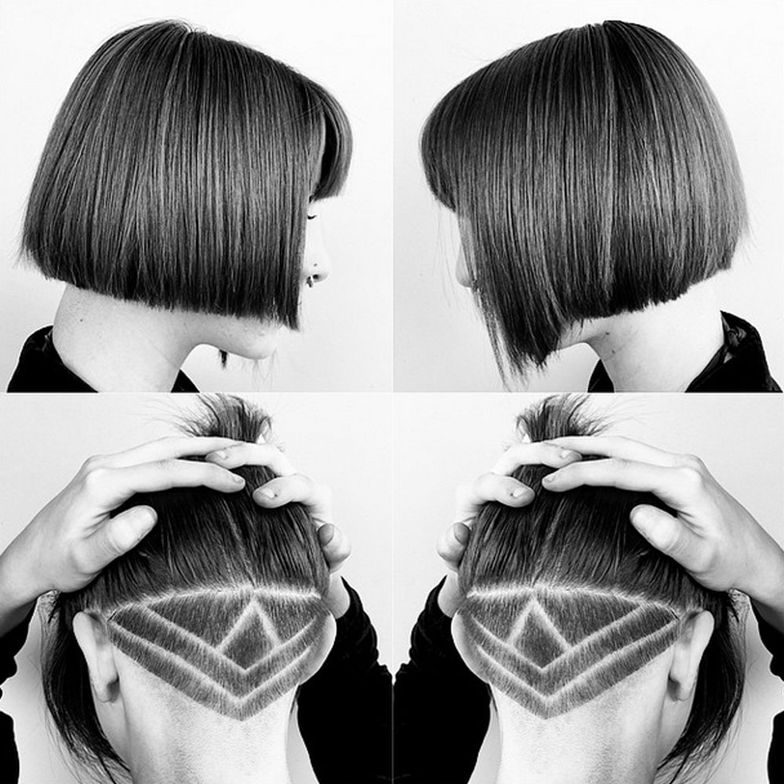 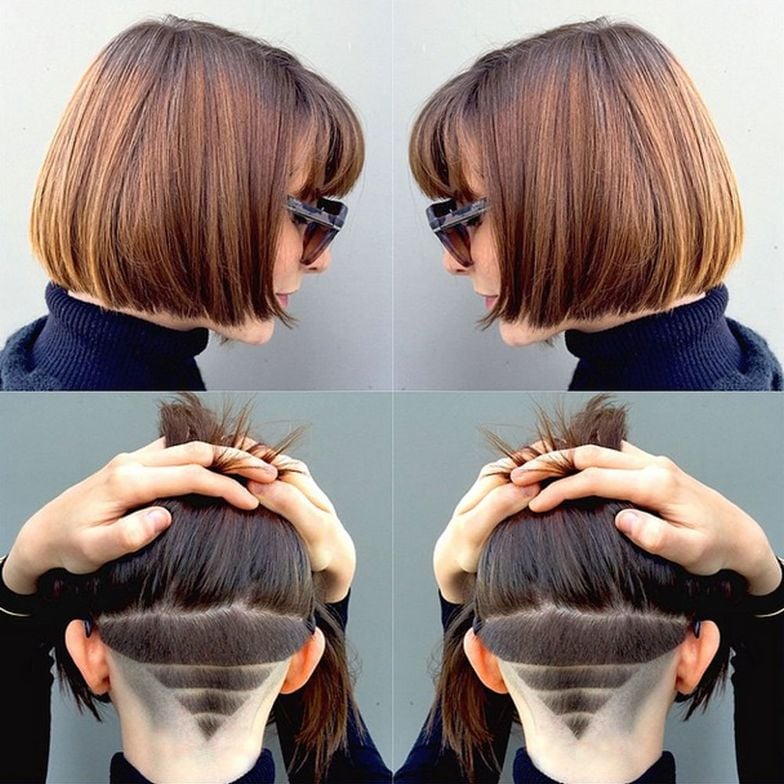 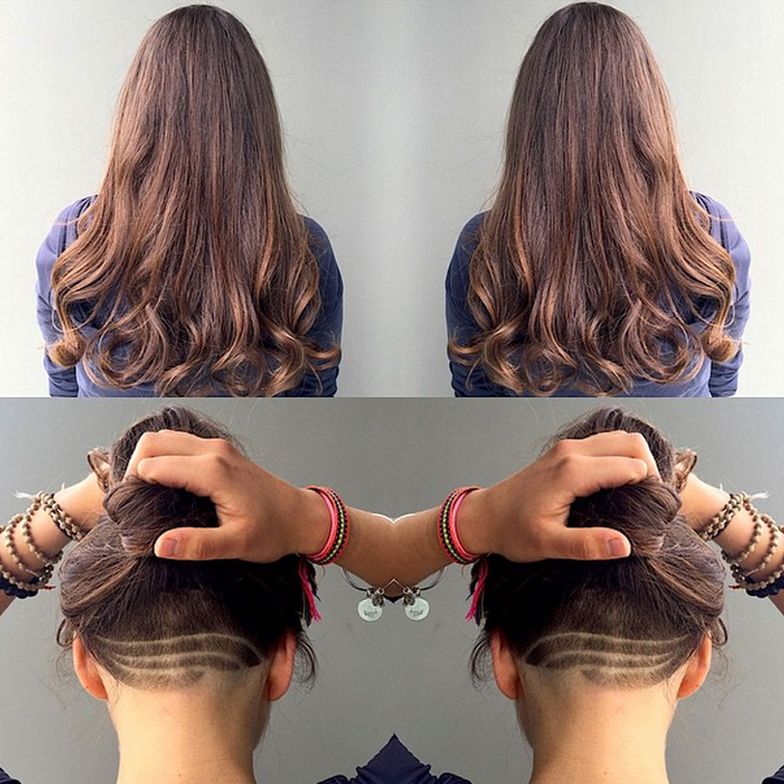 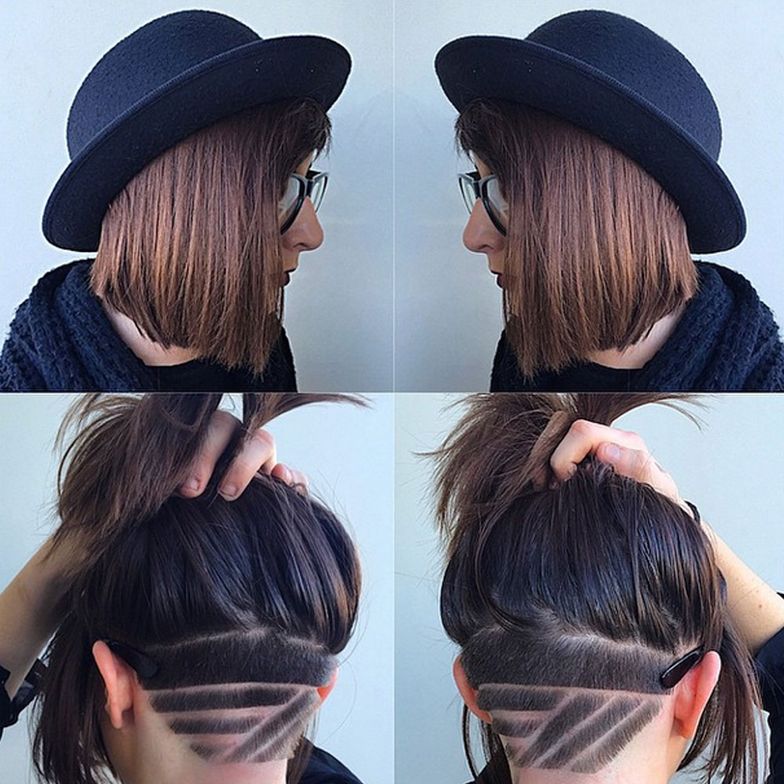 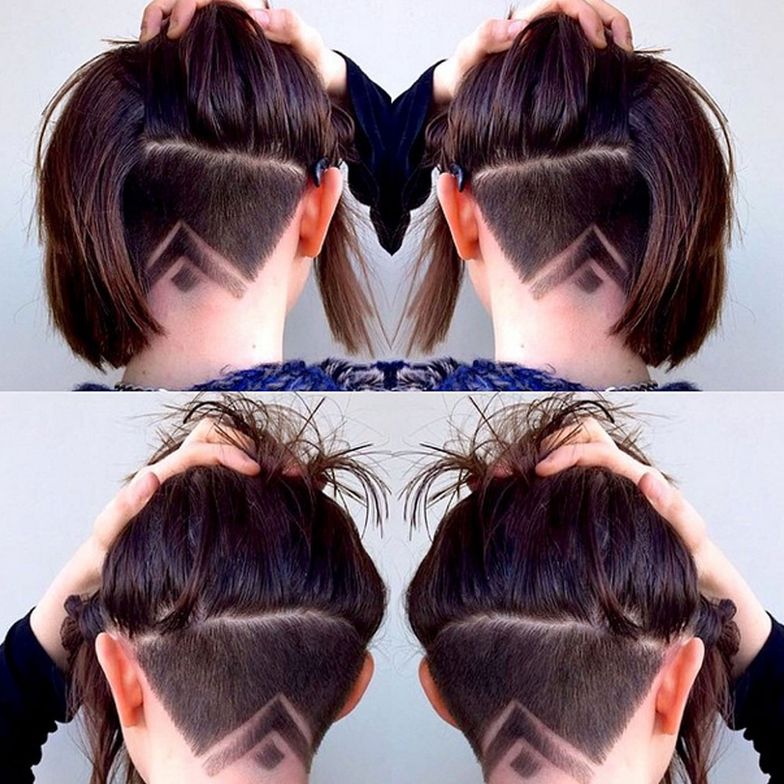 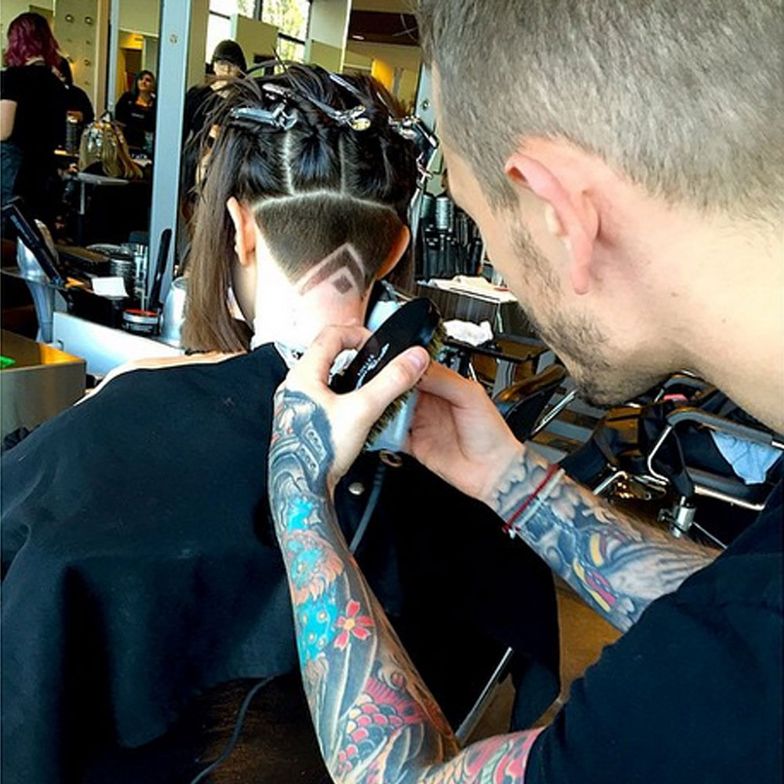 Spanakos pulls the hair up in four sections instead of two, preventing tension that could cause the line from ear to ear to not be straight. 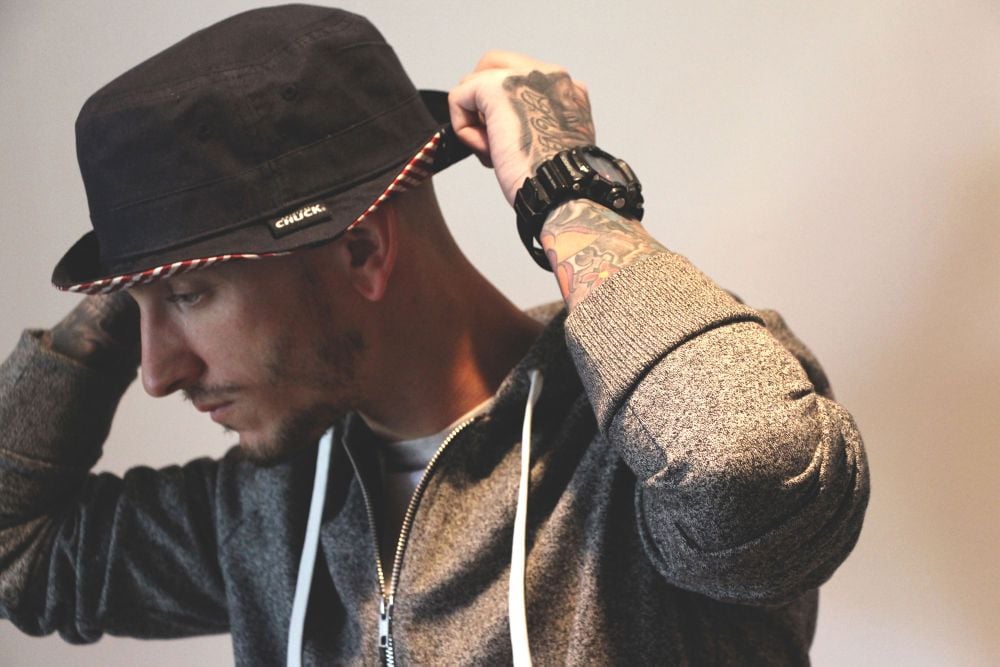 9/10
Slider
Spanakos pulls the hair up in four sections instead of two, preventing tension that could cause the line from ear to ear to not be straight.

When Johnny Spanakos, a student at Paul Mitchell the School in Costa Mesa, California, first created a hidden undercut, he never predicted the response it would get.

“What happened was, I had a girl come in who already had that style of haircut, it was just very grown out and messy,” said Spanakos. “So I shaved the sides of her head and then put a line in it, symmetrically on both sides, which met in a point in the back. Before I knew it, that cut was all over Instagram. I woke up the next day with like 10,000 followers just from that picture.”

Take one look at Spanakos’ Instagram and you’ll find a variety of styles on men and women, all with great attention to technique and precision, executed by a creative eye.

“I had never seen this type of undercut style until I moved out to California,” said the native New Yorker. “The first time I ever saw that was from a teacher at my school who’s very popular on Instagram as Fern the Barber. He did a very straight-lined, triangular bob-type haircut on a girl and it sat very close to her head. When it was straightened, it sat literally right against her head. It was so perfect it looked like it was glued to her head and I asked him how he did it. He took his comb and lifted up her hair and it was just bald. That just blew my mind. From a styling standpoint for longer hair, I realized that it probably made the hair lighter, it’s super easy to style, it’s never really going to frizz when you cut that much bulk out.”

For a signature cut that’s gaining such recognition for Spanakos, he remains a little reluctant each time it’s requested.

“As awesome as it is to create these unique styles and see the response that it gets on the internet,” says Spanakos, “other people ask you to do a lob or a bob or a graduated haircut and they look at you like they’re a little nervous. But a girl who sits down and says, ‘I want you to shave half of my head,’ has full confidence that I’m going to do a good job. It’s so weird because it really is completely contrary to the cutting that I do want to get good at. With hair and any kind of trendy industry, you have to go with what’s popular and what’s hot right now.”

Despite this reluctance, Spanakos expresses nothing but gratitude for the recognition and praise he has received and for the girls that have sat in his chair and “trusted [him] with the backs of their heads.” His success not only demonstrates the power of social media to attract attention to a stylist’s talent, but also the need to accept whatever recognition is received and use that momentum to reach the ultimate goal. Plus, it’s always practical and lucrative to have a specialty service up your sleeve.

“It’s actually super marketable,” says Spanakos on his hidden undercuts. “I don’t need a business card. Every time she pulls her hair up, somebody’s going to say, ‘Who did that?’ It’s a specialty cut so if you look at it from a business standpoint, I have a great sales pitch for getting hired. If somebody who does extensions goes into a salon that doesn’t have an extensions expert, they’re going to hire that person. So for me, I can go in and offer the client any kind of color service or blowout, plus a specialty cut that’s very unique and custom to them.”

Plus, Spanakos recognizes why this is a practical cut for a client. Despite its extreme look, the undercut etching is hidden whenever hair is left down. It allows for the client to choose between long, girly hair or an edgy, eye-opening style when the hair is tied up.

“It also gives a girl an excuse to go to the barber shop or the salon every couple weeks as opposed to every couple months,” says Spanakos. “You figure that even a girl with beautiful, healthy hair only gets it cut maybe four times a year. A girl with an undercut can still have beautiful color done, awesome treatments on her hair protein-wise, get big beautiful blowouts and straighten it, but she’s also revisiting a stylist every couple weeks, a picture’s getting put on the internet, and she has something fun and new to show everybody. So it really is practical.”

Hidden undercuts are no exception to the golden rule: the consultation is key. Spanakos admits that he’s had terrible luck trying to really plan out a design from the beginning, but instead starts with a line that complements the head shape. To get a sense of where to go from there, he takes the time to learn about his client first. Investigative questions like how she wears her makeup on a daily basis, what clothes she wears predominantly, what kind of places she goes, and what kind of music she listens to are all important to determining what type of design will suite her lifestyle.

“With Instagram and the way things have happened for me lately, for some reason I feel an enormous amount of pressure to get better very quickly,” says Spanakos. “And I’ve just been super lucky. A lot of times I’m doing those designs on people, halfway through I’m thinking about how I can break the news to this person that I’ve ruined the back of their hair. And then I just continue doing it and a line connects to another line and it ends up being something pretty cool.”

The most important tip Spanakos has to offer is on how to make the line of the undercut straight.

“Times I’ve seen undercuts go bad is when the line from ear to ear is crooked. When you pick up the top section of hair and pull it tight, with a lot of tension on the skin, the line may look straight, but when you let go of it and release that tension, that line could be really wonky. So what I do is take a rattail comb, I split that into two sections like most stylists would, but instead of tying those two up in two sections and tugging on the skin, I split those two into two more, and I have four little sections across the back of the head. So there’s virtually no tension on the skin and that line is as straight as it’s going to be when I let the clips out.”

Oster Fast Feed – “That’s what I usually use to set in my length, so whether it’s a 2 or a 3 or whatever, that takes care of the bulk of the hair. When a girl comes in and I’m creating the undercut for the first time, I usually go in with a naked guard, I don’t have anything on it, I zero-lock the blade, and I just free hand cut all her hair off.”

Andis Master – “Then I go in with this for a little bit more precision, and I’ll put a 1 or 1 ½ guard on it and that’s what I’ll use to clean it up and set my final length. Depending on how thick their hair is, I’ll take my Andis Master, I’ll close it out all the way and I’ll kind of ghost a line that I’m thinking of. This allows me to make an indent in the hair and if I’m not really seeing it as clear as I’d like to, I can just take the hair a tiny bit shorter and start over. So it gives you a couple passes if you do it with your clipper instead of the actual outliner.”

Andis T-Outliner – “For going in and creating the design.”