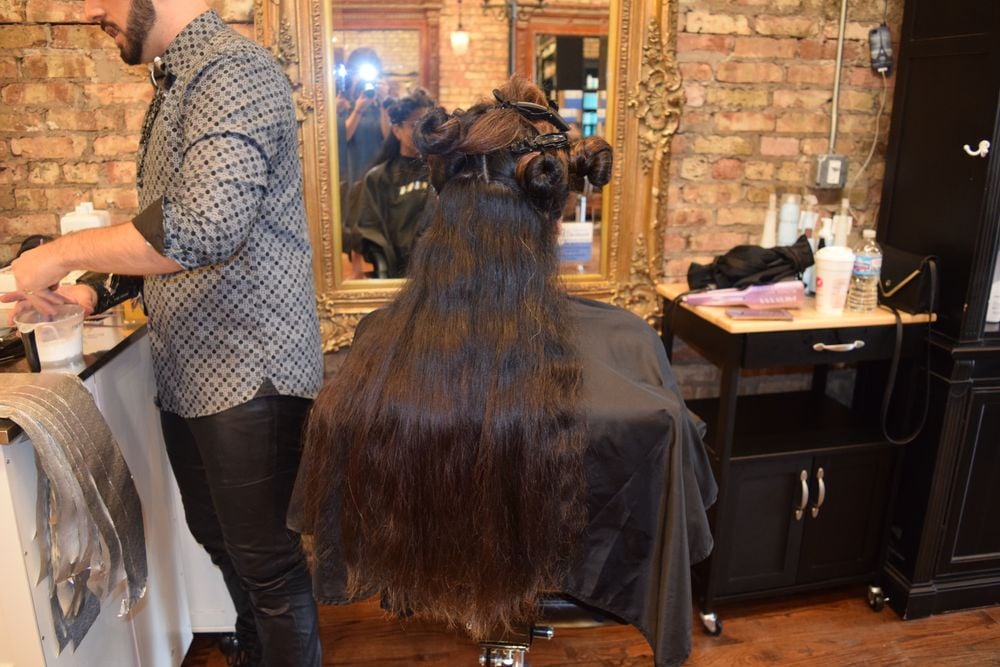 Model's hair before. Dark and long with some existing lightened pieces. 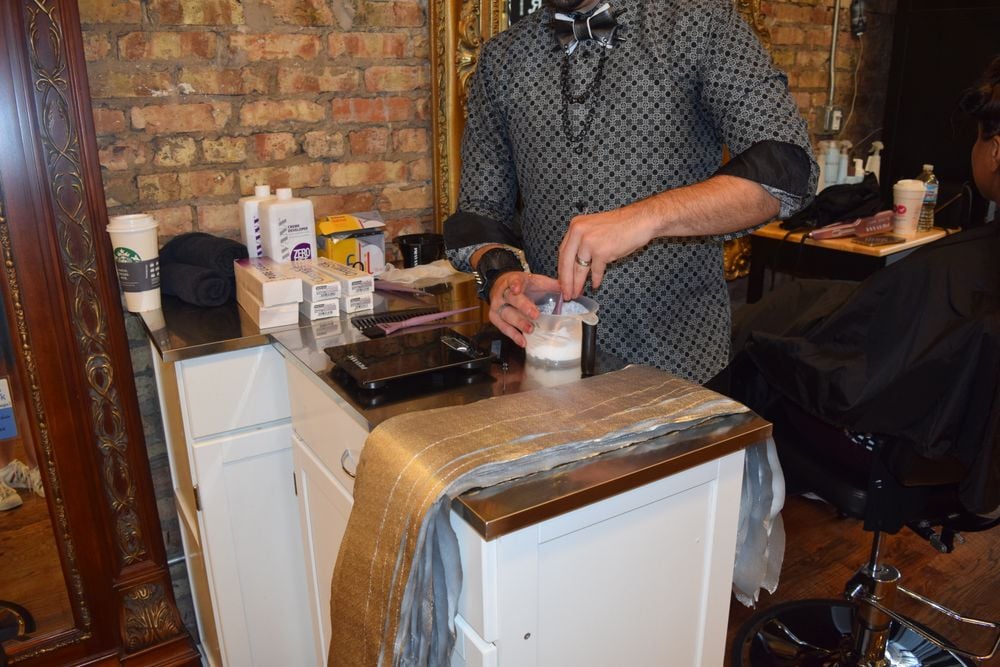 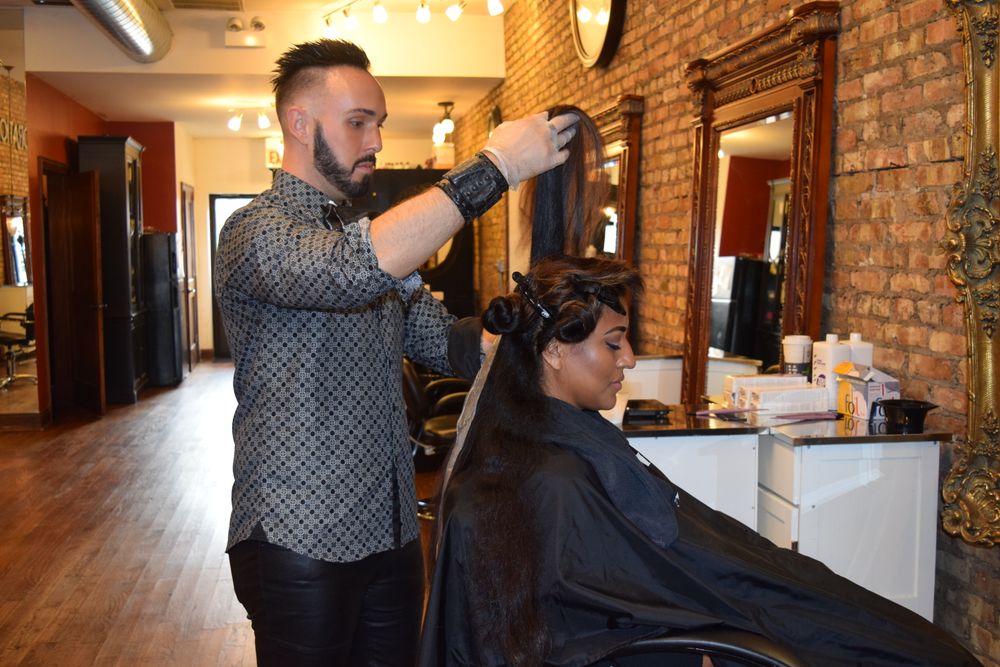 Painting as usual, Carnegie makes sure the foils lay flat, as do the sections of hair on the foil. Then, place another piece of flat foil on top, sandwiching the highlighted section of hair. 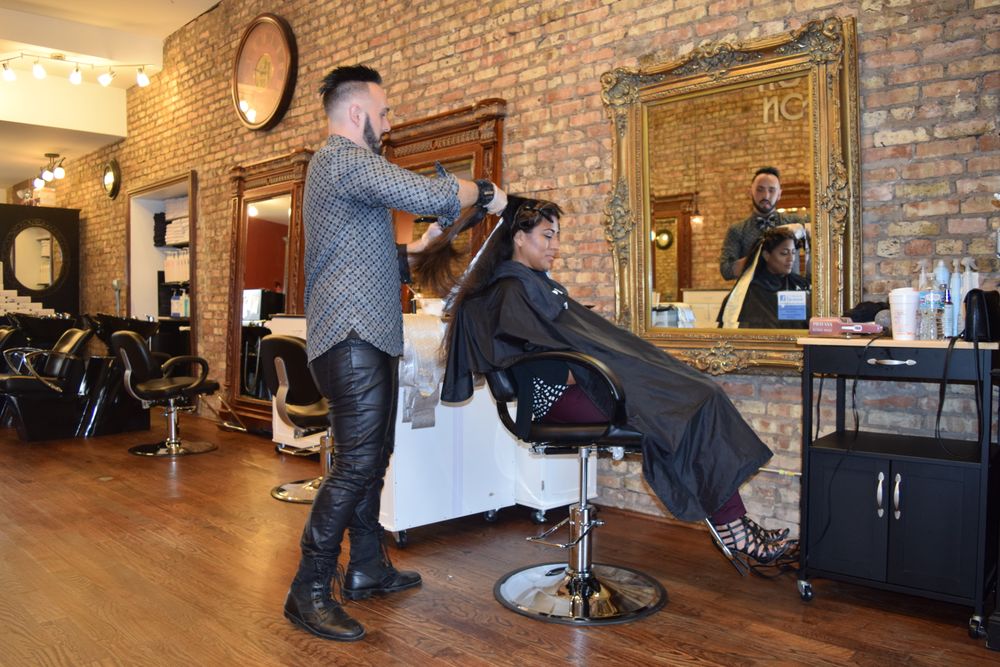 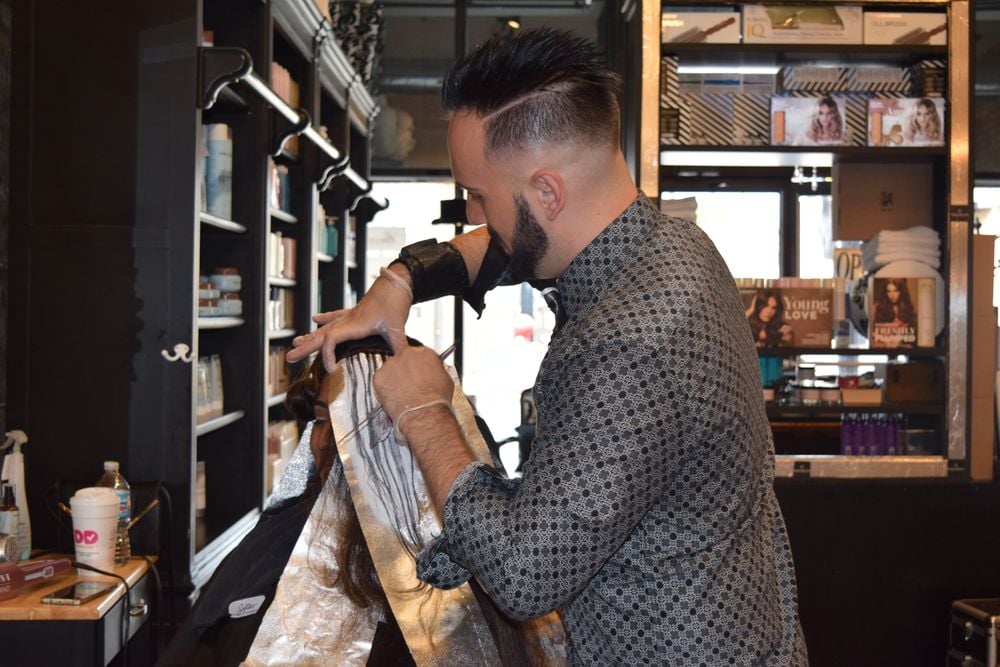 Lightening the front pieces of hair. When using the Blonde Wand on these parts, Carnegie says it's important to use a tapping technique rather than hovering in circular motions (see video) to avoid liquefied lightener from dripping out of foils (the lightener contains coconut oil, and you know what happens to that when heated...MELTS). 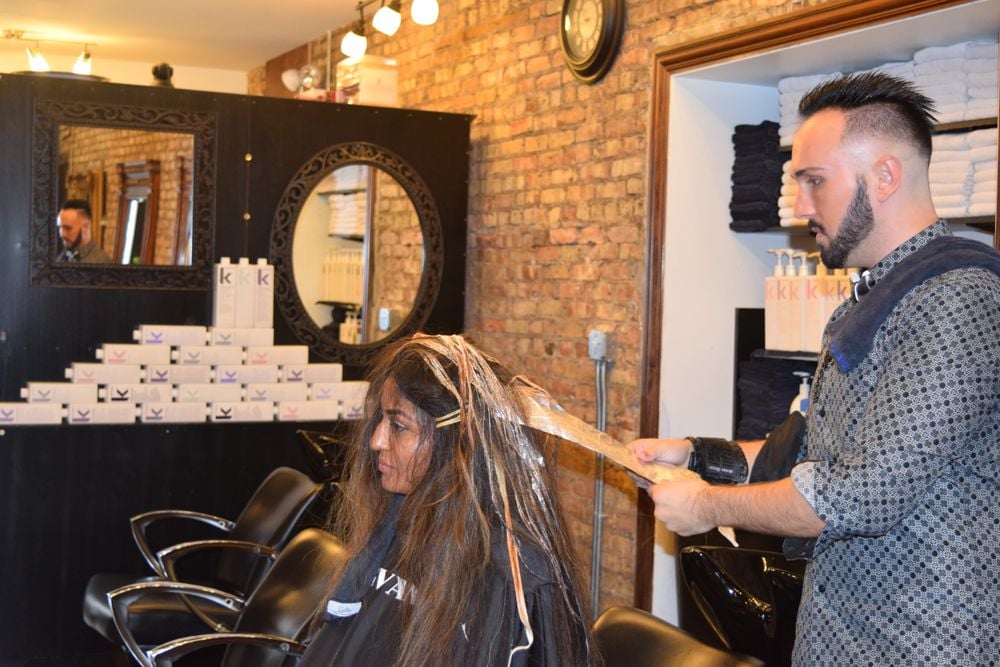 After processing and Wand-ing, Carnegie removes foils near the shampoo bowl. 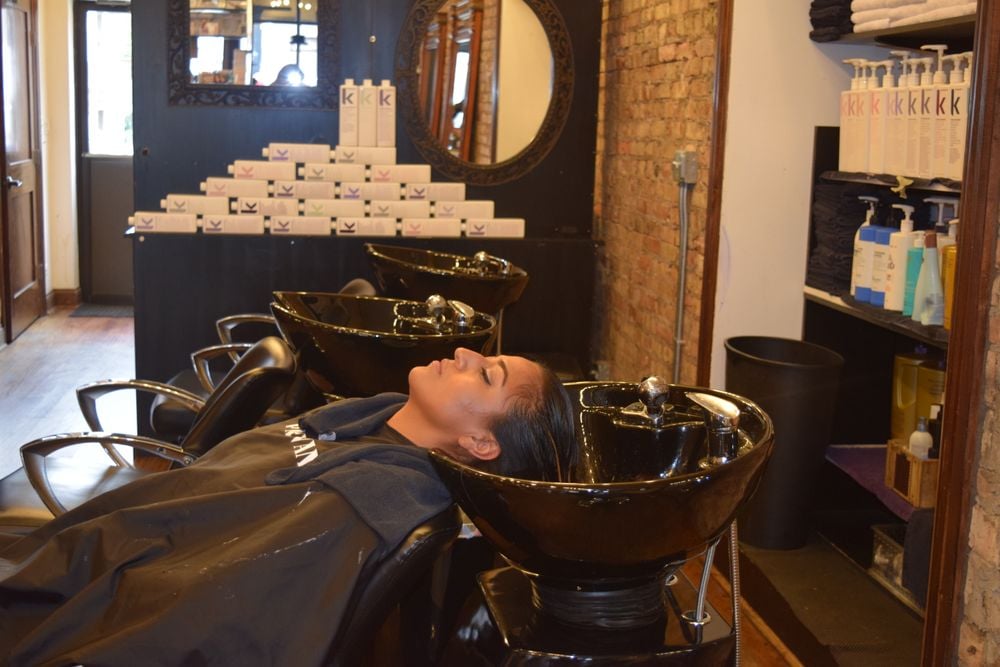 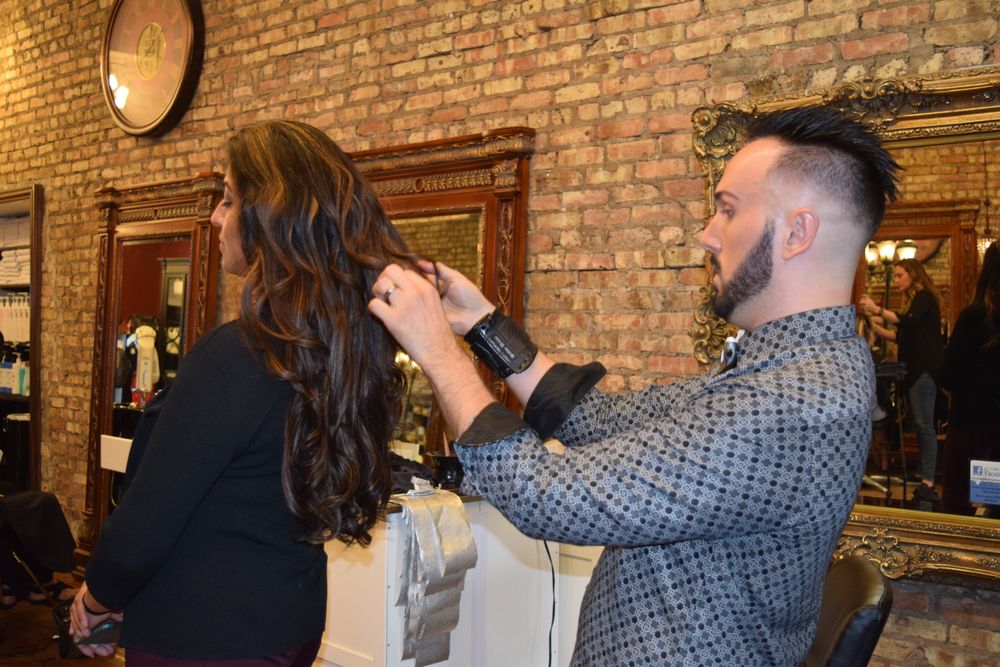 The entire lightening application, processing and Wand-ing, rinsing and toning time totaled about 90 minutes. All that long, luscious hair took about the same about of time to blowdry and curl. 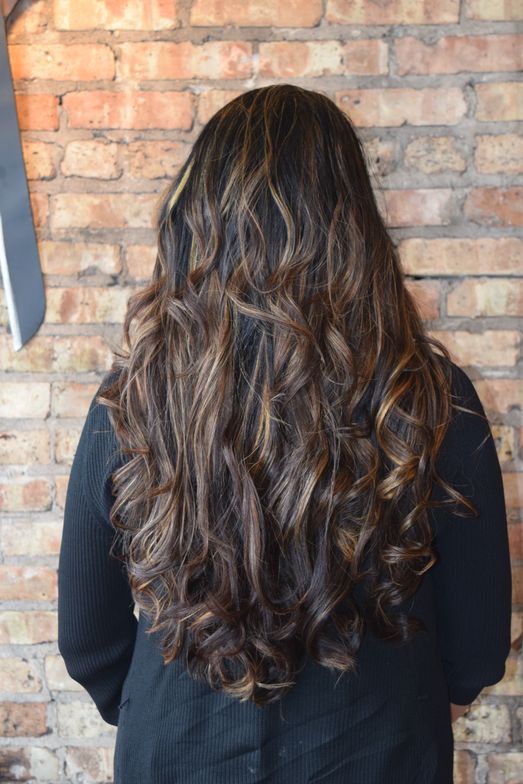 1/9
Slider
Model's hair before. Dark and long with some existing lightened pieces.

3/9
Slider
Painting as usual, Carnegie makes sure the foils lay flat, as do the sections of hair on the foil. Then, place another piece of flat foil on top, sandwiching the highlighted section of hair.

5/9
Slider
Lightening the front pieces of hair. When using the Blonde Wand on these parts, Carnegie says it's important to use a tapping technique rather than hovering in circular motions (see video) to avoid liquefied lightener from dripping out of foils (the lightener contains coconut oil, and you know what happens to that when heated...MELTS).

6/9
Slider
After processing and Wand-ing, Carnegie removes foils near the shampoo bowl.

8/9
Slider
The entire lightening application, processing and Wand-ing, rinsing and toning time totaled about 90 minutes. All that long, luscious hair took about the same about of time to blowdry and curl.

Pravana's Blonde Wand is changing the way artists can lighten hair. MODERN SALON got to see it in action and ask the questions we've all wanted answered, thanks to Pravana Educator Jordon Carnegie.

Carnegie's model began with a long mane of very dark hair that reached past her waist (Carnegie referred to her having "buckets of hair."). Most of it was virgin, outside of some existing highlights. A whole color service for this amount of hair would most likely take at least a couple of hours, but using the Blonde Wand, the entire lightening, toning and rinsing process took approximately 90 minutes.

"The biggest perk of the blonde wand is to accelerate your front sections," Carnegie says.

The same rules of blonding apply. Those pieces that were first to have lightener applied to have already been processing longer, so the Blonde Wand isn't necessarily needed on those. But with the Blonde Wand, the front sections can catch up to the back ones, and your client can be in the chair for less time.

Here, Carnegie answers questions about the Blonde Wand, from maintaining integrity of the hair to how to charge for a service using it.

Is the Blonde Wand damaging to hair?
“It’s a very common concern," Carnegie says. "We’ve been a proponent of not using heat with our regular lightener, but Pure Light Crème Lightener is formulated with coconut oil, which is the only Pravana lightener to get the go-ahead to be used with the Blonde Wand. It has coconut oil base, so it’s deeply nourishing and conditioning as it works. We’ve tested it with the use of the Blonde Wand with an outside party and it’s actually safer and better for the hair, leaving the hair in a better condition even using the Blonde Wand, than it does with just a regular lightener.”

How is this different than a flat iron?
“You’ll see that there is no temperature control, so it’s one heat setting that is specifically designed to be used with the Pure Light Crème Lightener," Carnegie says. "The lightener can be used on its own, but it’s accelerated with the specific head the Blonde Wand is set to. The other thing is that the plates do not touch, they stay apart. So when you’re going over the foil, you’re not clamping onto the hair as you would do with a flat iron; that would be quite damaging to the hair. We’re just hovering the heat over the foil." An added note: the temperature has not yet been released by Pravana.

Why should I invest in the Blonde Wand? How can it benefit me?
“The Blonde Wand is a true game-changer in the blonding world," Carnegie says. "Being able to reduce processing time in half is huge. The Wand will help lighten in second on lighter starting levels of hair. For clients with deeper levels like our model, this will cut that down to minutes. Also, imagine someone who has horrible banding throughout their hair from color overlap. The Blonde Wand, coupled with gentle lightener, will cut through bands stress-free.

“For a creative color service, imagine someone who wants several pops of color. Normally, a stylist has to foil in those pieces, then wait up to 45 minutes in order to get them to the appropriate level in order to place bright colors on top. With the Wand, the time of a creative color service can be cut down significantly, while maintaining the integrity of the hair. It’s a must-have for guests who want ‘lunchtime highlights.’ The possibilities are endless.”

Should I use a bond builder with the lightener?
“The conditioning properties and the control is already built into the Crème Lightener with the coconut oil. The need of an additive is no-longer needed with this specific lightener, unless you want to use it."

Can I achieve different gradients using the Blonde Wand?
"Yes. Quicker passes give less lightening or a more gradient effect; slow passes give more lightening. Make sure to spend more time at the ends because of this, but never keep the wand in-place. Continuously move the Wand in elliptical motions."

What foils should be used? How should they be applied?
“Pre-cut foils are not going to be your best friend," Carnegie says. "The roll foil that you can cut to your own length is going to be easiest to use…(on pre-cut foils) The Blonde Wand catches where the two foils meet and can start bending the second foil. The ones you can cut yourself are the best so this doesn’t happen and everything lays flat. When you put the foils in, you want to make sure the hair is nice and flat and you’re not bringing the ends up and folding them back onto themselves. It’s the same thing for the foils; you want to make sure you’re not folding them up. Just sandwich another foil right on top. Make a lip closure right at the bottom of them to make sure when the heat hovers over the lightener and it changes consistencies, as coconut oil does, nothing drips out of the bottom."

Should I charge clients more if using the Blonde Wand?
“Yes. Absolutely. Just like anything in our industry, you’re charging for your education and expertise, so charge what you’re worth! This is something that does require skill and expertise and a general understanding of how to use it.

Does the lightener swell?
“No. The lightener does not swell. It is a creme lightener, so it’s very creamy (as the name implies) and it does not puff or swell.”

Can the Pure Light Crème Lightener be used on its own?
“The lightener itself has a lot of power," he says. "Even though it’s very gentle, it can give you up to five levels of lift on its own (which is why there is no need to touch the back section of hair). All the Wand is going to do is take it beyond the five levels. It gives the ability to catch everything up (to the back)."

The Blonde Wand is available in an introductory kit for $79.99. This includes one Blonde Wand, six 3 oz. Pure Light Crème Lighteners and one DVD of exclusive education and technique.

For Valentine's Day or any day that clients want to take their pampering home with them.

Three brand new treatments formulated to restore and protect the health of your natural nails.

Say hello to the new leave-in conditioner that’s all about healing and shine.

Redesigned with a smaller barrel, this blow-dry brush is a win for styling short hair and hair with lots of layers.

Inspired by the aurora borealis, this new collection is here to light up your night sky.

The perfect recipe for summer hair? Effortless texture with a fresh-from-the-beach vibe. The secret sauce for just that is Dreamhouse from R+Co in collaboration with celebrity stylist Ashley Stricher. The multitasking mist moisturizes, protects hair from the elements, helps enhance color, and accentuates natural waves.

The So Miami Collection from Colortrak

Aprons as unique as you.