Dean Christal is an industry lifer whose father worked for Helene Curtis and brother founded Alterna. When he met two world-class chemists who had little interest in hair, he hooked them with one idea: That they could “make an incredible impact, making women happy with their hair.” How? By creating a product that would fix damage and stop breakage.

The chemists, Dr. Craig Hawker, director of the California Nanosystems Institute and the Dow Materials Institute, and co-director of the Materials Institute Lab at the University of California Santa Barbara, and his colleague Dr. Eric Pressley, were amazed that no one had done what they immediately considered. After extensive patent searches and 24-hours in Pressley’s garage, the polymer-research chemists created Olaplex.

Christal gave it to chemical pro Joe Santy (Attitudes Hair Studio, Langhorne, Pennsylvania), who tested it with perms, then decided to try it with lighteners.

“It absolutely stops bond breakage and leaves the fiber intact,” Santy says. “And using it is as simple as it gets.” (Santy believes it can reignite perming; Christal was stunned when he heard how it worked with color, which was the easiest first-up.)

After celeb colorists Tracey Cunningham and Guy Tang “tried it, loved it,” Olaplex took off, fueled by Instagram alone. Within a month, Christal had 4,000 salon orders. Now, he’s adding 100 a day and re-orders are pouring in. 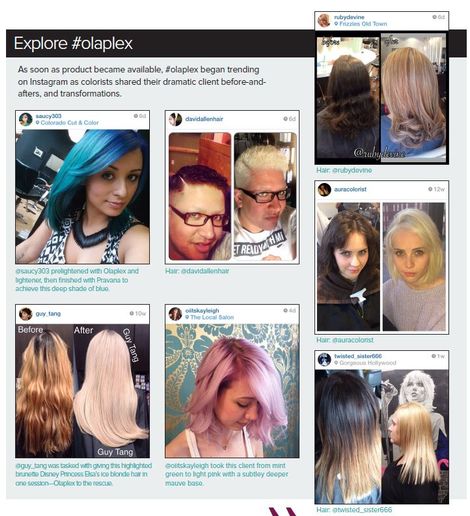 Olaplex is a liquid color additive that works with any brand of color or lightener to prevent hair damage. Colorists know that during chemical processing, disulfide bonds get broken and then reform, but that not all the bonds reform. That’s how chemical damage compounds. It’s also where Olaplex comes in.

At the point when sulfur-hydrogen bonds break up, either allowing the reformation of the disulfide bonds or unfortunately creating hair-damaging sulfate groups, Olaplex interrupts the process. It adds strong carbon bonds to both ends of the sulfur-hydrogen bonds. Using a single molecule, it creates these bonds before oxygen can remove the hydrogen—the process that normally allows sulfur atoms to reform as disulfide bonds. (For chemistry geeks, it moves the hydrogen to a more stable position.) Multiple international patents are pending.

Christal, who created online buzz by responding to everyone who used the hashtag #olaplex, says while he once resisted, he’s going with colorist community’s definition of Olaplex: insurance. “They told me it beat fear of processing and acted like an insurance policy,” he says.

Of course, if you want real insurance, use common sense. Don’t use Olaplex on hair you wouldn’t normally expose to the process you’re considering. Follow the directions—don’t use too much or you won’t get lift. When you formulate, add Olaplex in the correct amount, and bump-up the developer volume (from 20 to 30, or 30 to 40) to accommodate longer processing times. Once the hair is rinsed, increase bonding with Bond Perfector No 2, applied at the bowl for five minutes.

“There is no fade-off; once the carbon bond linkage is created, it’s permanent,” Christal says. And since nothing is 100 percent when we are talking millions of bonds, Hair Perfector No 3 is available for take home, letting both salons and consumers bond even closer. 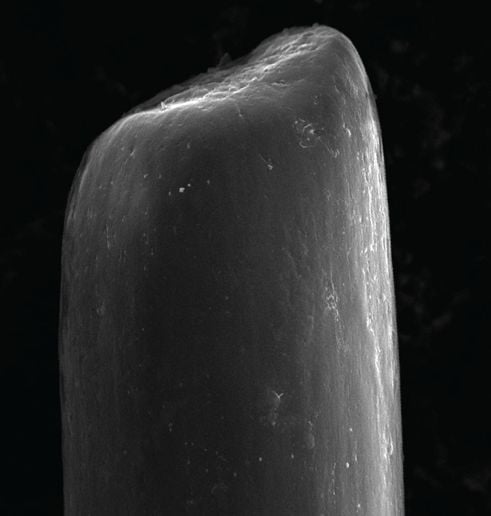 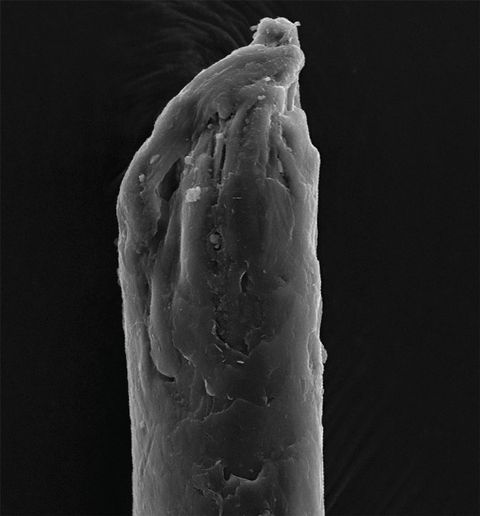