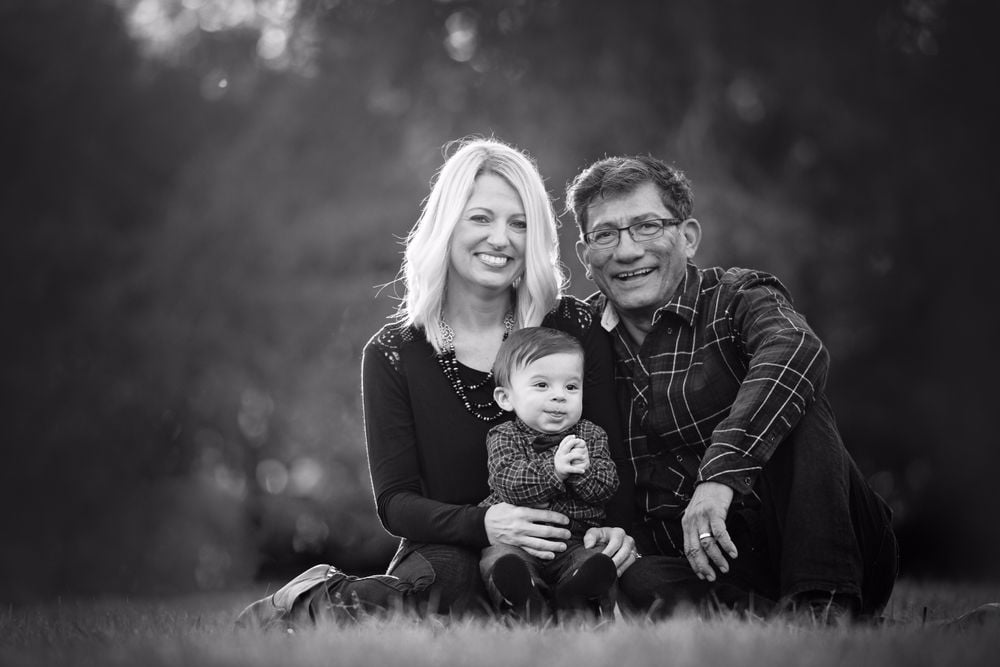 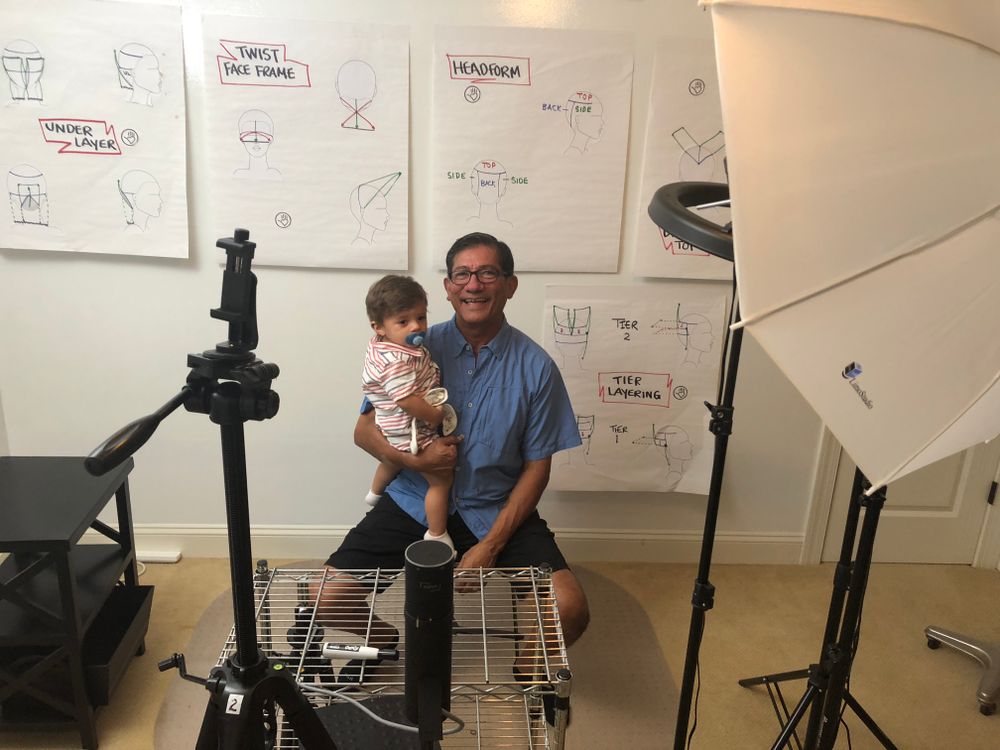 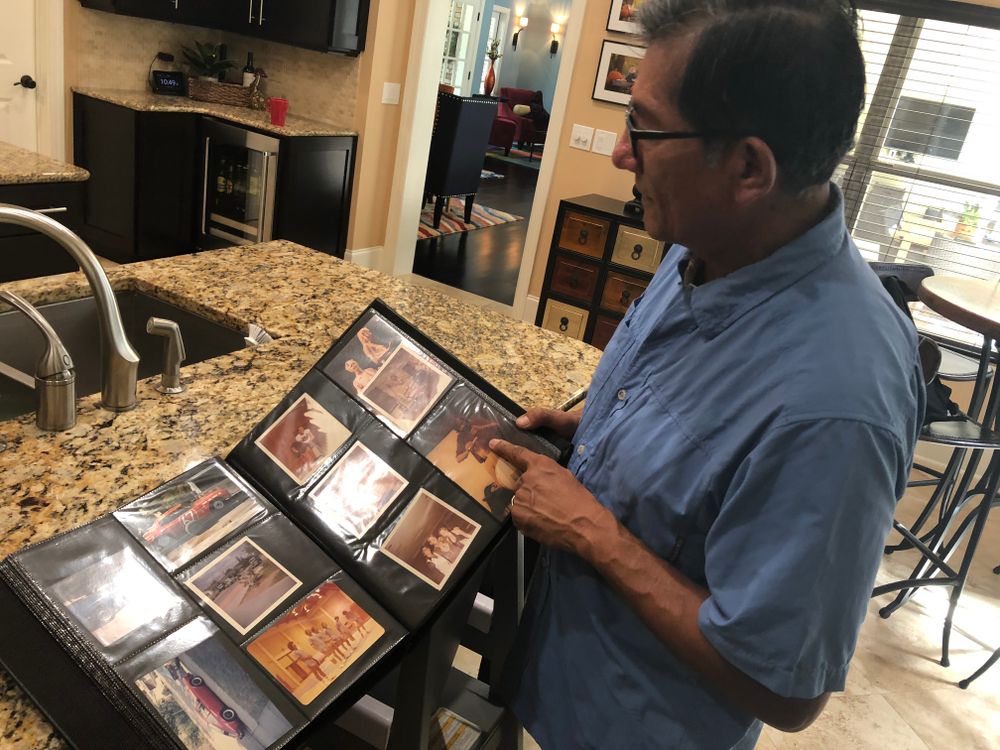 Sam Villa advises that all salon professionals keep pictures of their journey. Here he looks over some of his favorite photos. 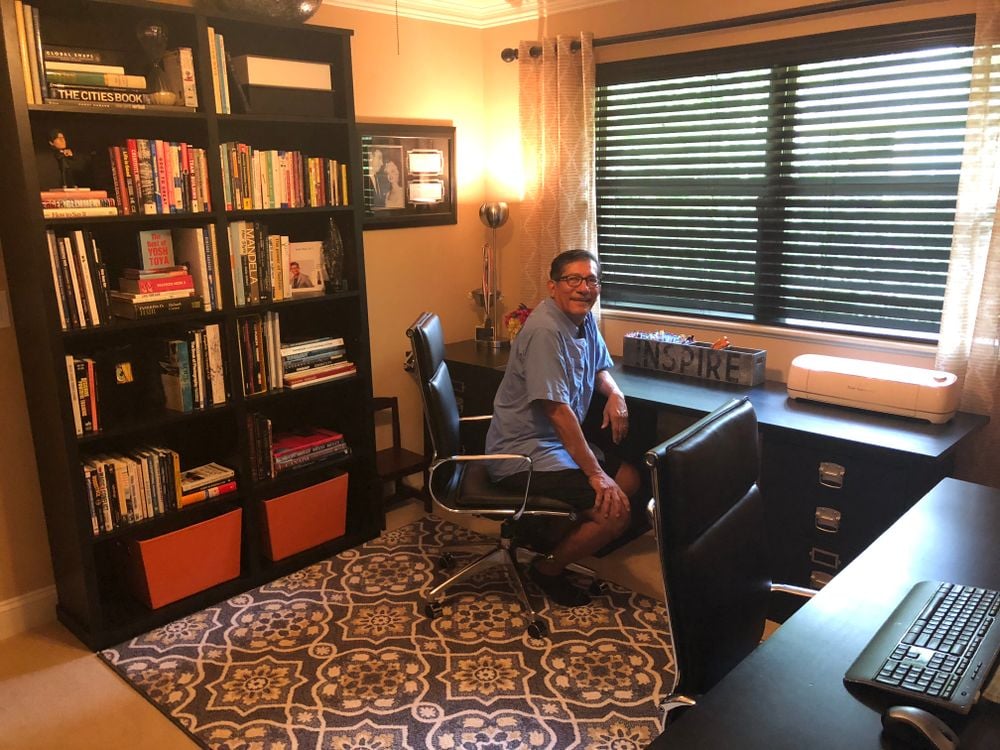 Sam Villa reflects in his home office in his Fleming Island, Florida home. 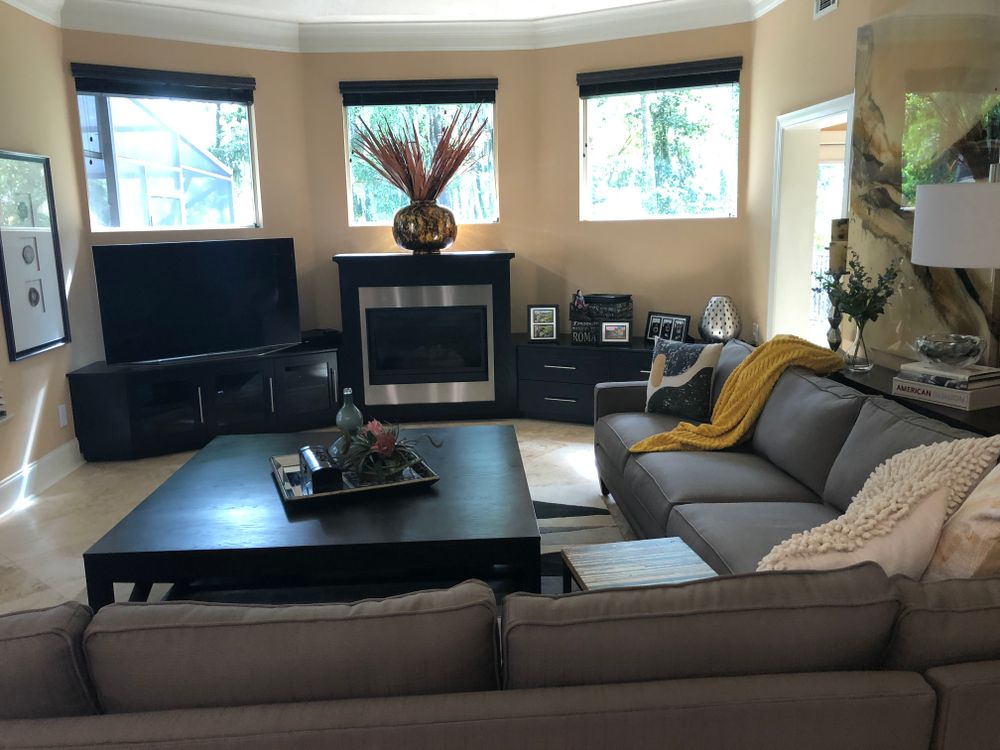 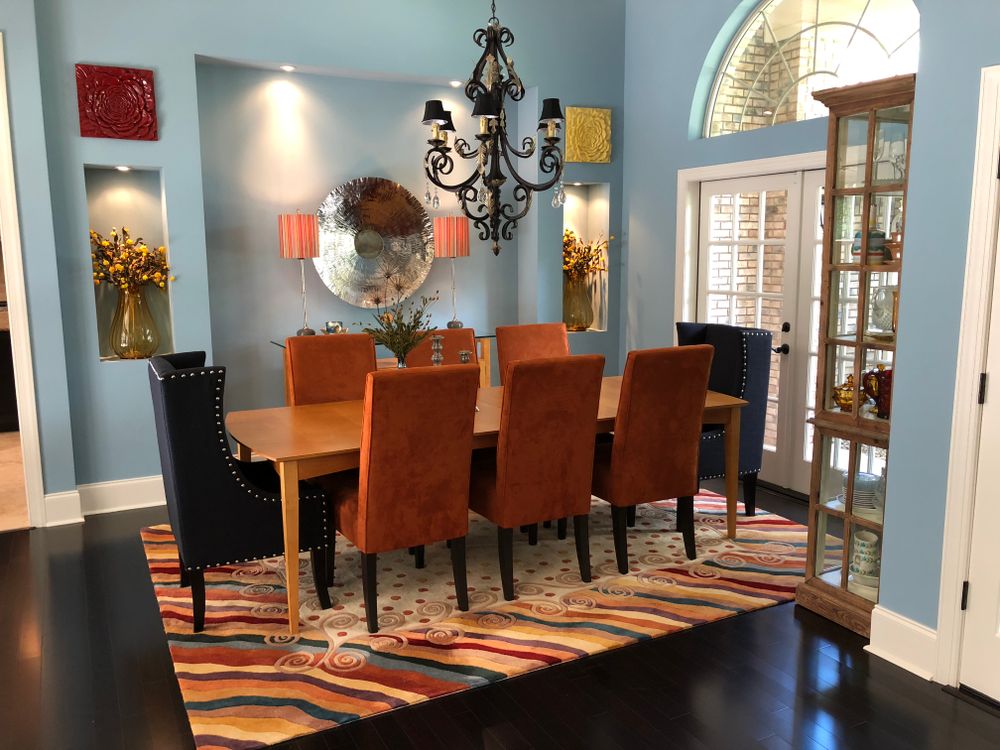 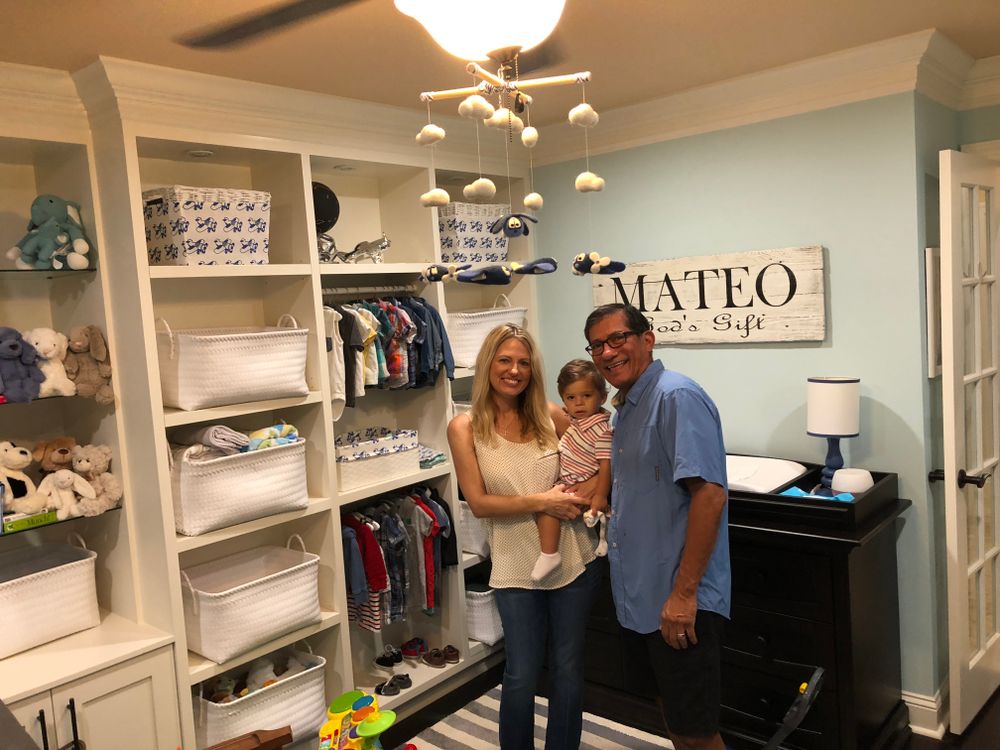 Sam Villa with wife Lisa and son Mateo in Mateo's room in the family home in their Fleming Island, Florida home.
1/7
View all

3/7
Slider
Sam Villa advises that all salon professionals keep pictures of their journey. Here he looks over some of his favorite photos.

7/7
Slider
Sam Villa with wife Lisa and son Mateo in Mateo's room in the family home in their Fleming Island, Florida home.

There aren’t a lot of traditional industry icons that have figured out how to bridge the old and new worlds (you know, before and after the birth of social media.) One of the few that was a star then and is a star now is Sam Villa, famed educator, Redken Global Artistic Ambassador, and co-founder of the Sam Villa line of tools including the best-selling Sam Villa Light Professional Ionic Blow Dryer and the new and exciting Sam Villa Streamline Series shears. Best known for his amazing hairdressing talent, stage presentations, education and business skills, Villa has found the time to build an impressive social media following. His @SamVillaHair Instagram site has close to 800K followers featuring more than 3700 posts chock full of inspiration, education, motivation, lifestyle and some of his favorite products and tools. More than 585,000 people subscribe to his SamVillaHair YouTube channel (with 63 million views and more than 205 million minutes viewed.) On Facebook, the SamVillaPros page has 268,000 followers and Villa has a significant presence on Twitter (SamVillaHair), Pinterest (SamVillaHair) and LinkedIn.

MODERN’s Maggie Mulhern stopped by to spend time with Villa at his home, set in an exclusive enclave on Fleming Island just outside St. Augustine, Florida. Set at the end of a cul-de-sac among classic Spanish Moss and Oak trees, many of the rooms (including most of the four bedrooms) feature a lovely water view. There is a pool sheltered by a lanai, and several tastefully furnished and decorated common rooms.

Villa took a break from work, spending time with his beautiful wife Lisa and playing with toddler son Mateo. There is so much to learn from Villa, but for this meeting we decided to focus on social media, and how mastering the platforms of Instagram and Youtube may carve a path to success for any talented salon professional.

“The social digital world has truly changed the way we all do business,” Villa says. “Companies and artists that have embraced this change and have become creative in how they reach their customers are thriving in the new environment. Our brand seized this opportunity as a way to spread education and uplift the standards of our industry and, in turn, it has grown our brand awareness and our reach across the world.” Villa’s attitude for doing social was more about wanting to help the industry grow. “I felt a shift happening in the industry and saw social as a platform to share educational sound bites - educational tips that were quick simple tricks that could assist and add value to all hairdressers.” Villa adds that the value he means is simply knowledge and that more than ever before that professionals and consumers are looking for simple solutions.

MODERN asked Villa to share his advice on how-to grow a social media following. “It’s important to know it’s not going away,” Villa says. “Embrace it. Redken built my career but social has built my brand and name.” Villa readily admits he has a team, led by Education Director Andrew Carruthers, to help him on this social journey. He would have to! Villa travels  hundreds of thousands of miles each year (250K last year alone.) He is on stage, at shows and constantly creating content for his various outlets in his studio at the far end of his home. But for Villa, it’s worth it - because he says it’s all about sharing.  “It’s important to help each other grow and prosper. We all need to pay it forward and mentor people to bring out the best in them. Sharing is the greatest gift we can give one another.”

When it comes to sharing, Villa takes it seriously. Here he continues by offering his top seven tips and best practices to increase views and earn more followers on social media:

Villa offers a bonus tip for salon owners, saying it’s important to support and promote each other. “It’s a great idea to regularly post tips from the hairdressers working in your salon. It’s so important that we continue to uplift the industry by respecting and mentoring one another… and a social platform allows for that.” When doing so, remember to tag  #ArtistsSupportingArtists, a hashtag Villa and Carruthers developed to promote a continued positive environment for the professional salon environment. The tag already has close to 63K posts.

Villa, clearly at the top of his game, has much to be thankful for as he sets his head on his pillow at night. When asked what he is most proud of, Villa says, “I was the recipient of the 2017 NAHA ‘Lifetime Achievement Award. I was deeply humbled by this recognition. Awards represent achievement, and to a certain extent show more about who you are as a person because they reflect your desires, ambitions, goals and accomplishments.” But after acknowledging he achieved this level of success as a result of being supported and mentored by the many talented individuals in the salon industry, Villa says that more importantly, he feels “privileged to be in a position to pass it on to others.”

Check out this video for more tips as Villa and Maggie Mulhern discuss social media and more while relaxing by Villa's Fleming Island, Florida pool: