During our interview with Sonya Dove (@sonyadove), one of the judges for Wella North American TrendVision 2018, held in Las Vegas in June, there was a power failure in Caesar’s Palace and the room where we were meeting went black. It was the ultimate illustration of a Sonya Dove philosophy of not trying to control every outcome but to just go with what comes next. She picked up her iPhone and immediately started to live stream and share the drama.

Dove, a celebrated colorist, educator, and salon owner, deserves the adjective ‘icon’ because her career has put her in front of millions of hairdressers, inspiring them with her work and her hard won wisdom. And her fantastic journey all started with some hair competitions as we learned in this conversation…

MODERN SALON: Sonya, tell us how hair styling and design contests shaped your aesthetic and your career.

Sonya Dove: Well, it probably shows up in my work, that I like quite finished work, and that’s because I did so many competitions, years ago. That is the route I’ve taken, compared to something more editorial, starting from when I was in beauty school in England. You know, when you’re just starting out, you're young, excited, you've got so much energy and so I started entering competitions. I did that from 1980 to 1987, and I didn’t get anywhere for about seven years. Then one year, I placed third in a competition in Wales… and I was so glad because while it’s fun to do it, it can get very demotivating if you don't ever place. That's why when I speak to students or speak to competitors, I say to them, ‘Don't ever enter a competition for the win, enter and be in it for the journey.’ Because if I had given-up after one, or three, or five, it wouldn't have molded me to be who I am today.

So I came in third but then the next competition I entered, I came in first. And then once you start to get it, you're pretty much on a roll. I entered competitions for about two more years, and I basically won every competition in England.

MS: What did you learn from doing competitions?

SD: Well, while it’s true that it can be costly, and it can take up so much time, but for me, there was nothing finer than seeing your model, head-to-toe, and knowing that you created that. It is very team building, too, because you’re collaborating with other artists.   And that's how I started my career and it really got going when Wella approached me to see if I would do a class in their Wella Studio in the big city of London.

MS: So, by this time you were running your own salon with Christopher Dove.

SD: Yes, we had three seats in our salon in Devonshire. We had two chairs, one for Christopher, one for me, and we had one shampoo basin. And we were surrounded by farms and cows. But entering these competitions, that’s how we both got seen by Wella. We did a two-hour class for them and it was so successful, they just kept asking us back. 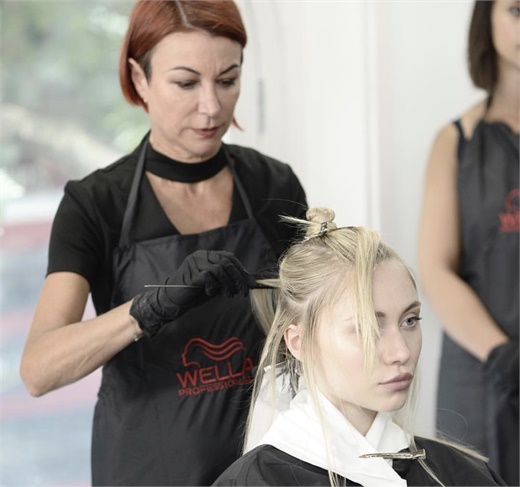 MS: And that's how it started.

SD: Yes, that was the visibility in 1980 to 1987. What's the visibility now? Our phone, social media. And I have to say, I love it and I wish I had that tool when I was young. I wouldn't have done seven years of competitions before Wella discovered me.  It’s so great for marketing and for getting discovered. Am I good at social media, am I bad? I'm neither. I just try. I will never not try.

MS: What are you looking for when you’re judging TrendVision?

SD: The reason I love this competition is it's not just a photographic competition because we all know in photographs, you can do a lot of manipulation. We're actually going to see the competitors work live. I'm going to read the energy and passion of the competitors. And when they talk about their look, I’ll see if they are speaking from their head or they are speaking from their heart. Are they passionate about what they created?    I'm also going to look at the model and see, ‘Does she or he love their hair?  Are they having fun wearing it?’

SD: I am not one to look back on things. So during my life, whether it's been in my career, or personally, or whatever it is, I just go forward. I don't ponder on the past. I learn from the past, but I don't let the past define what I'm going to do in life. Otherwise we can still live so much in the past that we're missing the opportunity of the present and going forward.

MS: So you weren't going back to, "Oh, what did I do last time that failed?"

SD:  Yes, exactly, I wasn’t doing that. I don't focus on the negative, I look to see what I can do to make things better, whether it's running a salon, whether it's being on a stage, or it's educating, or it's mentoring. I’m always forward thinking.

The other thing I’ve learned is to be me all the time and this is what I say to the competitors, ‘Don't try and be somebody else. Try and be you.’ The more you can bring yourself to everything you do, whether it be hair, living your life, or anything, it's going to be better. Because it takes far too much energy to try and be someone you're not.