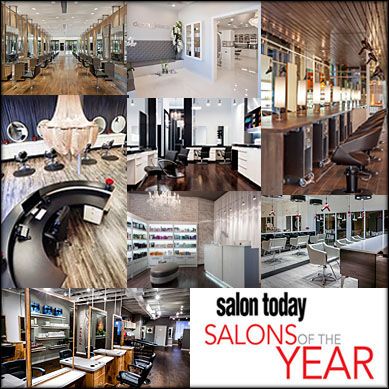 SALONS OF THE YEAR, SALON TODAY’s renowned competition for salon and spa design is in its final judging stages for 2014. We are proud to announce this year’s 20 SALONS OF DISTINCTION, the finalists who will all be honored in the commemorative June 2014 issue, and who now proceed to the final round of judging. This last phase of judging determines the SALON OF THE YEAR, whose design will grace the June cover.

To be eligible for the competition, salons and/or spas had to be newly opened or newly renovated during the calendar year 2013. To enter, salons submitted up to 10 professional photographs that best showcased their salon/spa design, as well as answered a series of essays about their design choices before the January 31st deadline.

Then, the judging commenced. In the first round, the SALON TODAY team reviewed and qualified each entry. Secondly, a panel of MODERN SALON Media editors and art directors evaluated each entry in further detail, selecting the 20 SALONS OF DISTINCTION. Finally, a panel of outside expert judges will scrutinize each entry and score each of these finalists in six different décor categories.

Judges scores will be combined and used to determine the grand-prize winner and the runners-up. The Grand Prize SALON OF THE YEAR will be announced May 31, 2013.

Check salontoday.com and SALON TODAY's Facebook page each day starting today and we'll introduce you to a new SALONS OF THE YEAR finalist each day--tell us which one is your favorite!

See all of the previous SALONS OF THE YEAR Winners.

Congratulations to the 2014 SALONS OF DISTINCTION:

SOTO - Salon on the Ohio in Cincinnati, OH, owned by Gregory Schroeder and Anastasia Kim

L’Oréal USA Professional Products Division has announced a series of changes to their executive leadership.

A day of solidarity for the human rights of Black men, women and children to wear their natural hair boldly and proudly, without the fear of being discriminated against in school or the workplace.

New solar array will provide 50% of manufacturing facility’s annual demand and will offset more than 1,100 metric tons of CO2 per year.

The Mizani Texpert Academy is a one-stop professional education destination to accrue the building blocks, services, and Texture EQ needed to become an expert in all things textured hair.

In partnership with Alter Ego Italy

Beauty and Kindness: Stylists Find What They Need from Partnering with Alter Ego Italy

During a tough time, two stylist/salon owners looked to Alter Ego Italy for support and say that working with the brand is making their return to the salon easier and more profitable.

This NTNA season was the toughest call of them all. Without the judges ever seeing the contestants or nails in person, judging was based on video submissions, Facebook Lives, written descriptions, and final photos from Top 3 contenders.

Eufora International Announces Next Phase of its Planet-Friendly Practices

Acknowledging the global impact of landfill waste, Eufora builds upon a long-standing  planet-friendly philosophy with introduction of a new "Refill. Reuse. Recycle." campaign.

In partnership with Sexy Hair

The newest collection from Sexy Hair, artistrypro, is a slim portfolio that is sold to and through hairdressers.

Sam Villa is co-hosting The Fabric of Change event on June 28th with a talented roster of Black educators and influencers.

From technical tutorials to leadership programs and sales training, professionals from all sectors of beauty can access video content specific to their needs.