James Dean, the actor, icon and King of Cool, smolders in a new Sexy Hair campaign. Dean’s timeless allure lies in his “woke up this way” esthetic and his organic, loose, and styled-but-not-fixed hair. Rafe Hardy, Artistic Creative Director of Sexy Hair, says Dean influenced fashion, design and remains a source of inspiration.

“James Dean was ahead of its time and his look has been emulated since the 1950s,” says Hardy. “He personified an effortless, laid back and casual cool style. His hair was left longer so it was very versatile and his natural movement would take over.”

Responding to the boom in men’s grooming and to help stylists improve their traditional barbering skills, Sexy Hair’s Classic Clipper class will launch all over North America in August 2016. Classes will also discuss how to work with a male clientele because, unlike the 1950s, today’s male client demands more from their stylist.

“In the past, a man would sit down and just say, ‘trim me up,’ but today’s male client is more discerning, they have an opinion on their finished results, and they may walk in with an image they found online and are invested in getting that look,” says Hardy. “With a better informed, choosier male guest, a stylist also has to bring more. The consultation has to be about listening to their needs, asking questions about their lifestyle and making product recommendations to recreate a design. Hairdressers need to find out how they want to look and feel. They have to involve the modern male client.”

For the client who wants that Dean-ish play and movement in their hair, Sexy Hair introduced Matte Texturizing Clay. This styling product separates, defines, and molds hair in place delivering a strong, non-shine, hold. 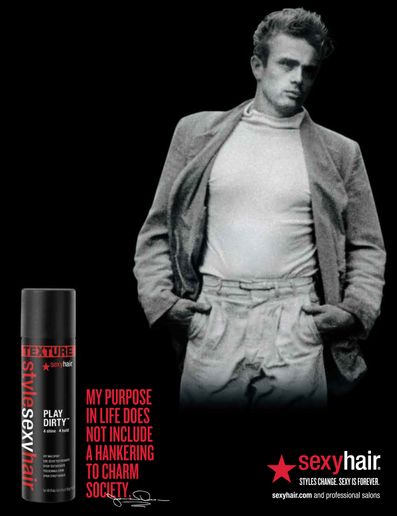 If it is passed by the Senate, natural hair discrimination could be deemed illegal nationwide.

Get ready for your closeup.

In a tense time, these artists are celebrating love with bridal styling that is soft, loose, but still locked-in with these new products from Sexy Hair.

The Beautiful Business of Bridal Styling

Sara Yousif is seeing a return to pre-virus busy-ness. Here are some of her most-requested styles.

Thinking creatively helped her continue to retail products and prepare to reopen her salon.

How Stylists Use Their Dyson Corrale Straightener

See how these professionals use this tool!

How to Create a Chinese Ladder Braid