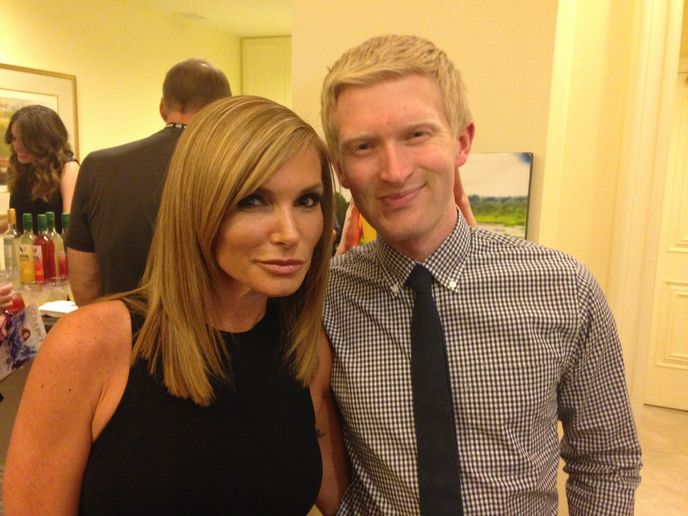 Before finalists for the North American Hairstyling Awards started biting their nails in anticipation at the evening presentation, many of them joined Eden Sassoon, beauty icon and founder of the EDEN by Eden Sassoon Finishing Studio at a private party to celebrate and learn about her partnership with The Thirst Project.

“Around the world, there are 784 million people (about 2.5 times the number of people who live in the US) who lack access to clean water. Often children walk miles to gather water out of ponds and puddles, and that dirty water brings dysentery and disease killing many,” Sassoon told the group. “My father (Vidal Sassoon) believed if the hairdressing community came together as one, they could create miracles. He did what he did with a pure heart and was the poetry for change. Water is a vital part of most hairdressing services and a key component in the shampoos and conditioners we sell, and I realized hairdressers today could get together and build some wells if they were aware of this issue.”

The Thirst Project is the world's leading YOUTH water activism organization. This movement of high school and college students builds freshwater wells in developing nations and impoverished communities to provide people with safe, clean water. The Thirst Project is a non-profit organization that travels across the United States speaking at schools to educate students about the global water crisis and challenging them to fundraise to build wells. One hundred percent of all public donations go directly to funding freshwater wells on the ground. The organization is really unique in that they have a private group of donors who fund one hundred percent of the organization's "overhead" so they can make this guarantee to the public. In just five years, The Thirst Project has activated more than 300,000 students on 320 campuses across the United States, and they have raised over 8 million dollars, one hundred percent of which has been used to give more than 260,000 people in twelve countries safe, clean water.

Maxwell, who is 26, launched the organization when he was 19 after looking through some photographs a photojournalist friend shared with him. “At the time, I’d made my way to Los Angeles like many others to pursue a career in show biz, and admittedly I was quite self-focused at the time. My friend a year traveling to areas of South Asia, Africa and South America, and showed me pictures of kids ages three to five, gather water from mud puddles and swamps. But they weren’t anonymous kids, she knew their names, played with them and watched as many died of cholera.”

“Imagine what we could accomplish if we could get cosmetology students and stylists around the country to donate just a dollar, or by informing our clients and asking them to contribute a small donation to the cause,” says Sassoon. “We can make a change, and as my dad would say, ‘Let’s get on with it.’’”

Shirley Raines is honored for bringing dignity through beauty and grooming to people living on the streets of LA.