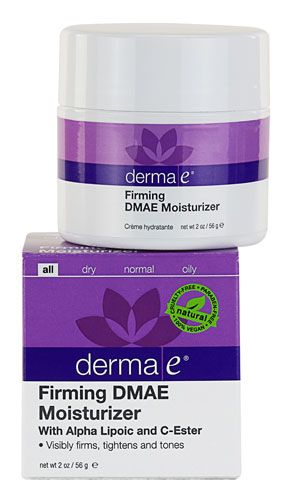 Derma E, the pioneer of vitamin-rich, natural skincare products, is pleased to announce that its Firming DMAE Moisturizer has been clinically tested and proven to be as effective as Perricone MD Face Finishing Moisturizer at visibly improving skin firmness, elasticity, hydration and barrier function.

The Firming DMAE Moisturizer and Perricone MD Face Finishing Moisturizer formulas were entered into an independent, double-blind clinical test among 55 women aged 37 to 65.  The study was a split-face test; one formula was applied on the entire left side and the other formula on the entire right side of the face, so participants used both formulas simultaneously during the duration of the test.  Determination of left versus right application was randomly assigned.  Formulas were ‘blinded’ so that neither the study participants nor the clinical technicians were aware of the brands being tested but could identify them by a specific code. Results were measured by Corneometer and Cutometer devices at time points zero, four weeks and eight weeks.  Participants also completed post-treatment comprehensive questionnaires. Both quantitative and qualitative test results conclude that derma e Firming DMAE Moisturizer is as effective as Perricone MD Face Finishing Moisturizer at improving skin firmness, elasticity, hydration and barrier function after eight weeks of use.

Findings from this study throw shade on the myth that natural skincare products aren’t as effective as non-natural or prestige counterparts.

“The results of this clinical test underscore the quality and potency that can be found in the natural beauty aisle, namely from Derma E,” says Jennifer Norman, VP of Marketing for Derma E.  “Our Firming DMAE Moisturizer contains the same key ingredients as the Perricone MD Face Finishing Moisturizer (DMAE, Alpha Lipoic and C-Ester), but ours also happens to be glycol-free, gluten-free, 100% vegan, and 1/3 of the price. It’s quite possibly the best skincare choice you can make.”

Matrix's latest innovation contains pre-measured color and developer in every pouch for precise dosing and portability. It allows stylists to cover 100% of grays in half the time.

RUSK empowers colorists with the introduction of new color products