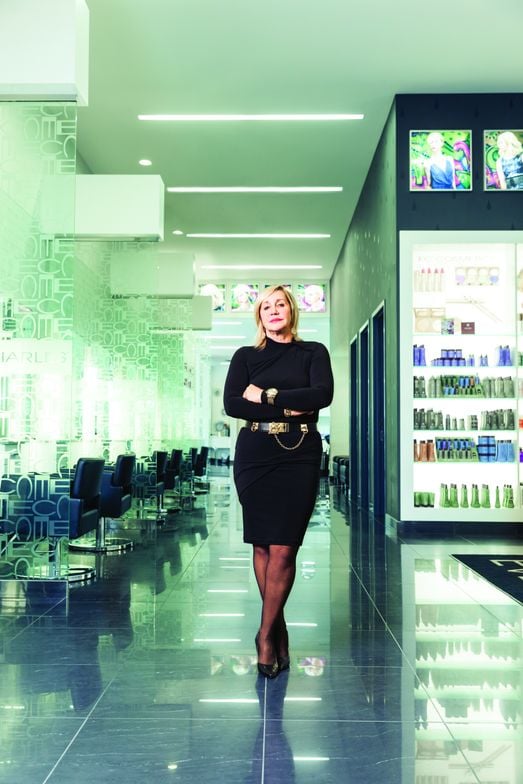 Beauty entreprenuer Eveline Charles, photographed in one of her signature salons, is pioneering a franchise concept with Canada's biggest retailer Hudson's Bay. 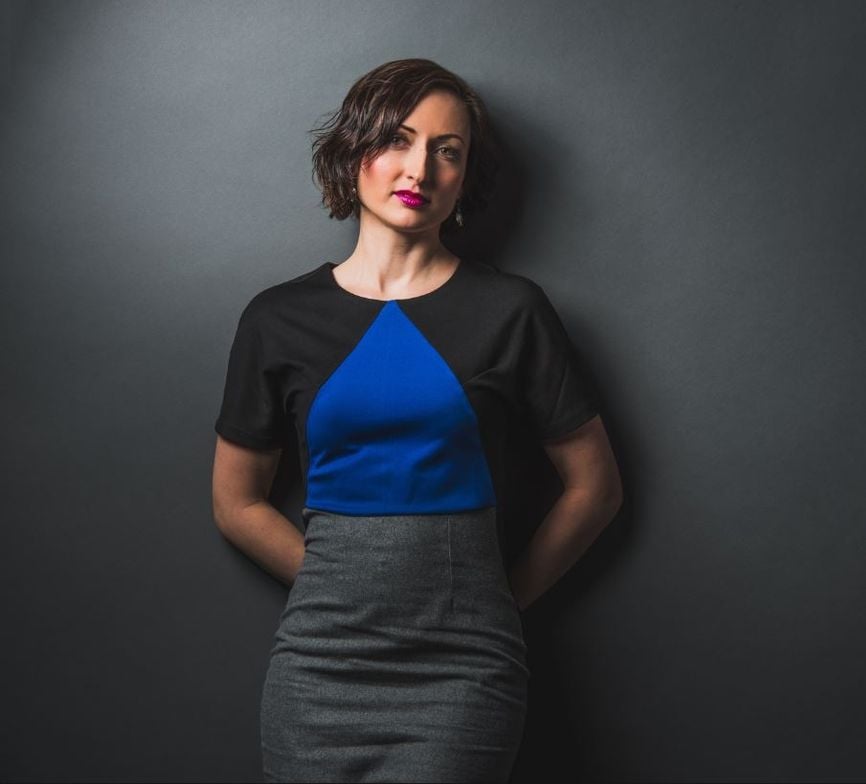 Lina Heath, president of EvelineCharles, says Hudson's Bay was the right partner for the franchise opportunity because it's cutting-edge and fashion-forward. 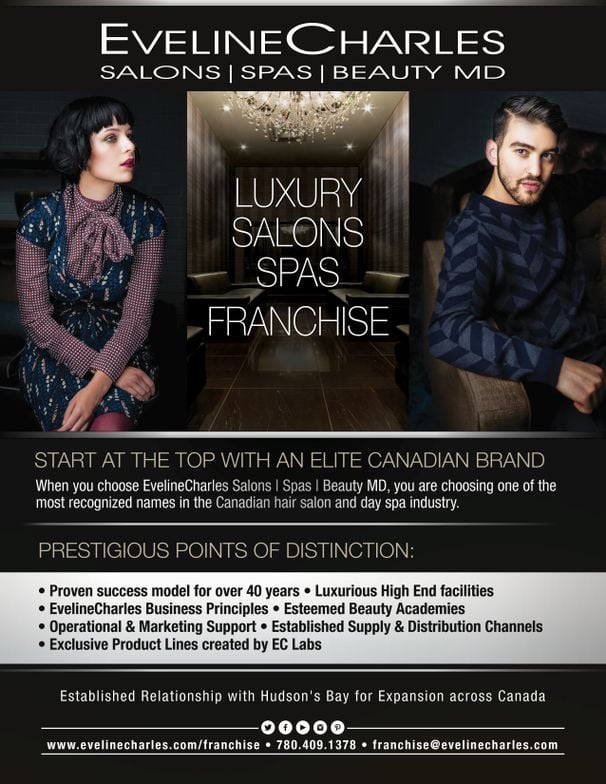 EvelineCharles sent potential franchisees this promotional letter outlining the benefits of the franchise opportunity. (Front of the brochure.) 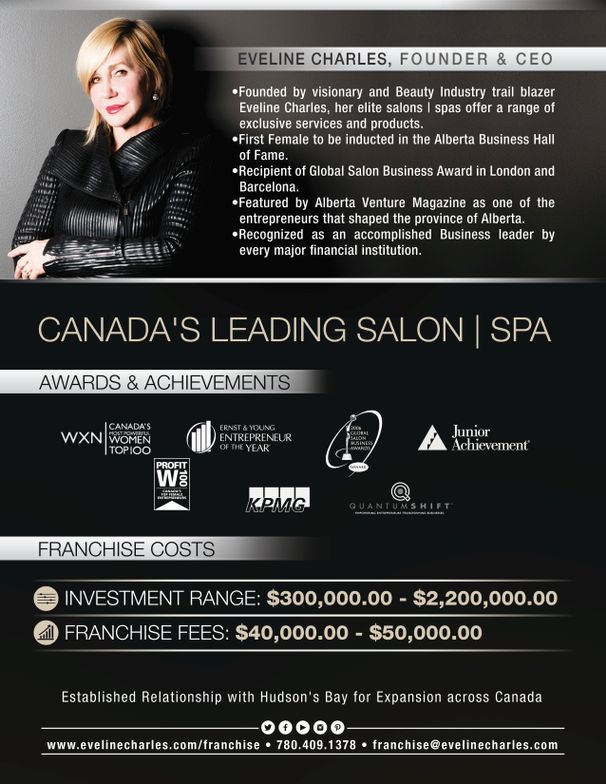 EvelineCharles sent potential franchisees this promotional letter outlining the benefits of the franchise opportunity. (Back of the brochure.)
1/4
View all

1/4
Slider
Beauty entreprenuer Eveline Charles, photographed in one of her signature salons, is pioneering a franchise concept with Canada's biggest retailer Hudson's Bay.

2/4
Slider
Lina Heath, president of EvelineCharles, says Hudson's Bay was the right partner for the franchise opportunity because it's cutting-edge and fashion-forward.

3/4
Slider
EvelineCharles sent potential franchisees this promotional letter outlining the benefits of the franchise opportunity. (Front of the brochure.)

4/4
Slider
EvelineCharles sent potential franchisees this promotional letter outlining the benefits of the franchise opportunity. (Back of the brochure.)

Eveline Charles, owner of seven EvelineCharles salons and two schools in Canada, doesn’t know the meaning of the word stagnant. From the moment she opened her first salon, she has been focused on the next phase of growth in her business.

“We’re a very aggressive company,” Charles says. “In addition to the schools and salons, we just started manufacturing our products in our own EC Labs.

“Before, we were making our products all over the world, but now we have three chemists who work for us to develop our own products, as well as products for others in the industry. We have our finger in every part of the business—it’s full circle.”

Charles’ next growth path, franchising, requires finding people like Charles herself—entrepreneurs.
“To grow across the company without having people who have skin in the game is next to impossible,” she says. “We’ve had to shut down salons in some cities because we don’t have people who want to grow in the community like an entrepreneur would. A manager won’t grow like an entrepreneur.”

The Right Partner
Over the years, Charles has fielded dozens of calls from people who want to franchise her salons. But until recently, she always said, “No, thanks.”

When Canada’s biggest department-store chain, Hudson’s Bay expressed an interest in franchising, Charles knew it was the right time for her to grow her company and that Hudson’s Bay was the right partner. After spending a year or so in the bidding process, Hudson’s Bay chose EvelineCharles—a win for both companies.

The Hudson’s Bay in Calgary, where the first salon is located, has 770,000 shopper visits every year in addition to hundreds of employees who come to work every day. All these potential clients will give franchisees of EvelineCharles salons built-in traffic—a much more promising start than getting buried in a strip mall. There’s incredible opportunity for franchisees to build their business much faster.

These entrepreneurs also will be able to tag onto Hudson’s Bay promotions and events.

“In our Calgary salon, we are located right next to the main entry of the store,” Charles says. “And we are part of optimizing Hudson’s Bay’s initiatives to bring in traffic—like bridal fairs, pedicure campaigns, etc.”
Lina Heath, president of Eveline-Charles, says Hudson’s Bay was the right fit for the salons because it’s also an innovative company.

“Hudson’s Bay stores are at the forefront of change, and they are pursuing service-based industries to enhance their business,” Heath says. “They wanted beauty as a part of that, and needed a salon group with a strong following.

“We started bidding on this in January 2015, our first salon in Hudson’s Bay opened in June 2017, and now we’re looking for aggressive expansion across Canada. The goal is to be in 90 Hudson’s Bay stores.”

Building a Franchise
Choosing which stores EvelineCharles would go into was a collaborative exercise between the salon and the retailer. For both parties, flexibility was key.

“In some stores, there are existing salons we’ll expand,” Heath says. “In other cases, we walk through the store and figure out where a salon makes sense. We also work with some of Hudson’s Bay’s scheduled renovations if it makes sense—or sometimes they will follow our lead.”

The size of the salons will range from 800- to 2,000-square feet, depending on the space available. Buy-in for a salon depends on the size and model. Salons start around $300,000 and go up to $2.2 million. But that price tag is all inclusive of all the high-end finishes of an EvelineCharles salon, including wall vinyls, chandeliers, quartz countertops to name a few, as well as full technical support and training.

Once a franchisee has decided to invest in a salon, he or she purchases the salon outright and the EvelineCharles team manages construction, build out and more to protect the investment.
“Our primary focus is on new development right now,” Charles says. “But that being said, we will also be evaluating the sale of some of our existing salons as franchises.”

“We gave the first opportunity to become a franchise owner to our employees, as some have expressed interest,” Heath says. “We are also doing presentations for the general public.”
Social media has been another platform for recruiting franchise owners. Most recently, Facebook campaigns marketed internally to EvelineCharles customers were utilized, as Charles and Heath believe the first franchises will go to employees and customers.

“We also did a radio campaign in Calgary, and we’re launching a video on our website so people can learn about why they should join our team,” Charles says. “A lot of people find the beauty industry very sexy, so I think we’ll attract people who want a business but aren’t hairdressers.”

“We’re looking for individuals who are passionate about the fashion and beauty industry,” Heath says. “But at the core, candidates will be selected based on their entrepreneurial and business-management skills.”
Charles maintains they will be there for their franchisees every step of the way.

“We have schools supporting the areas where we want to franchise to help with hiring,” Heath says. “It’s a hub-and-spoke business model.”

Franchise owners will go through a six-week training program that covers core values, operations and leadership—a full training on running the business. There’s also a two-week program for service providers with day-long updates on trends every spring and fall.

Refresher courses will also happen a few times per year for franchise owners. “Franchisees will use our computer systems and all our professional and retail products, including a few external lines,” Charles says. “Retail is a large part of our business model—it makes our salons even more of a destination.”

Another perk for franchisees: Charles sells her products online, saying when one controls the distribution, it channels retail sales back to stores.

Mapping Out the Future
The deal with Hudson’s Bay provides Charles with many tailor-made locations for her salons, but she’s still open to going into strip malls with high-end restaurants or other areas that meet the EvelineCharles salons’ criteria.
For now, Canada is where Charles plans to stay but the U.S. is not off-limits.

After 43 years running and growing a successful business, Charles feels confident that franchising is the right move for growth.

“We know what the industry needs,” she says. “There’s not another model like this in North America. We have schools, salons, coaching, retail.”

EvelineCharles corporation sets franchisees up for success, but their revenue will depend on how aggressive each entrepreneur wants to be.

“How many franchises will they buy?” Charles says. “Will they double shift? There are a lot of possibilities. Lina and I are really excited to help people get really profitable—we’re excited to help grow entrepreneurs.”