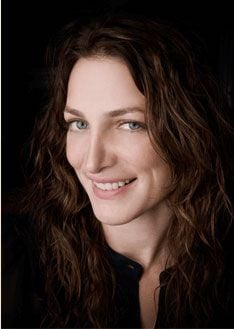 Career Other than Hairdressing: Herbalist or Chef

Now reading: Carl Sagan’s Science as a Candle in the Dark

Title of your autobiography: "How I Blew (as in blow-dry) My Way Through Hollywood"

My Mantra: It IS possible!

Early Beauty Moment: “My mom likes to tell a story that I got my comb taken away in the 4th grade because I was combing my hair too much.”

Diana Schmidtke, a celebrity men’s groomer whose impressive roster of clients includes Hollywood’s hottest leading men including George Clooney, Robert Pattinson, and Chris Hemsworth, saw her career path pointing toward beauty after she had been on the receiving end of a hairdresser and makeup artist’s expert touch.

“I was asked to be a model for Nexxus at the Midwest Beauty Show,” says Schmidtke, who is also the author of Shortcuts, a book that advises freelance artists on breaking into the entertainment industry. “After they did my hair and makeup, I felt so good about myself, and the hairdressers looked like they were having so much fun, I thought, ‘I want to do this.’”

At Pivot Point Academy in Chicago where she did her training, she was further inspired by members of the International Pivot Point Cutting Team who would visit the school. “I realized then that I could really go global with this, that there was so much potential. It was very inspiring.”

After graduation, Schmidtke set her sights on Chicago’s Trio Hair Salon, with the ambition of training under Philip Palmeri, a former head colorist for Vidal Sassoon. “I really wanted to work with Phil because I wanted to do color but when I called they said they weren’t hiring. So I called every week until they said they were hiring. I was going up against an established stylist for the job but I got it because I could be molded and trained.”

While working seven days a week at two jobs (she was also on staff at a restaurant), Schmidtke took a well deserved spring break to a sunny destination and seeing the blue ocean and feeling the warm air convinced her she was through dealing with Chicago winters. She packed up and headed to Hollywood.

“LA was tough. At the time, licensing reciprocity didn’t exist and I had a lot of trouble finding a salon job but I needed money immediately. I managed to get a job at a production company as a receptionist. Portfolios for freelance makeup artists and hairdressers would come across my desk so I learned what they looked like and what was needed to build a book of work.” And what she took from this was that while her color and styling skills were strong, she needed to strengthen her cutting skills, as well as learn to do makeup to be a well-rounded artist. She returned to Chicago and took classes on “anything that was offered.” When she came back to Los Angeles, she was ready.

“On my first trip to LA, I met this guy Marvin who was a signed hairstylist at the Celestine Agency and I looked him up after makeup school and he was astonished at how much I had learned. I became an always-requested assistant for makeup artists all over town, especially those who couldn’t do hair. I was able to build my book and within six months, I was a signed artist at Celestine.”

At the time, no one was exclusively grooming men, including Schmidtke, who still loved doing girl hair. “There was no reference point and I didn’t know you could have a whole career doing just men. Then one day, I was working on a shoot and in the studio next to us was a friend of mine who said their groomer was a no-show and I was asked to help out. They were shooting with David Boreanaz (of “Bones” fame) and while I told the editor on my job that they would be my priority, I stepped in to help. The publicist said ‘I’m going to make it up to you,’ something I had heard a lot at that point, but this time, it came through.” This one good deed on her part opened the doors that have stayed open for Schmidtke. She has appeared three times on “Oprah” as a men’s grooming expert, was profiled in the New York Times and travels the world with her celebrity clients. And she has chosen to share her good fortune by writing Shortcuts, to help aspiring freelance hairstylists and makeup artists take the necessary steps to success and avoid the pitfalls. “I felt compelled to give back after all the enormous blessings I’ve received. I wrote it on planes, during press junkets, in hotel rooms. I recently taught a class and someone showed me a first edition of Shortcuts that was taped and stapled together, with notes all through it, and I felt so good seeing this, knowing it is making a difference in how people approach this business.”

Schmidtke says no one is teaching the real truth about men but she wants to start telling it. “I want everyone to know that men’s grooming is more than just hair. Even the consultation is different. Also that men are a different kind of buyer; men listen to their hairdresser but you have to gain their trust and I don’t think this is being properly taught. My dream is to work with a company to develop a men’s grooming line of tools for hairdressers along with education about how to sell product to a guy, and how to keep a guy in your chair for life.”