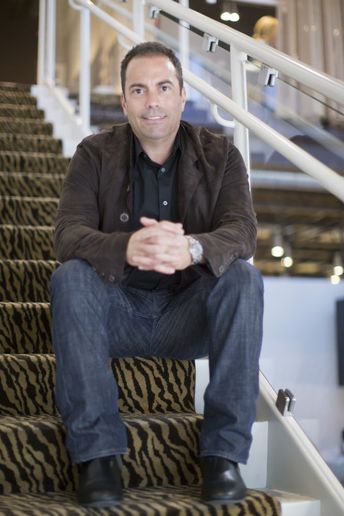 Ross Bartolomei has been in a salon environment nearly all his life. When he was three years old, he’d wait around while his mom, a hairdresser, worked. Today, at age 47, Bartolomei owns two Salon Hype locations in suburban Chicago. Between being three and being 47, Bartolomei has trained a lot of other stylists, has been the hairdresser on such John Hughes Productions as Uncle Buck and Curly Sue, has been featured in Allure Magazine—and has completed treatment for diffuse large B-cell lymphoma, a blood cancer.

“A recent study covered on Good Morning America had my phone ringing off the hook!” Bartolomei reports. “They took 450 hairdressers and found a high level of carcinogens in their blood.”

Bartolomei probably will never know whether there’s a link between his career and his 2013 diagnosis. Either way, Bartolomei believes that it’s in his best interest and that of his staff to maintain as natural a salon environment as he can. His no-jets pedicure equipment attracts clients who don’t want to worry about hidden bacteria. He uses L’Oréal’s INOA hair color, Keratin Complex smoothing formulas and non-corrosive nail products. He’s even started his own hair care line, Hype Solutions.

“We already were trending in the ammonia-free direction,” Bartolomei says. “Continued exposure to ammonia fumes can cause chronic illnesses—and it’s not good for the hair. Now that I’m not around it anymore, whenever I take a whiff of ammonia I can really feel it! Polyparabens are used widely to make products look better, but here in Illinois they will be banned starting in a few years. Benzene helps the hair color stay longer, but benzene is a derivative of crude oil and can cause health issues as well. When you’re a hairdresser, you might be putting color on 15 heads a day.”

Always health-conscious, Bartolomei says being in shape made his cancer treatment much easier than it could have been.

“My oncologist said my body would handle the chemo better because I had so much strength,” he reports. “I used to see 22 clients a day—100 a week. You have to be in fantastic shape to do that.”

Bartolomei feels that being in tune with his body also helped catch the cancer early, because he quickly noticed some pain in his back. Seeking help with that resulted in discovering his lymphoma.

With his chemo treatment finished, Bartolomei tends an organic garden and has reconsidered his work schedule. He now sees clients only three days a week and spends more time with his wife and kids. His future looks bright, and that means he’s still dedicated to the career he loves, and he's shopping around for a third Salon Hype location. But now his dedication includes spreading the word about chemical-free alternatives.

“Soon we’ll be among the 3% of salons that are completely ammonia-free,” Bartolomei says. “It’s just the beginning of a big movement to provide people with healthier and better alternatives. About 20 years ago a client sitting in my chair who had moved from California wanted to know where he could find organic food here. I just laughed. But today we have organic food everywhere. That’s where we’re going in hair.”

Stress Induced Hair Loss? Black Women Are Among the Most Vulnerable

The study of epigenetics is just beginning to reveal the lasting impact of ancestral memory on the health and well-being of Black Americans. There is no overnight recovery to be had - but you can still be kind to yourself, and your hair, today.

We Need a Mental Health Vacation: Strategies for Getting Away From the Stress

Nearly 8 in 10 adults (78%) say the coronavirus pandemic is a significant source of stress in their lives, while 3 in 5 (60%) say the number of issues America faces is overwhelming to them. We take a deep breath and consider two proven stress relievers: meditation and mindfulness.

Can an app with a scanner attachment actually improve the quality of your client service and boost your take-home income with very little extra effort on your part? The answer is yes! Orlando Rodriguez, owner of the Orlando Salon in Houston has discovered a new artificial intelligence system that he calls “life changing.”

The Healthy Hair Regimen That Can Help You Generate More Revenue

FIBRE CLINIX’s customizable, healthy hair care will help you create bespoke, premium treatments for your clients – services they’re only able to get in-salon from a professional. The curated care will keep them coming back, allowing you to generate more revenue per service, as you restore clients’ hair back to healthy conditions.

Healthy Hair From the Inside Out

When hair is thinning, it can feel devastating. Here, MODERN SALON Artist Connective members show how they incorporate Viviscal Professional for healthy hair growth in their everyday work, helping those clients who want to get their hair back.