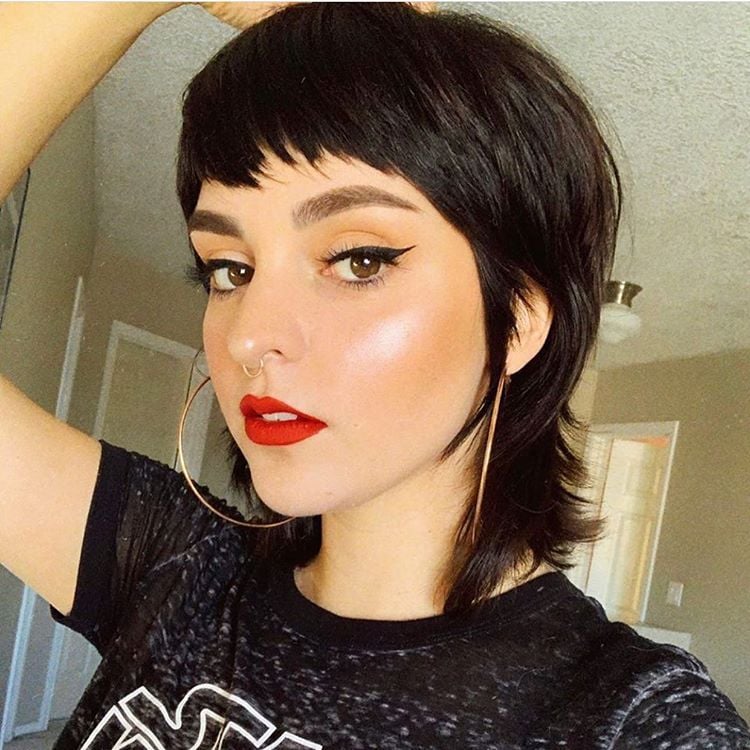 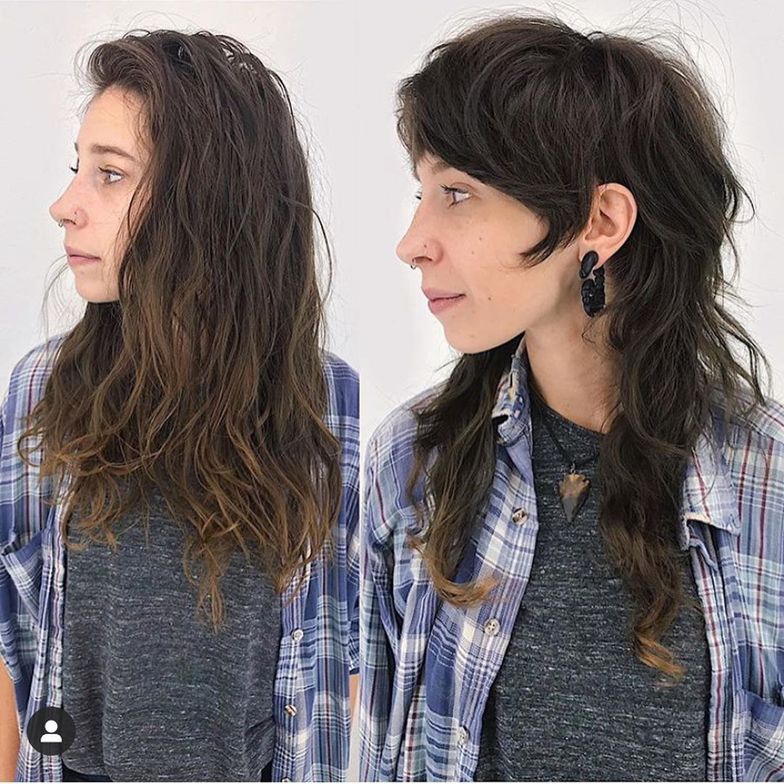 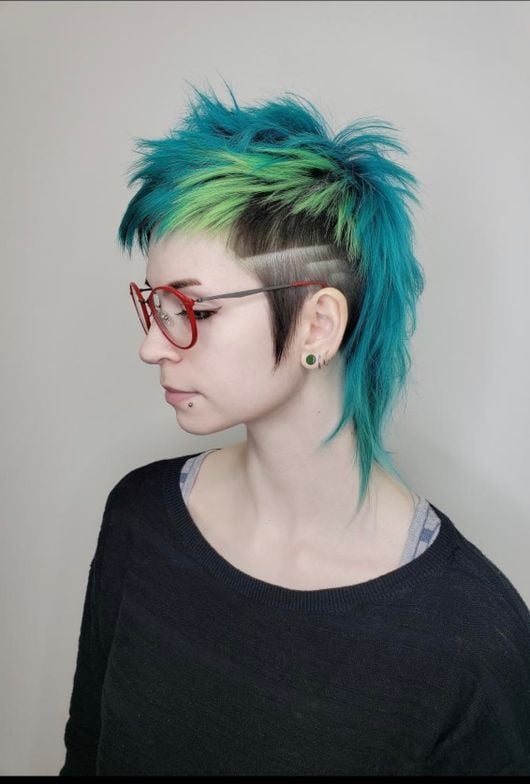 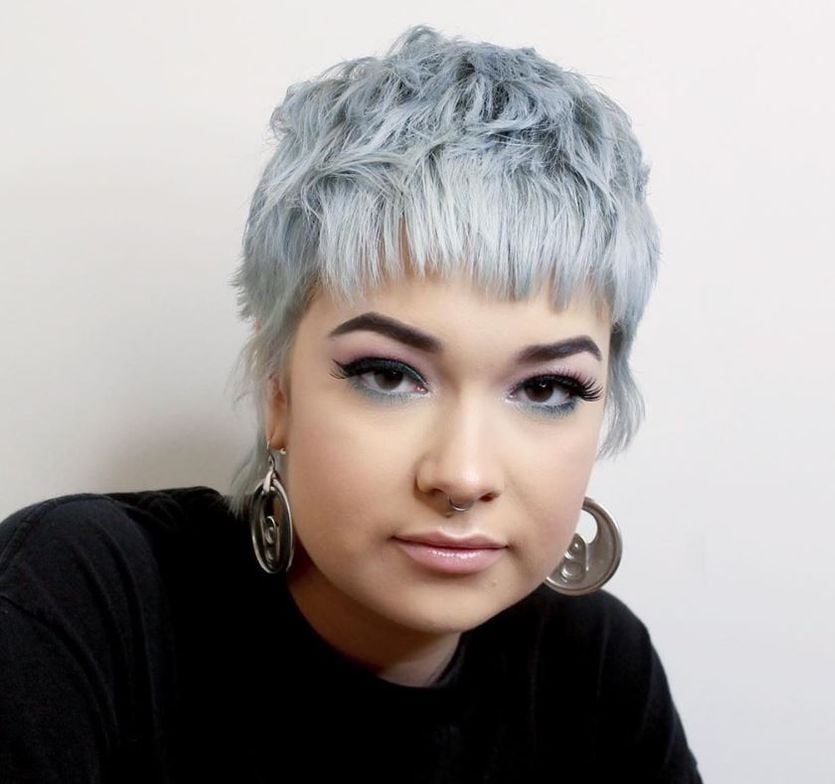 This micro-mullet is so beautifully offset by this steel-blue haircolor. 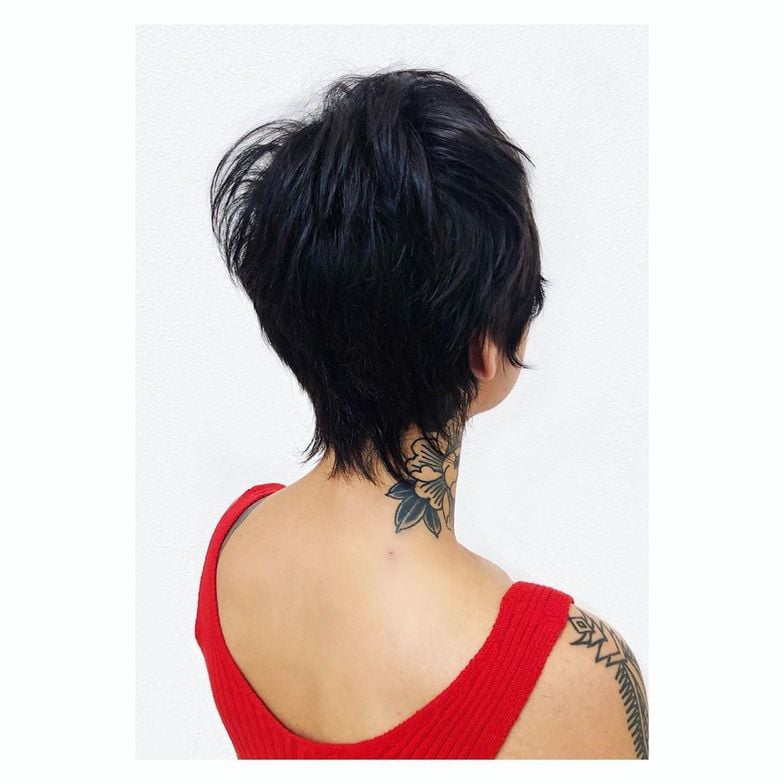 Loving the graceful shape down the nape in this mullet cut. 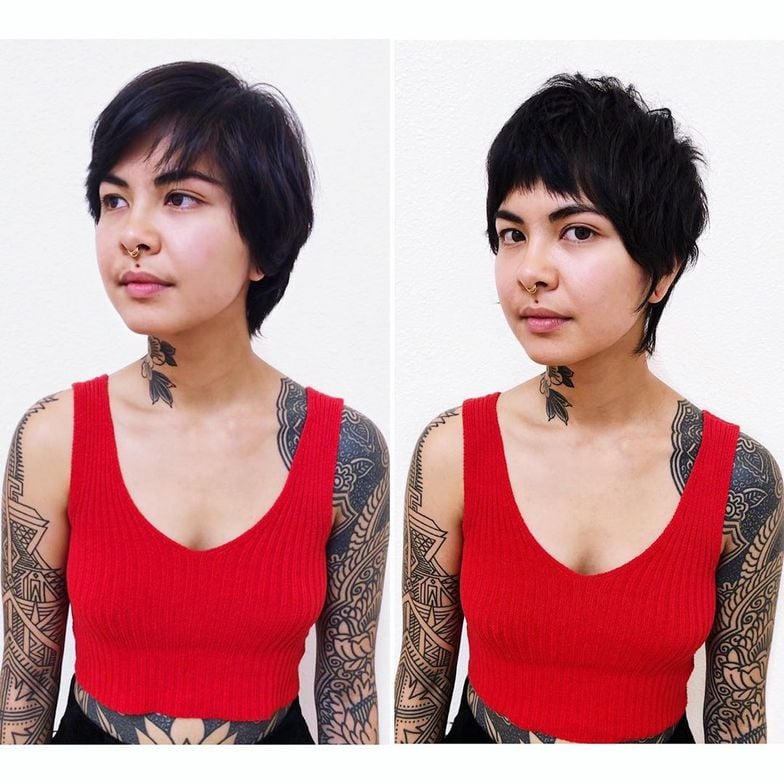 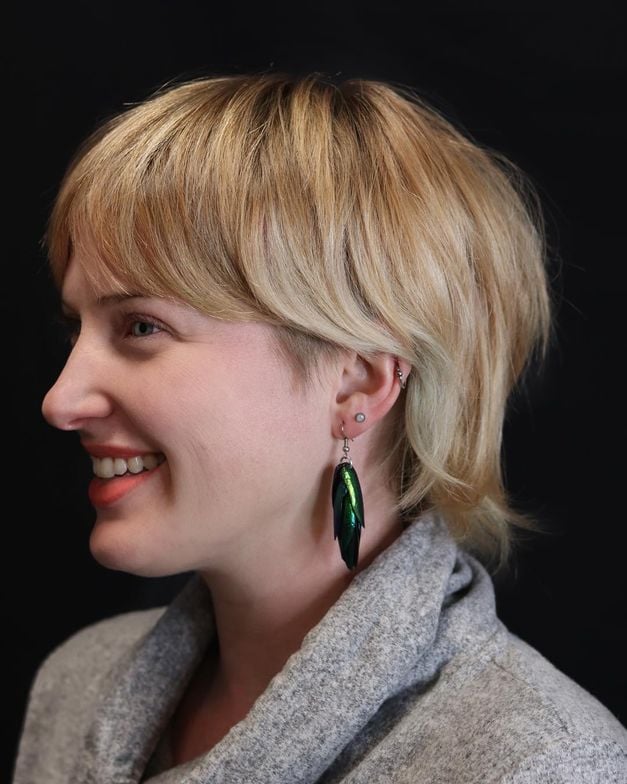 When one has a statement haircut, one looks awesome wearing statement earrings. 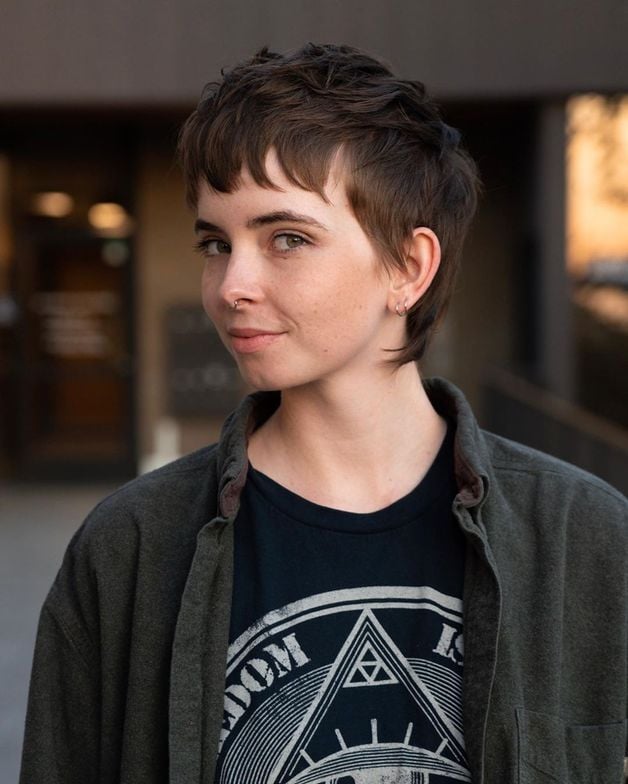 A micro-fringe and a close crop make this mullet very rock-and-roll. 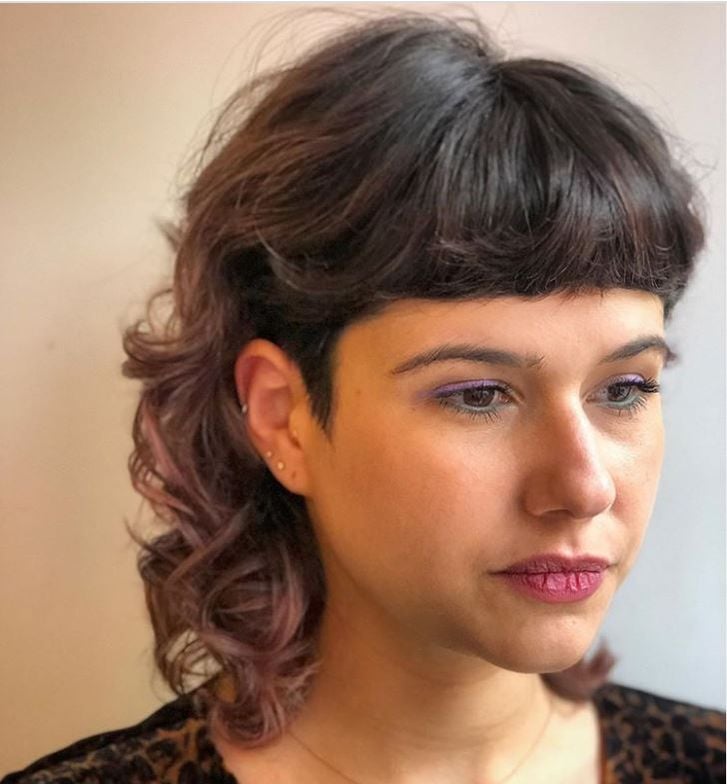 Blunt fringe offset by the organic shape in the back. 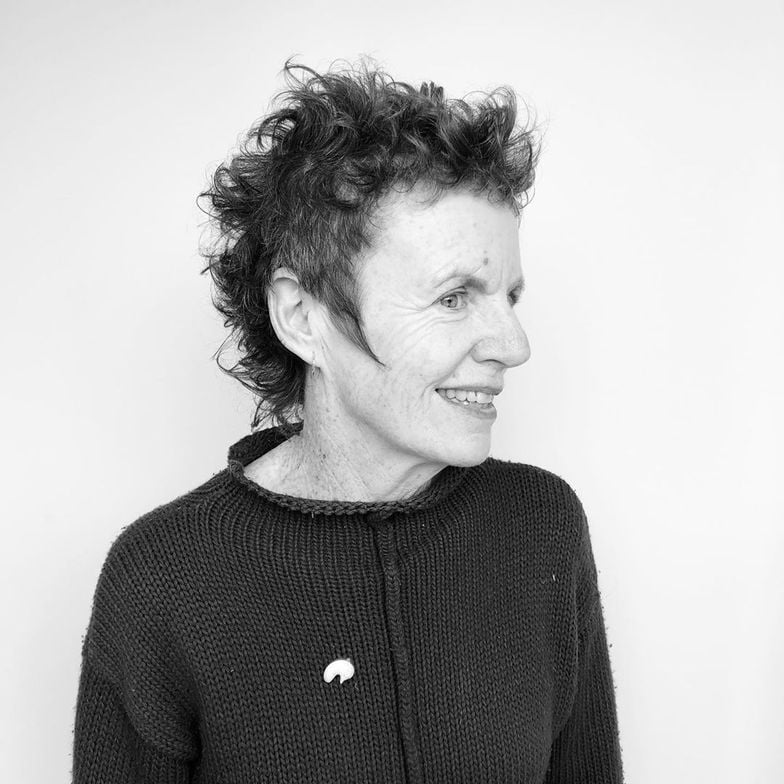 The mullet has no age restrictions. Anyone can rock the ‘business in front, party in the back’ esthetic. 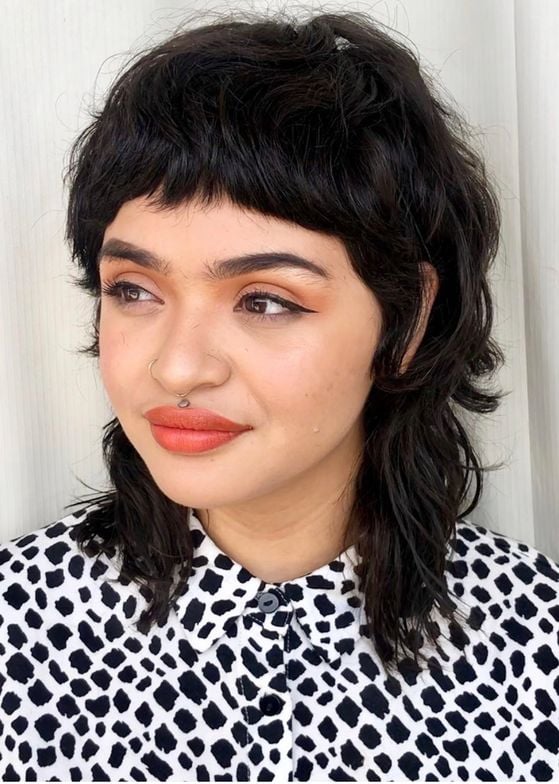 This micro-mullet is so beautifully offset by this steel-blue haircolor.

Loving the graceful shape down the nape in this mullet cut.

When one has a statement haircut, one looks awesome wearing statement earrings.

A micro-fringe and a close crop make this mullet very rock-and-roll.

Blunt fringe offset by the organic shape in the back.

The mullet has no age restrictions. Anyone can rock the ‘business in front, party in the back’ esthetic.

Business in the front, party in the back, that's how you used to describe a mullet cut. Today, a trend that was sometimes looked on as a haircut gone sorely wrong has re-established itself in so many variations. Sometimes your mullet is a mullet-pixie and sometimes it's a mullet-shag. It might have been shaped by a razor, it might be buzzed up into a mohawk and it might be a teeny-weeny-micro-fringe-wispy-bits-at-the-nape-mullet. Whether mini, micro, mohawk or pixie, we wanted to know more about the re-emergence of the mullet.

We spied some must-have mullets by Reilley Jenks (@alottavagyna), a hairdresser at Lavish Hair Lounge in Albuquerque, and asked her to give her take on the mullet and why it’s been staging a comeback the past few years.

“I think people have come to this point in self-expression where hair provides so much fun for people,” Reilly says.  “And I think a mullet is such a great way for people who like to do things a little bit different to set themselves apart.  I think the expression of hair has changed so mullets have become more acceptable.”

So what makes a mullet?

“A mullet is classified as having a shorter fringe, something above the eyebrow, and the top or the areas around the ears being much shorter; it can be personalized for whoever is wearing it,” Reilly continues. “I generally do like for them to be blended vs disconnected though that's a personal choice. I’m so drawn to a mullet-shag which is to me the perfect haircut.

"I cut my mullet with a razor because I like to achieve an edgy and soft look around the face, particularly, though I might do some finishing with shears once the hair is dried just in case there are any areas that are a little heavy. (I don’t dry cut with a razor.)  When I dry the hair, more often than not I am diffusing it because I love to play with people’s natural texture.”

Check out the slideshow of mullet shapes and click through to see other work--mullets and more--from these talented stylists.

Leverage Yelp's “Bangs Insurance Giveaway” to open the discussion about a small style change with the big impact of "fringe" benefits.

In a city where women favor the long, beachy wave, Reno Prezio's clientele come for his pixies, bobs, and big chops, mixed in with a bit of barbering.

What is TikTok's Wet Mop Haircut?

The haircut popular among Gen Z.

How to Cut and Style the Viral Octopus Haircut

Move over, wolf cut—the octopus haircut is set to take over in 2022.

How to Cut and Style a Bixie Haircut

A Sit Down With V's Barbershop

Emily Hutcheson-Brown, Chief Operating Officer for V’s Barbershop, tells us about the company's secret sauce, how the industry has changed, and more.

Your Scissors Can Improve Your Wellness in the Salon

Best Shag Haircuts for Any Length

The Shag Cut continues to surge in popularity because of its incredible versatility and is a haircut that never seems to go out of style. Here are examples of shag-tastic cuts on all different hair types.

He relies on BARBICIDE products to ensure that his Philadelphia-based space is sanitized and ready for guests.

Trending Haircut: Pompadour with a Twist

Patrick Butler, Technical Director — Education/Operations at Floyd’s 99 Barbershop, breaks down one of the freshest cuts for fall.