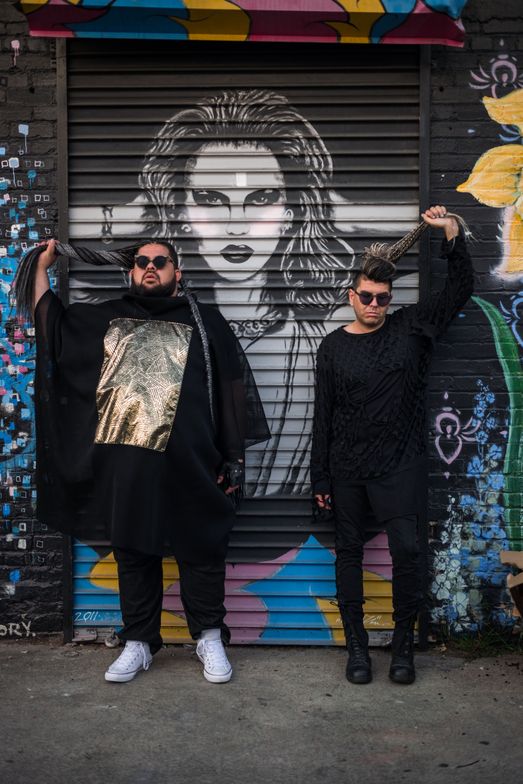 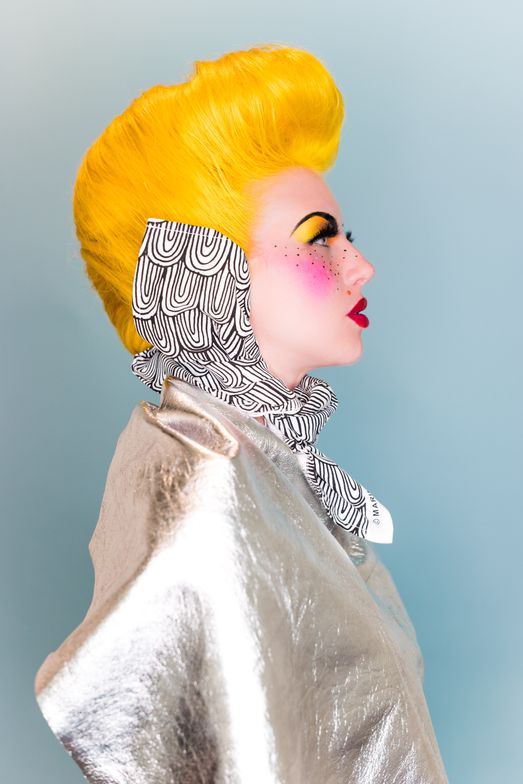 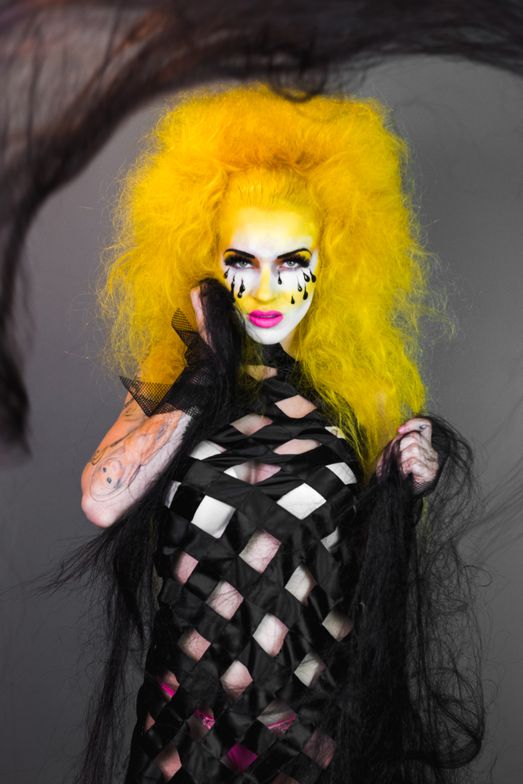 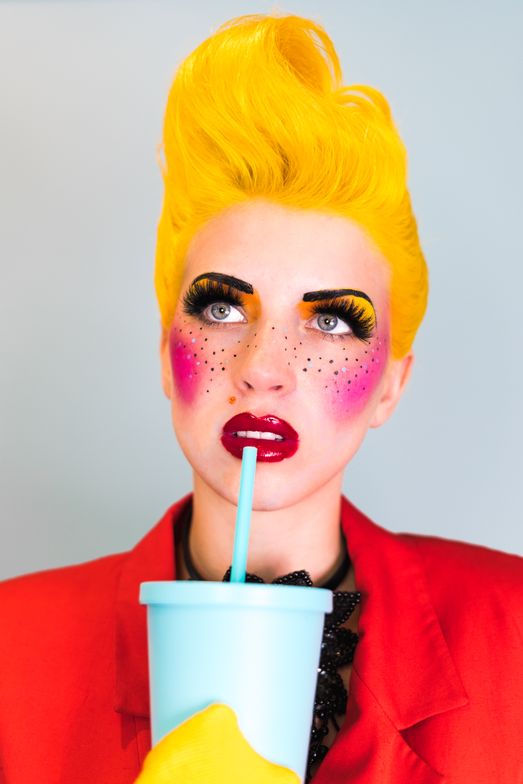 The duo of Joe Espinoza (@joedoeshair) and Roger Lopez (@rogerdidit), partners in a salon inside a  gallery in Los Angeles and collaborators on creative projects, crank out photo shoots from within their intimate space that look big budget and long on time.  But these two have neither.  Calling on a network of friends and fellow creatives, the two find other talented artists who  want to get together and see what happens.  And as they organize these photo shoots in those stolen moments between back-to-back clients, MODERN was fortunate to spend some time with this power set and find out how they put together eye-popping images, shot on a simple backdrop, within their tiny creative incubator.

“It’s very DIY,” Roger says. “I made the dresses she wore and each look took a lot of time.  I also did the makeup and it’s all stage effects, very high-quality.”

Joe: Our photographer, Jenae Lien (@jenaelien) is someone we met through a friend and we felt so lucky to find her.  She is very busy, traveling and working, but we found time to do this shoot before she left town for three months to scout locations.

Roger: The really great thing about her is that she comes into the shoot only to document what is going on which makes it really easy to work with her.  She is eager to understand the concept and to catch it through our eyes. She doesn’t have an alternative agenda other than achieving our agenda.  She detaches from her esthetic.

Joe: And our pictures pop out of her profile in her book.

Joe: I wanted to do something very simple. I was inspired by who our model is already, in her everyday life, and I just wanted to elevate it. I had to retouch and refresh all the yellow with a great Schwarzkopf Professional yellow. The best situation is not to do the color on the day of the shoot, obviously, or you will lose your mind.

Roger:  We each wanted to have our own look.  Joe’s went from Stepford Wife to Riot Girl, from concept to creation.  I opened my bag of tricks and said, let’s rope her braids with black, which meant she couldn’t be Stepford, anymore. It took it to a whole new place.  We ended up with a North Korean flight attendant.

Joe: The idea I came in with was a neon, 1950s housewife, and I knew I wanted to do a Victory Roll and then elevate that a bit.  I wanted it to be masculine, actually, but with feminine touches.  I wanted a powerful girl. Then Roger kept saying, big hair, big hair, more extensions, and I honestly didn’t know exactly where we were going.

The whole yellow haircolor came from a yellow in Schwarzkopf’s Essential Looks.  I wanted to have my own Essential Looks moment. That needed to happen.

Roger: There was an episode of RuPaul’s Drag Race that had a Lady Gaga wearing a yellow wig that she called, ‘Urine Yellow.’  That urine yellow has been on my mind ever since and if you go back to older wig catalogues, you will see this particular color described that way—not canary yellow but urine yellow. We tapped into a synthetic world.

We knew we had clients first thing in the morning the next day, so we are picking everything up and trying to keep the space neat as we went along.

Roger: Our concepts can warp really quickly.  If the photographer was able to stay, we would have done a fourth look.

Roger: Working together like this, we edify each other.

Joe: Even though it’s so exhausting, I wish we could do a shoot every day.

How To Perfect Your Copper Color Formulas

A coppery red keeps things spicy, but there’s one thing you MUST include in your formulas for proper color deposit. Here’s how South Carolina-based stylist Aly Davis nails the vibrancy every single time.

Blonde This Way: Paul Mitchell Professional Offers Many Ways to Lift and Lighten

Light this way. A full portfolio of products will help you achieve your perfect blonde.

Transformation: From Grown Out to Dimensional Bronde

There’s no better feeling than bringing life back into long, grown out hair. Colorado-based stylist Amy Baugh recently transformed a client who had her first appointment after almost a year without any color service - and you just have to see this high contrast ribbon foilyage for yourself.

Redken Brand Ambassador Johnny Ramirez @johnnyramirez gives us a look at the steps he takes when creating his trademarked  Lived In Color™.

This green glows. Get the detailed steps and formulas and recreate it.

Formula Alert: Face Frame, Toner and Base for a Gorgeous Glow-Up

This gorgeous glow-up was created by Alfaparf Milano’s US National Artistic Director Cassie Siskovic @cassiskovic. She creates rich depth, throughout, and a flattering frame of light around her client’s face.

Inside Kim Lee's 12-Hour Color Transformation for the MTV Awards

How to Get the Richest Brown Color EVER

Dark brown is one shade that will never go out of style. Here, Los Angeles stylist Justin Toves-Vincilione shares the steps for a bold, luscious hue that will be your favorite new look.

In partnership with Redken

How to Preserve and Protect Your 'Make Me Blonder' Clients

Once you give your clients a taste of lighter hair, it’s often the same. The next time they’re in your chair they’re begging, “Can you make me blonder?” Hair color pros know that’s a tricky question because the lighter you go, the more you risk damage. But now stylists have found a way to safeguard hair health, with up to eight levels of lift.

Step into the light with Goldwell's new family of products that perfectly balance care and color.

It's the launch you've all been waiting for! Remove faded red, blue, green, purple and more to always leave your client's hair with a clean slate.

Get the Formula for This Glowing Golden Balayage

This summer is all about glowing, sun-kissed hues. Get the steps for this natural golden balayage from Laura Gibson, Rusk global artistic director.